Is Capitalism All about Dog-Eat-Dog Competition? 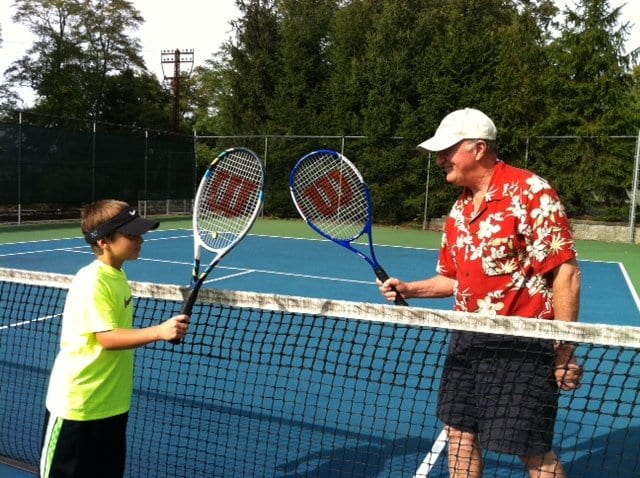 “Markets are a vast cooperative enterprise in which buyers and sellers work together to set prices and allocate resources. Transactions occur without coercion and, in fact, occur only with cooperation.” 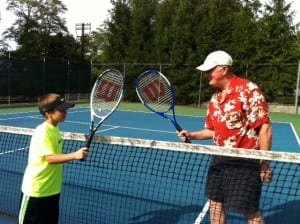 Yesterday, I played “Ten Tennis” with my grandson Luke (age 9). I invented this new version of tennis called “Ten Tennis” to make the game more enjoyable when two people have significant differences in ability (which happens quite frequently, I’ve found). The standard game of tennis is a highly competitive one: “I win, you lose.”

But with Ten Tennis, the game suddenly becomes cooperative. Basically, we begin with the regular serve, but the idea is to work together and hit the ball toward each other and keep the game going for at least ten volleys. Once we keep it going for ten volleys, it becomes competitive and we see who can win. We tied in two games, 3-3, and 6-6. It’s the only way to play tennis!

I suggest you try it with your kids. It is fun and can even be exhausting. I estimate you spend five times more hitting the ball than picking up balls.

Now, if only we could get Obama and the Republicans to play cooperative “Ten Tennis.”

What does Ten Tennis have to do with Austrian economics and capitalism? Actually, they have quite a bit in common. Most commentators view capitalism as a “dog-eat-dog” form of greedy capitalism, but the reality is that there is a lot more cooperation in capitalism than most people realize. Millions of workers, suppliers, landlords, bankers and capitalists must work together to move unfinished resources and products along the supply lines toward the final retail product that a consumer or a firm can use.

This is the essence of the “I, Pencil” story that Leonard Read wrote years ago. To read or listen to the story, go here. People from around the world cooperate to make a pencil.

In my Austrian-style textbook (now in its 4th edition), I use a simple but powerful four-stage model to demonstrate the cooperative nature of the production process: 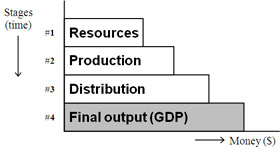 In the above diagram, all of the factors of production — capitalists, landlords and workers — must cooperate to move down the supply chain toward final consumption (stage 4).

Surprisingly, “Economic Logic” is the only textbook that has this diagram. If you are interested in obtaining a copy, call Eagle Publishing at 1-800/211-7661. “Economic Logic” retails for $69.95, but you pay only $34.95, plus $5 for shipping & handling (S&H) for U.S. orders. For all orders outside of the United States, add an additional $20 for airmail shipping). Be sure to mention code ECON4 for the new 4th edition.

You can see why the public takes a dim view of politics and Congress. Here the impasse on Capitol Hill has forced the government into a shutdown mode, and what does the Obama Administration do?

1. It closes its Websites, even though most of these Websites can run on their own. For example, I went to the Bureau of Economic Analysis (www.bea.gov), the federal Department of Commerce that puts out gross domestic product (GDP) and other economic statistics, and it states, “Due to the lapse in government funding, www.bea.gov will be unavailable until further notice. This includes access to all data and the e-File system.”

This is a complete falsehood — BEA doesn’t need government funding to keep the BEA website running. It runs on its own.

2. The federal government has closed all the national park services, even the ones that are run privately without government funding, and monuments, even though many of them (like the Vietnam memorial) don’t require supervision.

More than 1,000 privately operated parks were required to close during the government shutdown — even though they receive no federal funding. Here’s the story: http://perc.org/articles/tale-two-parks.

The only reason the Obama Administration is doing this is to embarrass the Republicans and force them to give in to their demands. Meanwhile, the public be damned.

Last week, I was glad to see a group of Vietnam Vets decided to storm the barricades erected by the Obama administration at the Vietnam Memorial in Washington, D.C. God bless America, the home of the free and the land of the brave!

To read my e-letter from last week’, please click here. I also invite you to comment about my column in the space provided below.