Tough Talk, Kids: This Is Not A #StockMarketCrash

It’s the Reaction, not the Details, that Matter 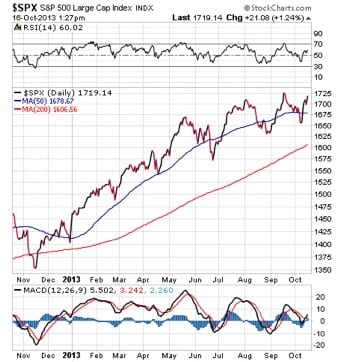 For more than two weeks there has been a partial shutdown of the federal government, as Republicans and Democrats in the House of Representatives, the Senate and in the White House battle over the budget and how much of our money they plan to keep borrowing and spending.

This morning, there appears to be a compromise deal on the table reached in the Senate to end the government shutdown and to raise the debt-ceiling limit so that the politicians can borrow more money, get us further into debt and gain more and more fiscal influence over the economy.

Now, as of this writing (midday Wednesday), a final deal hasn’t been agreed upon, although it certainly appears that we will get a deal done by tonight, before the somewhat opaque debt-ceiling deadline of Oct. 17. Of course, the details of the deal are not as important, at least from an investment standpoint, as the market’s reaction to the details.

So far today, the markets are up more than 1% across the board, as traders like the fact that the Washington-induced uncertainty may finally be off the table, at least for now. 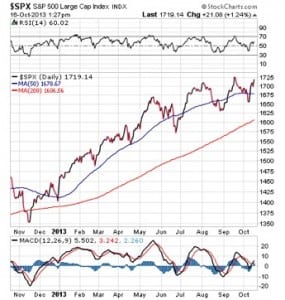 If, in fact, a deal is reached tonight, the market can then turn to more fundamental factors for direction, the most immediate of which is third-quarter earnings. So far, earnings have been decent, but not spectacular. My ballpark estimate, based on what I’ve seen so far from the companies that already have reported Q3 results, is that about 30% or so have already guided Wall Street forecasts lower for the coming quarter and full year.

Some companies are using the uncertainty in Washington as a convenient reason to say that the economy and, by extension, their respective businesses, may suffer a slowdown due to the government shutdown. I suspect this caution is more hyperbole than reality, but the bottom line is that unless we see earnings come in strongly this quarter, the markets might be facing an uphill battle for the remainder of the year.

I think the key for investors here is to watch the market reaction during the next several days to any deal out of Washington. If stocks continue to be bid up from here, it will be a sign that the bulls have more gas in the tank. If, however, the markets fail to race higher, or if there is a marked post-deal sell-off, then look for the bears to stalk the streets of Lower Manhattan in the weeks to come.

Now that it appears that a deal is in place in Washington, we need to turn our attention to one key metric that affects all financial markets. That metric is interest rates.

Interest rates are either going to be a headwind for the economy or a tailwind going forward, and watching the key indicators here that allow us to determine the prevailing winds is going to be the key to our investing success.

Right now, the yield on the 10-Year Treasury Note is about 2.69%. This metric is important, because it determines the cost of borrowing for mortgages, business loans and other borrowing. 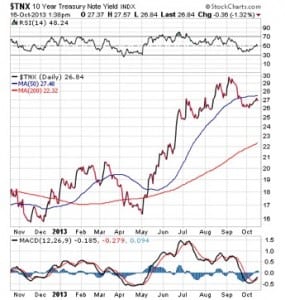 As you can see by the chart here, the yield on the 10-Year note declined sharply from its September high of nearly 3%. The decision by the Federal Reserve to hold off on any tapering of its bond-buying program was a key factor in this decline. Of course, yields have crept higher in October as fears over the government shutdown and a failure to increase the debt ceiling caused traders to position themselves for a “risk-off” situation in bonds.

Exclusive  The Long Trend Turns Up

The bottom line here is that if you want to know whether interest rates are going to help, or hurt, the economy going forward, it is essential to watch the movement in the 10-Year Treasury note. Doing so regularly will give you a much better handle on the markets, and your money.

A Thought on Compromise

“The swift wind of compromise is a lot more devastating than the sudden jolt of misfortune.”

While most people probably are happy that there appears to be a compromise deal finally ironed out that will raise the debt ceiling and end the government shutdown, keep in mind that compromise isn’t always a good thing. In his quote here, Swindoll reminds us of the long-term danger when compromise is the goal rather than real solutions. 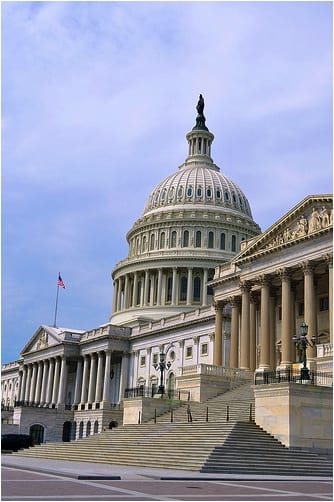 U.S. stock indices rose quickly after Senate leaders from both parties forged an agreement to raise the United States’ borrowing power and end the current fiscal impasse that has shut down the U.S. government since Oct. 1.

Exclusive  A Confession of Character