After dipping last week, stocks are back up after Fed Chairman Ben Bernanke announced that the Fed would continue its easy-money policies this year. I’ve already noted how the money supply (M2) is growing rapidly, all apparently in an effort to re-elect President Obama and to help Bernanke keep his job. As a result, the U.S. government is running massive deficits to pump money into the economy. The situation is reminding me of 2008, when the Fed lost its political independence during the Great Recession.

In the short term, this stimulus is showing positive results. Employment is recovering slowly and real gross domestic product (GDP) is advancing at a 2-3% rate. The slight economic improvement might well be enough to re-elect President Obama.

Last week, I spoke at the Investment U conference at the Grand del Mar Resort near San Diego. As master of ceremonies, I had the chance to listen to all of the general session talks by such experts as Rick Rule, Keith Fitz-Gerald, Alex Green and Karim Rahemtulla. Like all investment conferences, there were bulls and bears taking sides on where the markets were headed, with Keith Fitz-Gerald taking the optimistic view and Eric Sprott making the case for a bear market.

One of the hottest debates was on China. Keith Fitz-Gerald, Lou Petrossi and Frank Holmes argued that China’s economy would continue to grow, though at a slower pace, but would not suffer a financial meltdown. Carl Delfeld and I countered that China has engaged in artificial stimulus that can’t last, just as the real-estate boom in the United States didn’t last.

One of the most fascinating talks was by Lou Basenese, who talked about the incredible advances in technology that are coming these days. Lou spoke about a surprising new technology, 3-D printing, which actually simplifies manufacturing tools that require new specifications. The technology is quite a breakthrough. He also talked about a medical breakthrough that can let a sophisticated new printer use biological material to grow tissue to treat medical conditions. Who says that the world of technology is stagnating?

By the way, the Oxford Club and its editors (Alex Green, Lou Basenese, Keith Fitz-Gerald, Karim Rahemtulla) are co-sponsors of this year’s FreedomFest and will have an Oxford Club Day there. And Laissez Faire Books is the official bookstore. (See my upcoming appearances below for details.)

“You Blew It!” — Obama for Working Americans?

“Join Michelle and help Barack stand up for working Americans.”

I laughed when I saw this new ad headline for Barack Obama’s re-election campaign. The Obamas are standing up for working Americans?

Maybe they mean the working poor and middle class. Obama favored the extension of the middle-class tax cuts. Yet the cost of living continues to rise, especially the price of gasoline (now over $4 a gallon). The rising price of gasoline can’t be good for working Americans.

And the Obama administration has discouraged companies from hiring workers because of new regulations, such as ObamaCare and Dodd-Frank.

Maybe they mean union workers. They are the only group of workers who have consistently supported President Obama’s re-election.

My wife and I are working Americans, but he is determined to raise our taxes substantially (for anyone earning more than $250,000 a year).

The fact is the percentage of Americans participating in the labor force has declined to 63.7%, its lowest level since the Great Depression. (See chart below.) In fact, in February, 1.2 million people dropped out of the labor force in one month! 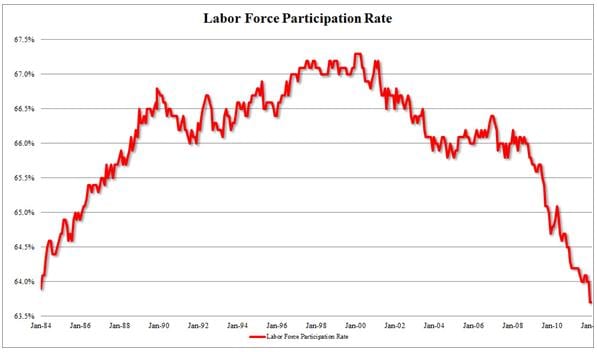 previous article
A Div PRO Case Study for the “Forbidden” Income Strategy
As a new subscriber to Dividend PRO, you're probably curious about the "forbidden" income strategy that can boost your income returns to your Dividend PRO holdings.
After studying the special report that you received with your Dividend PRO subscription, you already know that this strategy involves selling call options "against" your actual stock holding. This strategy puts money in your brokerage account from Day One. The