What has Contributed to the Falling Deficit

Doomsayers at various investment conferences, including FreedomFest, have been predicting “the end of America” and massive deficits in the United States. But so far, they have been dead wrong.

Deficits have been shrinking since 2009, when we hit the bottom of the Great Recession (see the chart below). Indeed, the U.S. deficit now is under $500 billion a year, less than 3% of gross domestic product (GDP). 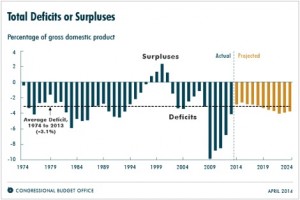 That’s not to say we are out of the woods. The national debt is still growing. It has topped $17.5 trillion and is projected to reach $27 trillion within 10 years. If you include the unfunded liabilities of Social Security and Medicare, our real indebtedness exceeds $83 trillion, according to a new report by the Cato Institute.

Cato’s Michael Tanner points out that Social Security, Medicare and Medicaid alone account for 48 percent of federal spending today, a portion that will only grow larger in the future and increase more rapidly with the government’s newest entitlement program — Obamacare. The simple truth is that there is no way to address America’s debt problem without reforming entitlements.

Are there any leaders in America willing to step up to solve this problem? If not, the American dream is going to be a pipedream for most Americans.

You Blew It! Incompetent U.S. Immigration Bureaucrats Blow It Again

At last month’s FreedomFest in Las Vegas, we had six delegates from Poland. We should have had more than 20. But the U.S. embassy in Warsaw refused to grant more than a dozen tourist visas to these Polish people who wanted to come to the big show. These were top-quality citizens and good people who have the financial means to come to the United States. They love America and wanted to participate in our festival. There’s not a terrorist among them. But my government, in its infinite wisdom, turned them down for no good reason.

It is worse for foreigners who might have an Arabic name. Take Mehmet Koksal, the project officer for the European Federation of Journalists. He’s a Turkish citizen with a Belgian passport who regularly had visited the United States and frequently attended meetings at the U.S. embassy in Brussels where he has met Michelle Obama, Hillary Clinton, John McCain and Rudy Giuliani, among others. He has no criminal record.

He bought tickets for his wife and children to visit New York and Florida, but then he suddenly was turned down by the U.S. Department of Homeland Security’s Electronic System for Travel Authorization (ESTA).

Despite “in-depth interviews” and numerous requests for an explanation, he never got one and was forced to cancel his trip at a huge cost.

His story is told in today’s Wall Street Journal. Read and weep for our country.

Sadly, the U.S. government is making enemies out of our friends.

Where’s the outrage? Where’s the apology? I am ashamed of my country’s government.

In case you missed it, I encourage you to read my e-letter column from last week about the value of using gross output as an economic indicator. I also invite you to comment in the space provided below.