Bruce Lee vs. Ayn Rand Philosophy: Which is Better for Investors? 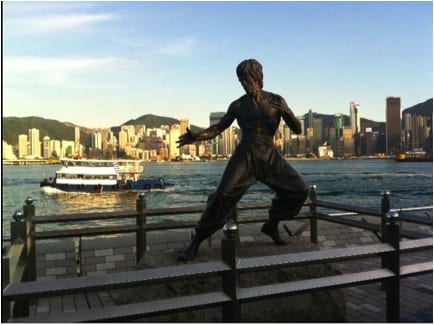 I spent the last week in Hong Kong at the Mont Pelerin Society meetings. While there, I visited the Bruce Lee exhibit that was held at the Hong Kong Heritage Museum. I took the metro, which is clean and top quality (our New York subways are Third World compared to Hong Kong’s metro). The ride I took in Hong Kong was just half an hour and I had fun checking out the city.

Lee’s statue is one of only two along the Avenue of the Stars next to the Kowloon side of Hong Kong’s Victoria Harbour waterfront. Bruce Lee is by far one of the most famous Asian-Americans. He is a remarkable success story, even though he died young at the age of 34. He was born in San Francisco of Chinese parents, spending time in both the East and West. He was happily married to an American and had two children. He founded a new martial art system, Jeet Kun Do, and became an extremely popular Asian actor, despite numerous setbacks.

It appeared that millions of dollars had been spent on the Bruce Lee exhibit to tell the story of his life in pictures, films, letters, endorsements, high tech sound, etc. It was most impressive. I recommend that you visit the next time you are in “Asia’s World Capital.” (See photo above of Bruce Lee’s statue positioned along the Avenue of the Stars in Hong Kong.)

Lee is famous for his philosophy. For example, he said, “Do not pray for an easy life. Pray for the strength to endure a difficult one.”

“Enter the Dragon,” his classic film, is one of my favorites. I like the line of philosophy he gives his son, “Don’t think, feel!” His philosophy is in direct contrast with the objectivist Ayn Rand, who said in her book “Atlas Shrugged,” “Don’t feel, think!”

Who’s right? Actually, the most successful investors avoid emotion in their investment decisions. Joe Kennedy, who had the cool nerves of a gambler, never let emotions affect his investments. “Emotions are your worst enemy in the stock market,” counsels Don Hays, a stock market commentator. Lowell Miller, a successful money manager, states, “Successful investing requires a Spartan attitude, a warrior attitude in which feelings are kept on hold.”

Yet at the same time, if you are feeling really nervous about an investment, it might be best to stay away and look for another opportunity that seems to be a safer bet.

My motto is a combination of the two mottos, “Think first, then feel if it’s right.”

But my old friend and technical trader Jim Dines might say it best, “Don’t think, look!” (at the charts, that is).

You Blew It! Is Canada an Ideal Model for Big Government?

“Canada has pursued policies well to the left of those south of the border [USA].”
— Paul Krugman

Paul Krugman, winner of the Nobel Prize in economics, must be living on another planet. His column in Monday’s New York Times expressed the astonishing claim that Canada is some kind of showcase for big government.

He stated, “Canada is prosperous, economically stable… and has successfully pursued policies well to the left of those south of the border [USA]: single-payer health insurance, more generous aid to the poor, higher overall taxation.”

Isn’t Canada the country that rejected standard Keynesian economics in the 1994-95 crisis there by laying off federal workers and reduced the deficit, and then went on an 11-year supply-side tax-cut revolution?

Isn’t Canada the country that recently cut its corporate tax rate to 15% compared to 35% in the United States? Even if you add in the additional taxes at the province level, Canada’s overall corporate tax rate is around 26%, compared to nearly 40% in the United States (combined national, state and city tax rates). Isn’t that is why Burger King is moving its headquarters to Canada?

Isn’t Canada the country that is now ranks #6 in the world in the Economic Freedom Index while the United States has dropped to #12? According to the Heritage Foundation/Wall Street Journal, which put out the annual Economic Freedom Index, “Canada has solidified its status as a free economy, thanks to improvement in investment freedom, the management of public spending and monetary policy.”

With a score of 80.2, up 0.8 from last year, Canada is one of just six economies worldwide that ranked as “free,” according to the results. (Hong Kong is #1.)

Since the index started two decades ago, Canada has boosted its economic freedom score by 10.7 points, the biggest improvement among developed countries. “A transparent and stable business climate makes Canada one of the world’s most attractive investment destinations,” says the report.

As far as Canada’s national healthcare system that Krugman applauds, that too is being threatened by free-market reforms.

In case you missed it, I encourage you to read my e-letter column from last week about a top economist warning about the creation of a welfare state — our biggest obstacle to prosperity. I also invite you to comment in the space provided below.

previous article
Consider Investing in Dividend Dandies
next article
Are You Profiting from Living Longer?