There’s no denying the tremendous performance of domestic equities in the first quarter of 2012. The Dow surged some 8% during Q1, but that jump was small potatoes when compared to the 12% gain in the S&P 500 and the whopping 19% spike in the NASDAQ Composite. These gains are impressive even during boom times, but considering they’ve come in the face of weak economic fundamentals, more debt woes in Europe, and a slowing Chinese economy, the gains through the first three months of the year have been truly impressive.

Today, I’ve read several stories about Wall Street analysts that remain wildly bullish on the domestic equity market. Some stories have claimed we have a lot more room to run, and that stocks could soar another 30-40% this year. According to one analyst, the Fed’s low interest rate policy has made traditionally less risky assets much more risky than investing in stocks. He thinks the lack of yield on cash and bonds will drive more money out of these assets and into stocks. In turn, he predicts much more equity buying. 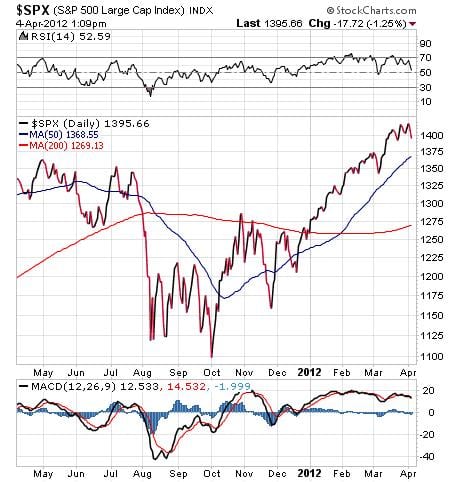 This thesis is interesting but I suspect it won’t come to fruition. I think the more likely scenario is that this bull will run out of gas sooner rather than later. In fact, during the last two trading days, we’ve seen stocks come under pressure from the realization that the Federal Reserve won’t be extending its current bond buying program. Then there’s European worries creeping back into the market (more on this in a moment).

We now are seeing stocks fall below 1,400 on the S&P 500. The 1,400 level is important, since the S&P has been trading around that mark for the past several weeks. I think the next big test for this bull will be earnings. Over the next several weeks, we’re going to get a sense of how companies did during Q1 2012. If the top and bottom lines are strong, and especially if corporate outlooks look promising, we could see more buying.

On the other hand, failure to meet expectations and/or muted outlooks by corporations for the remainder of the year really could cause a rapid sell-off that you won’t want to get caught in.

I continue advising readers of my Successful Investing advisory service to approach this market with extreme caution, and not to get caught in a bull trap.

If you’d like to find out when the time is right to safely get back into stocks, then check out Successful Investing today.

Recent events in Spain have emerged that make the country the next potential hotspot that could flare up into a recessionary fire inEurope. The latest headlines inSpainreveal that the nation’s budget/deficit issues are coming to a head.

Yesterday’s bond auction in Spain was pretty weak, with the country only selling 2.3 billion euros worth of 4-8 year debt at yields sharply higher than previous auctions. Spanish bond yields have risen back above 5.5%, and that trend doesn’t augur well for the country’s economy, or the European Union. It also doesn’t bode well for Spain’s stock market, which has pulled back significantly over the past year. 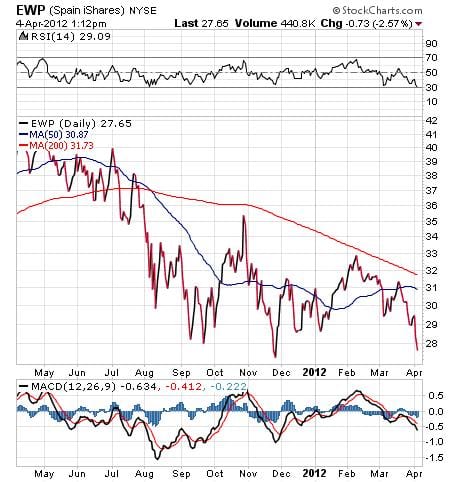 The chart here of the iShares MSCI Spain Index (EWP) shows the cratered sell-off in the country’s stock market. I think this situation could be the first big domino to fall in the European Union. If we see Spain go the way of Greece in terms of having to impose hefty austerity measures, it could put some serious pressure on global markets going forward.

Now, lest you think I’m too concerned about the situation in Spain, consider what the country’s Budget Minister Cristobal Montoro said in a recent news conference after delivering the nation’s cost-cutting budget.

“Spain is a critical situation,” Montoro said. “That is what we’re trying to address.”

When you consider that Spain will borrow 186.1 billion euros this year, and that its debt-to-GDP ratio will rise to 79.8% from 68.5% in 2011, you get a sense of the problematic situation. Then when you factor in that the European Union limit on debt-to-GDP ratio is 60%, you see thatSpainis in dire straits.

So far, the selling in Spanish stocks hasn’t had a big impact on global equities, but all of that could change quickly if we see Europe’s debt issues continue to spread to more and more countries.

The humor-laced lyrics of singer/songwriter Todd Snider often contain a whole lot of wisdom. Here he points out that most people don’t make the most of their mental abilities. I’ve always strived for as much clarity as I can, and to focus as much as possible on all of the important issues in life. Now, there’s probably no more important issue than making sure your money is working for you and your family. So, when it comes to your finances, don’t just use 3% of your brain.