The Forbes 400: Is the American Dream Still Alive?

“I’ve been involved in three or four start-ups. This is the country where you can do it. Nowhere else.” — John Kapoor, an American from India and a member of Forbes 400

Our goal is to bring together a “Dream Team” of experts in topics from science and technology, healthy living and history to geo-politics, business, economics and investments that will not just rehash the problems but will offer real solutions to the world we face today. I think we’re off to a good start.

Steve Moore & Paul Krugman Debate “How Can We Best Restore the American Dream?”

We will have a series of dream debates, and we’ve just confirmed our Dream Debate of the Century pitting Steve Moore, the #1 Supply Sider and Wall Street Journal columnist, against Paul Krugman, the #1 Keynesian and New York Times columnist (and Nobel Prize winner). They will debate the question, “How Can We Restore the American Dream?”

Sign up to receive a special “early bird” discount.

This year’s issue of the Forbes 400 Richest People in America is about the American Dream. In fact, one member of the Forbes 400 will be speaking at next year’s big show: Peter Thiel, a famous technology venture capitalist (Facebook, PayPal). 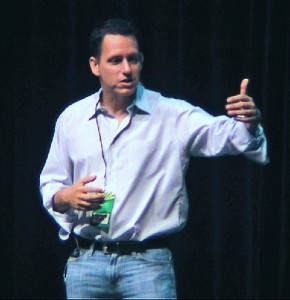 I’ve been collecting every issue of the Forbes 400 since its inception in 1982, and I look forward to learning more about wealth creation with each issue.

This year, Forbes has a fascinating chart of inherited vs. self-made wealth. The chart shows that during a 30-year period, 1984-2014, more self-made billionaires are beating out the inherited billionaires.

In 2014, the trend continued, with only 125 of those on the Forbes 400 getting their money primarily from their parents or grandparents, while the vast majority, 275 of them, blazed their own money trail.

Forbes magazine concludes, “The American Dream, it seems, is alive and well.”

The 30-year chart just goes to show that it’s easier to make money than to keep it or inherit it.

Sign up Now for the Dream Conference of the Year

Note to Travelers: According to the Forbes 400 issue, Las Vegas is the #1 most popular destination for air travelers, based on an analysis by Hopper of 271 million online flight searches made last year. Airfares into Vegas are relatively cheap, and we’ve once again arranged for a low $108 per-night rate at Planet Hollywood. Join us for the “world’s largest gathering of free minds.”

You Blew it! Book Publishing is Flourishing — Thank Goodness!

I sometimes thought I’d someday have to write a horror story called “The Last Bookstore,” a time in the future when bookstores gradually declined to the point where the last one (Foyles in London, The Strand in New York, or Powell’s in Portland) closed their doors for good. To me, that would be a nightmare. Where would I go to browse, one of my favorite pastimes? Amazon? No thanks.

E-books and the closing of bookstores are one consequence of the new generation that I don’t like.

And I’m glad to see that books and bookstores are surviving and maybe even making a comeback. Granted, the large chain stores are either closing (like Borders) or cutting back (like Barnes & Noble). Barnes & Noble is closing a hundred stores a year and is down to 600 or so, due to Amazon (which controls nearly half of total book sales). Too bad. But small independent and used bookstores have been expanding since the end of the 2008-09 financial crisis, and sales are up.

E-books now represent 30% of consumer book sales, which don’t include professional and educational books. The volume of physical books is steady, and profits are down only slightly. According to the Economist (October 11, 2014), more than 1.4 million ISBNs were issued last year, and that’s not counting many e-books without an ISBN. Sales of e-readers (such as Kindle) are now in decline.

Self-publishing of physical books has skyrocketed, according to the Economist magazine. Nearly 450,000 self-published books were printed last year. It is no longer looked down upon. Even major authors are going the self-publishing route to save time and money.

In case you missed it, I encourage you to read my e-letter column from last week about the greatest triumph in Austrian economics since Hayek won the Nobel Prize. I also invite you to comment in the space provided below.

Following last week’s introduction to exchange-traded fund (ETF) provider Vanguard and its low-expense-ratio funds, we turn our attention today to an offering with a 0.05% expense ratio.