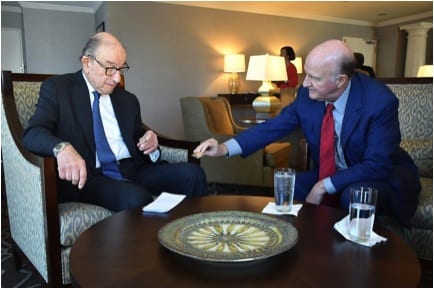 “The Federal Reserve is not independent!” — Alan Greenspan

During the weekend, I spoke at the 40th anniversary of the New Orleans Investment Conference and had a great time meeting up with subscribers and signing dozens of copies of “The Maxims of Wall Street” as gift books. I even took several subscribers out to dinner at Commander’s Palace.

The New Orleans Investment Conference is largely a gold bug convention, with representatives from dozens of small mining companies exhibiting. It has been a tough couple of years. Precious metals topped out in late 2011, when subscribers to my investment newsletter, Forecasts & Strategies, took profits on our gold and silver exchange-traded funds (ETFs). After that, the mining business has been a disaster.

The fear of rising rates was on the minds of the attendees and speakers. Rising rates mean a strong dollar and more weakness in commodity prices.

I had lunch with former Fed Chairman Alan Greenspan during the New Orleans Investment Conference. 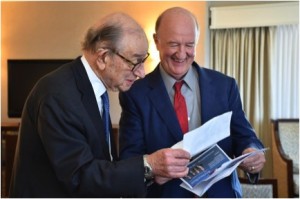 I showed Greenspan a picture of the diminutive Milton Friedman standing next to the tall John Kenneth Galbraith with the caption:

Greenspan thought it was a funny line and laughed out loud.

Then I showed Greenspan a 2014 American eagle silver dollar (see photo at top of page) and asked him, “Have you seen one of these before? Do you know what it is?” I had bet my friend Gary Alexander that Greenspan wouldn’t know. After examining it carefully for a minute or two, Greenspan said, “It doesn’t look like the silver dollars I own.” He told me he collects Peace and Morgan dollars (minted prior to 1921). Then he said, “I’ve never seen one of these coins before.” I explained to the #1 Money Man in the United States that it was an official legal tender silver dollar issued by the U.S. mint, which has been producing them since 1985 (under the American Gold and Silver Eagle Act signed by President Reagan) and that 40 million are minted every year. He was astonished.

Greenspan would be a perfect witness for the defense in “The Federal Reserve on Trial,” our mock trial at next year’s FreedomFest. I can see Bob Murphy of the Mises Institute (the prosecuting attorney) asking Greenspan, “At what point in your career on Wall Street did you meet up with Mephistopheles and decide to renounce your mentor Ayn Rand and your support of sound money [gold] and sell your soul to the Devil himself, the Federal Reserve?”

Gary Alexander did ask a similar question more politely in New Orleans, and Greenspan answered, “I never changed my philosophy or my views, but in the real world, everything has to be compromised.”

I also asked Greenspan if he knew about the mortgage fraud in sub-prime and no-documentation loans going on prior to the 2008 financial crisis. He admitted he did. I then pointed out that Ben Bernanke, Greenspan’s successor, was well aware of his responsibilities in regulating the banks. I attended a talk given by Bernanke at the American Economic Association (AEA) meetings in January 2007, where he used the words “panic,” “crisis” and “stress” 34 times. He anticipated trouble before the real estate collapse of 2007 and the financial crisis of 2008.

Then I asked Greenspan, “Should Ben Bernanke have been fired as the chief banking officer of the United States for knowingly allowing the mortgage frauds of subprime and no-doc loans?”

He shook his head, saying, “The Fed’s job is primarily monetary policy, not bank regulation.”

One thing Greenspan did say that surprised everyone: “The Federal Reserve is not independent.” It is in bed with Washington, especially since 2008.

You Blew It! Another IRS Scandal

On the heels of the IRS scandal in 2012 where it was discovered that the IRS was targeting conservative “tea party” groups and denying them tax-deductible status, now comes a second IRS travesty.

Last Sunday, the New York Times had a cover story, “US Law Lets IRS Seize Accounts on Suspicion, No Crime Required.” Read it.

The article reported story after story of IRS officials freezing and confiscating bank accounts of innocent small business and restaurant owners who regularly deposit less than $10,000 in cash into their commercial banks. The IRS doesn’t even accuse them of a crime. Instead, the IRS just takes their money. It reminds me of the scandal in the 1990s when local police officers would stop travelers on I-95 in Florida and confiscate any cash they had on the suspicion that it was illegal funds.

Now the IRS is doing it on a federal level. The law originally was set up to catch drug dealers or tax evaders. If anyone deposits $10,000 or more in cash in a bank, or uses it to make a purchase, the receivers of the cash have to fill out a federal form.

Moreover, if anyone “structures” their deposits to keep each deposit under $10,000, it too is a violation of the law.

In either case, if you don’t report it, the IRS has the right to confiscate part or all of the proceeds.

The problem is that there are lots of legitimate businesses, such as restaurants or flea markets, that deal in cash. The IRS is assuming people are guilty and taking their money. They have to take the IRS to court to get their money back and that process is time-consuming and expensive. Many of the people who are victimized compromise and settle with the IRS, losing thousands or tens of thousands of dollars.

I hope this article causes Congress to wake up and stop this travesty of justice that has destroyed legitimate small businesses.

The American dream is slipping away, I’m afraid.

In case you missed it, I encourage you to read my e-letter column from last week about Paul Krugman’s take on the European economic model. I also invite you to comment in the space provided below.

With $43.1 billion in assets under management, VNQ is Vanguard’s fourth-largest ETF. Its competitive 0.1% expense ratio is 93% lower, according to Morningstar, than the average for similar funds.