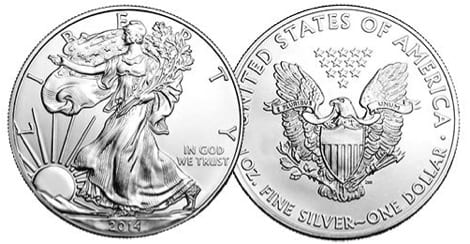 Surprise, surprise! Last week the terrorist group ISIS announced that it was issuing its own currency. Rejecting the paper money of the “tyrannical West,” the Islamic dinar will be denominated in gold, silver and copper coins. Finally, somebody is listening to Ron Paul… or Keynes, who famously called gold “the barbarous relic.” Now the barbarians are adopting gold!

Back here in the States, the U.S. Mint announced that it had temporarily run out of 2014 American eagle silver dollars. At $16 an ounce, investors were buying them at record numbers (40 million were sold last year).

And yet I’m always amazed how political conservatives know so little about the legal tender gold or silver coins that the United States has minted since 1985. 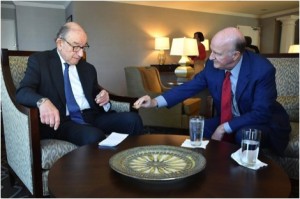 Last month at the New Orleans Investment Conference, I showed former Fed Chair Alan Greenspan an American eagle silver dollar, America’s symbol of sound money and liberty. (See photo of Alan Greenspan and me above.) Although he told me that he collects old Peace and Morgan silver dollars, he failed to recognize the new silver dollar or the 1-ounce American eagle gold coin. Imagine the #1 money man in the country not knowing that his own government mints millions of these silver and gold dollars every year.

Last week I was in Philadelphia for a private meeting (Liberty Congress) and Dick Morris was there. I showed him a 2014 American eagle silver dollar. He reacted similarly to Greenspan and said he had never seen one before.

Even Phyllis Schlafly, the #1 Conservative, didn’t recognize the Eagle silver dollar, even though her organization is called Eagle Forum and Reagan is her favorite president. It was Reagan who signed the American Eagle Gold and Silver Act in 1985, and the U.S. Mint has been producing one-ounce gold and silver coins ever since as legal tender coins.

I’m amazed at the level of ignorance about gold and silver in the freedom movement. I fear the history of sound money is being lost. I often hand out one of these Eagle silver dollars as tips, employee rewards or as a gift to celebrate a birthday, graduation or anniversary. I’m always shocked at how few people today recognize a silver dollar. Sadly, the vast majority of the millions of beautifully minted Eagles are hidden away in safe deposit boxes, not circulated like they used to be years ago.

These beautiful legal tender coins are hidden from the public — I tell people to keep a silver dollar in their pocket or their purse at all times and look at it from time to time. The American eagle has all the great symbols of America — Lady Liberty, the rising sun, the mottos “In God We Trust” and “E Pluribus Unum,” the stars representing the first 13 colonies and the bald eagle brandishing the arrows and olive branches (symbolizing the United States of America willing to defend itself but extending the hand of peace to all nations).

We’re trying to keep the honest-money movement alive at FreedomFest, my annual conference in Las Vegas, by making the American eagle silver dollar our symbol of sound money and liberty. We encourage everyone there to buy a silver dollar from the many coin dealers in the exhibit hall, then have a photo with the speakers at the end of the conference. (Can you see Steve Forbes in the photo?)

You Blew It! The Case for Higher Tax Rates?

“The American economy grew faster in the 1950s and 1960s when the tax rates were much higher.” — Lou Dobbs, Fox Business anchor

A popular myth, perpetuated by Lou Dobbs, is that the best period of economic growth was during the 1950s when the top rate was more than 90%.

One pundit expands the argument: “There is no historical evidence that tax cuts spur economic growth. The highest period of growth in U.S. history (1933-1973) also saw its highest tax rates on the rich: 70-91 percent. During this period, the general tax rate climbed as well, but it reached a plateau in 1969, and growth slowed down five years later. Almost all rich nations have higher general taxes than the U.S., and they are growing faster as well.”

Remember, in economics correlation is not the same as causation. There may be factors other than the tax rate to explain the performance of the economy. For example, during the 1950s, when the top marginal rates exceeded 90%, almost nobody paid those rates because of all of the loopholes in the law — tax shelters, trusts, offshore investments, etc.

The 1950s also may have benefited from a pent-up release of entrepreneurial stimulus following the Great Depression and World War.

Checking the academic literature on the subject of taxes and economic growth, the vast majority, almost 90%, conclude that increased taxes have a negative effect on the economy. This makes practical sense. Higher taxes raise the cost of doing business.

Of those studies that distinguish between the types of taxes, corporate income taxes are found to be most harmful, followed by personal income taxes, consumption taxes and property taxes.

My assessment: Economic growth could have been faster if tax rates and the burden of government had been reduced in the 20th century.

Ben Franklin said it best, “A virtuous and industrious people may be cheaply governed.” Do we have cheap government? When I make an appearance as Ben Franklin, I’ve asked this question to the audience, and no matter what their political affiliation, they all answer that government is expensive and no bargain.

Special Event Just Announced: I invite you to join my wife Jo Ann and me on the Crystal Symphony cruise ship for what could be the most interesting trip of your lifetime. I am pleased to announce that Newt Gingrich and his wife, children’s book author Callista Gingrich, will be joining us. As former Speaker of the House and an author and historian, Newt will give us his insights into the political and historical landscape of our day — you won’t want to miss this opportunity to meet one of the most powerful and influential political thinkers of our time. Join us on the Politics & Your Portfolio Cruise occurring September 13-20, 2015. I will be a featured speaker on the cruise that will travel from New York to Montreal. Other speakers include Eagle financial expert Chris Versace and estate planning specialist Jeff Verdon. Space is severely limited, so I urge you to sign up now. Go to www.PoliticsAndYourPortfolio.com. I hope to see you there!

In case you missed it, I encourage you to read my e-letter column from last week about an economics expert’s forecast for markets. I also invite you to comment in the space provided below.