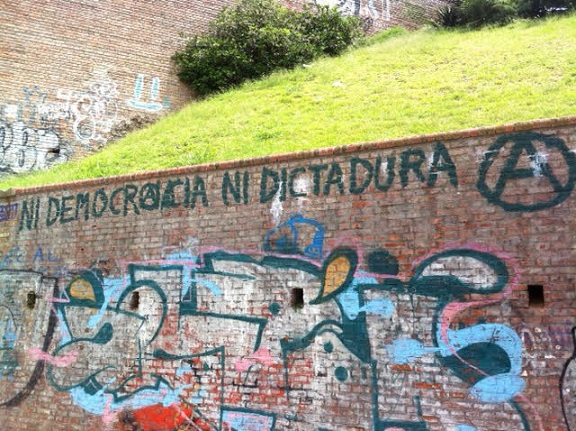 I spent a week in Rosario, Argentina, attending and speaking at an Austrian economics conference (www.austrianeconomicsconference.org). About 100 scholars, students and professors gathered at the conference, organized by Frederico Fernandez at the Catholic University. Speakers included Benjamin Powell of Texas Tech University (who spoke about anarchy), Pedro Schwartz from Spain (current president of the Mont Pelerin Society) and Kurt Leube of the Hoover Institution at Stanford University.

Several lectures addressed the issue of the ideal monetary standard, which for most Austrians is free banking or the gold standard. Adrian Ravier argued for dollarization of the Argentine peso, which is unlikely given the anti-American sentiment in Argentina these days. But Argentina needs some kind of stable policy as they are suffering from high inflation, crime and unemployment.

While jogging, I saw a line of graffiti on the wall in Rosario, suggesting “neither democracy nor dictatorship.” But what? I would suggest a republic — representative limited government.

What about monetary policy? My answer is “neither easy money nor tight money.” Stable, honest and sound money is the ideal, whether it be achieved by dollarization, a currency board, a gold standard or monetary rule.

I was pleased to see that my various books were popular at the conference. Adrian Ravier and Osvaldo Schenone (Universidad Francisco Marroquin of Guatemala) favorably reviewed my book “Vienna and Chicago, Friends or Foes?” at the conference.

I brought some of my books for sale, and all of them sold out. Lots of fans came up for autographs or pictures.

But the biggest surprise came after my lecture on “Gross Output: A Triumph in Supply-Side Austrian Macroeconomics,” about the new government statistic that measures spending at all stages of production. It is the first new macro statistic to come out since gross domestic product (GDP) was invented in the early 1940s. I first developed this concept of Gross Output in my book, “The Structure of Production.” I encourage you to read about Gross Output. 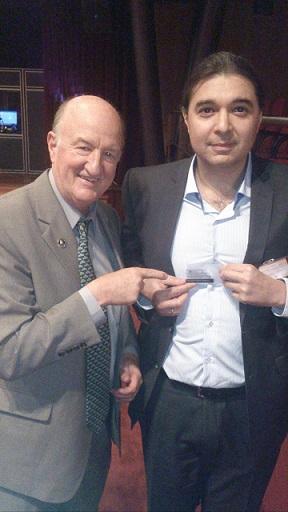 Here I am with Cesar Daniel Pailacura, a young economist in Argentina, at the conference in Rosario. If you look closely, you will see that his business card is a duplicate of my four-stage model of the economy taken from “The Structure of Production.” The first stage of his business card is his Facebook page; the second stage adds value with his personal email address; his third stage adds value with his personal phone number; and the final stage adds value with his full name, meeting in person. Clever! If you want to know more about the breakthrough Gross Output statistic, just Google “Gross Output, Mark Skousen,” and I’m sure lots of material will come up. Or go to www.mskousen.com.

Also at the conference in Argentina, I spoke with Kurt Leube, an economist at the Hoover Institution at Stanford University. When I told him about the Paul Krugman/Steve Moore debate at next year’s FreedomFest, his eyes lit up. “Krugman is the most dangerous man in the world,” Leube said, because of his huge influence in promoting big government policies.

Krugman is, in fact, highly influential. He was in Japan earlier this month and had a 40-minute meeting with Prime Minister Shinzo Abe to discuss how Japan can recover from a deep recession (real GDP is down more than 3% this year). Krugman has been an advocate of Abenomics, especially easy money in Japan and deficit spending. But, to his credit, he strongly opposes the increase in the national sales tax from 5% to 8% earlier this year, and he urged Abe to hold off raising it again to 10% as planned. Abe was convinced and postponed the tax increase for 18 months. This is probably the one area where Steve Moore and Paul Krugman will agree when they meet next July 9, 2015, at Planet Hollywood. But they are far apart when it comes to other policies — the minimum wage, budget deficits, easy money, flat tax, ObamaCare, inequality, etc., and the sparks will fly.

In case you missed it, I encourage you to read my e-letter column from last week about the importance of gold and silver currency. I also invite you to comment in the space provided below my commentary.

You Blew It! Stop Using ‘Black Friday’ and Change to ‘GREEN’ Friday

It’s Thanksgiving, but all the retailers can talk about is “Black Friday,” the terrible term they have chosen to promote a lot of wasteful consumer spending the day after this wonderful holiday.

I’ve campaigned for some time against this depressing term for the day after Thanksgiving and busiest shopping day of the holiday season. I prefer to call it GREEN Friday for a variety of reasons, and I’m happy to report that some retailers are now using this positive alternative.

It turns out that the first time Black Friday was used by retailers was in the 1970s, when police and bus drivers in Philadelphia complained about the heavy traffic and over-crowded sidewalks downtown during the first shopping day of the Christmas holiday season. The shops and streets were crowded all day long.

By the early 1980s, merchants started referring to “Black Friday,” based on the accounting practice of being “in the black.” According to this theory, Black Friday is the day when retailers no longer have losses (“in the red”) and instead start making profits (“in the black”).

As one reporter summarized the new view: “If the day is the year’s biggest for retailers, why is it called Black Friday? Because it is a day retailers make profits — black ink,” said Grace McFeeley of Cherry Hill Mall.

“I think it came from the media,” said William Timmons of Strawbridge & Clothier.

“It’s the employees, we’re the ones who call it Black Friday,” said Belle Stephens of Moorestown Mall. “We work extra hard. It’s a long hard day for the employees.”

Still, Black Friday has a stigma attached to it and is no term of endearment to most people.

Is there an alternative?

For several years now, I’ve campaigned for a better choice: Why not call it GREEN Friday? I give three reasons:

First, green refers to the color of the dollar bill. Since the Civil War days, the U.S. dollar has been called “The Greenback.”

Second, green is one of the most popular symbols of the Christmas holiday season.

Third, “green” is a positive term for a clean, sustainable environment.

Good News! Martin Bosworth, of ConsumerAffairs.com, wrote before his 2010 death that certain retailers are starting to refer to the day after Thanksgiving as “Green Friday,” to avoid the negative connotations of using the word “black.”

Mitch Goldstone, an online photo shop owner and credit card reform activist, has been calling it “Green Friday” as a “day without credit cards.”

“We’ve been drawing a lot of attention,” Goldstone said. “It’s being observed by a lot of big companies.”

And last year I saw a posting on the Best Buy website by a customer who wrote:

“I think it’s time for a change, and a new strategy. One should include overhauling the term ‘Black Friday,’ and coin it with a new term — ‘Green Friday.'”

To me, “Green Friday” makes more sense, because customers save a lot of green, and retailers see a lot more green. Also, I don’t think it would hurt to provide more “Energy Friendly” or “Environment Friendly” (Green Products) for sale during the event. A lot of people already know what Black Friday means. So, for some, when they hear Green Friday, that might catch their attention or at the very least pique their interest.

So from now on, let’s call it GREEN FRIDAY.