Janet Santa is Coming to Town: A Christmas Gift for You

“As long as the Fed is targeting another bubble in stocks in the name of a ‘wealth effect,’ we can expect this dance to continue.”

I was talking to a Citibank analyst last week, and he was convinced that “King Dollar” and the sharp decline in energy prices will be a boon for the U.S. stock market once lower energy prices spread throughout the economy like a gigantic tax cut.

What about Fed policy? I ran into Alan Blinder at a Christmas concert recently at Lincoln Center. Blinder teaches at Princeton University and is a former vice chairman of the Fed. I had invited him to defend the Fed at our mock trial at FreedomFest next July 10, but he declined due to other commitments. We hope to get Jeremy Siegel, the Wizard of Wharton, to take his place. Stay tuned.

Blinder is a big supporter of current Federal Reserve policy. While the Fed has stopped buying Treasury bonds and mortgages, and the monetary base is falling, the broad-based money supply (M2) is still growing at a 5-6% clip. Interest rates remain extremely low. The biggest threat to the five-year bull market is the global slowdown. Europe is hurting, China’s growth is below 7% and Japan is actually in recession.

In the face of another crisis on Wall Street (plunging oil prices and Russian ruble panic), Fed Chair Janet Yellen eased investors’ fears in a news conference, saying that the U.S. economic recovery still needs support from Fed stimulus. Yellen’s pro-stimulus comments signaled that the Fed would most likely maintain its ultra-easy monetary policy in the near term, sparking a rally on Wall Street.

There is no doubt that the Fed’s chair is concerned that a bear market on Wall Street will handicap the fragile U.S. recovery. That suggests more easy money as we head into the new year. Keep buying my favorite stocks — which also pay high dividends: www.markskousen.com.

During the past two months, I’ve sold more than 1,000 copies of “The Maxims of Wall Street,” my collection of old Wall Street sayings. One order came from Andrew Tisch, co-chair of the Loews Corporation, the value-oriented investment firm famous for its theaters and hotels. His father, the late Lawrence Tisch, founded the company back in 1946. Andrew was kind enough to send me Larry Tisch’s favorite rules of investing:

Money does not burn a hole in my pocket.
When there is nothing to do, do nothing.
Worry about the downside, the upside will take care of itself.
The numbers don’t lie.

I’ll be sure to add these to the 4th edition. “Maxims” is the best single source for investment advice, with sage quotes from Warren Buffett, J. P. Morgan, Peter Lynch and Dennis Gartman, among others. It makes the ideal gift for the holidays for investors, students, money managers and brokers. I’m offering this quality book for half off! The price is just $20 for the first copy, and all additional copies are only $10 each — postage paid and all autographed! If you order a box of 32 copies, the price is only $300 postpaid. Call Eagle Financial Publications at 1-800-211-7661, and mention code MAXIMH to buy individual books and code MARKB to buy a box. 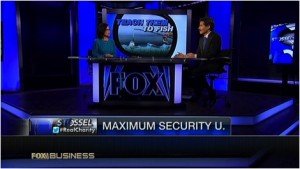 My wife, Jo Ann Skousen, an English professor at Mercy College, will be a guest on Stossel on Fox Business tonight at 9 pm Eastern, and her interview will be rebroadcast on Fox News this Sunday, Dec. 21, at 10 pm Eastern. She will be talking about her experiences teaching at Sing Sing Penitentiary, now called Sing Sing Correctional Facility, and for good reason. The college-degree program there has been the most remarkable success story in the criminal justice system.

Stossel will also show clips from the award-winning documentary, “Zero Percent,” about the Sing Sing education program. See why people like Warren Buffett are so moved by this story (he appears in the film). The documentary is now available for purchase, either by downloading it or buying the DVD: zeropercent.vhx.tv.

See Rick Santelli and Me on CNBC

Rick Santelli is a new supporter of my Gross Output statistic and has arranged to have me on First on CNBC “Squawk on the Street” at 10:40 pm EST on Tuesday, Dec. 23, to discuss it. I plan to debunk the Keynesian idea that “consumer spending drives the economy” and replace it with the supply side view that business investment, productivity and entrepreneurship drive the economy. Don’t miss it.

You Blew It! Goldwater was “Borked” — Voting Against the 1964 Civil Rights Act

Paul Krugman said Barack Obama is a “consequential” president, meaning his two major pieces of legislation, ObamaCare and Dodd-Frank, will alter the course of history in America. He’s right. Both laws will have long-lasting repercussions. But he’s wrong in saying that both laws are good. (I can’t wait for the Dream Debate between Krugman and Steve Moore at FreedomFest on July 9, 2015 — see you there!)

Another consequential politician was Barry Goldwater, the charismatic Republican senator and nominee for President in 1964. He lost by a landslide but influenced the course of history thereafter. On the positive side, he led the way for Ronald Reagan to be elected in 1980. But on the negative side, his decision to vote against the Civil Rights Act of 1964 — 50 years ago — was a fatal blunder for the Republican Party.

Goldwater personally was opposed to all forms of racial discrimination, was a member of the Arizona NAACP and voted for two civil rights bills in 1957 and 1960, respectively. But he decided to vote against the Civil Rights Act of 1964 because he firmly believed that two provisions were unconstitutional.

Based on work by Robert Bork, who would later be nominated to be a Supreme Court justice, Goldwater opposed the proposal because of Title II (public accommodations) and VII (fair employment). He predicted that “affirmation action” would result, and he was right.

Many conservatives decried the civil rights movement in those days as “communist” inspired. I remember those days well. But we were misled.

But legislation is all about compromise, and if every legislator voted against a bill because one part or another was unconstitutional, virtually no laws would ever be passed. Goldwater should have joined the majority of Republicans and voted for it, despite his Constitutional concerns. As Lee Edwards, Mr. Conservative at the Heritage Foundation and the author of a biography on Goldwater, told me, “I believe Goldwater was wrong to vote ‘no’ because Mississippi was burning, blacks had been waiting 100 years for their rights, and sometimes you have to do the right thing morally, regardless of the Constitution.”

Historically, one of the ironies is that more Republicans voted for the Civil Rights Act of 1964 than Democrats. But because Goldwater was “borked,” the Republicans lost a generation of support from the African-American community and minorities. Remember when the Republican Party was the party of Lincoln? Sen. Rand Paul is working to change that, but it may take another generation to make it happen.

In case you missed it, I encourage you to read my e-letter column from last week about a potential 2015 market correction. I also invite you to comment in the space provided below.

May you all have a wonderful merry Christmas and most prosperous New Year following Forecasts & Strategies.

What Dividend Increases Mean for a Stock’s Future

Next to profits, dividend increases are the mother’s milk when it comes to investing.