This Statistic Can GO Faster than GDP

Gross Output (GO), a broadened measure of U.S. economic activity published by the Bureau of Economic Analysis (BEA), grew to nearly $31.3 trillion in the third quarter of 2014, a 5.2% jump in real terms (annualized). The GO data released by the Bureau of Economic Analysis provides a measure of sales or receipts of all industries throughout the production process, including business-to-business (B-to-B) transactions that are excluded from gross domestic product (GDP).

As has been the case throughout the first nine months of 2014, GO advanced faster than GDP, which measures the value of final goods and services only. GDP rose 5.0% in real terms to $17.6 trillion in the third quarter of 2014.

However, GDP leaves out a big part of the economy, including business-to-business transactions in the production of intermediate inputs.

The GO data, a more comprehensive measure of economic activity than GDP, demonstrates that the economy is still accelerating. GO includes most B-to-B activity that is vital to the production process.

I first introduced Gross Output as a macroeconomic tool in my book, “The Structure of Production,” (New York University Press, 1990, with a new third edition coming in 2015). Now the BEA publishes GO on a quarterly basis in its “GDP by Industry” data, the first aggregate statistic to be published on a quarterly basis since GDP was introduced in the 1940s.

Gross Output and GDP are complementary aspects of the economy, but GO does a better job of measuring total economic activity and demonstrates that business spending is more significant than consumer spending. By using GO data, we see that consumer spending is actually less than 40% of economic activity, not the 70% figure that is reported by the media.

According to the Skousen BTB Index, which measures business-to-business transactions in the United States, total business spending throughout the supply chain reached $23.0 trillion in the third quarter of 2014, compared to personal consumption expenditures of $12 trillion. Thus, we see that business spending is almost twice the size of consumer spending in the U.S. economy. 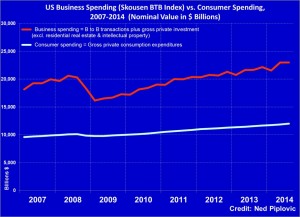 For more information on Gross Output (GO), B-to-B activity and their relationship to GDP, see the following:

Steve Forbes, Forbes magazine (April 14, 2014): “New, Revolutionary Way To Measure The Economy Is Coming — Believe Me, This Is A Big Deal.”

Mark Skousen, Forbes magazine (December 16, 2013): “Beyond GDP: Get Ready For A New Way To Measure The Economy.”

Our three-day “financial freedom” seminar at FreedomFest (July 8-11, Las Vegas) is gaining momentum, with the addition of Rick Rule, one of the wealthiest and most successful investment experts in the country, and certainly the nation’s foremost authority on energy and mining stocks. He is the president of Sprott US Holdings, based in California. Rick will speak several times at FreedomFest on various topics, including “How Insiders Can Maximize Their Gains in Natural Resources.” Rick is so excited to return to FreedomFest that he is bringing 100 of his best clients with him. He is one of our most popular speakers at FreedomFest, and we welcome him back.

We’ve also confirmed two highly successful money managers and private equity players: Donald Smith, a “deep” value investor who outperformed the market again last year; and Ziad Abedelnour, CEO of Blackhawk Partners, a private equity firm and major player in oil trading. Abedelnour and Yaron Brook, president of the Ayn Rand Institute and a veteran trader, are going to team up to do a special session on investing — a “Lebanese and Israeli Trade Best Investment Strategies.” Only at FreedomFest. Call 1-855-850-FREE.

Nailed It! Feds Get Rid of Unconstitutional “Seizures” of Property

Good news! Not everything in the Obama administration is bad.

Last week, U.S. Attorney General Eric Holder did something that even the Reagan and Bush administrations failed to do: stop using federal RICO statutes to justify seizing people’s property without due process of law or evidence of a crime.

“Civil forfeiture” laws allowed local police to take property, including cash and cars, from people that they stop. Indeed, handing property over to federal authorities became common during the country’s war on drugs in the 1980s.

Since then, the practice, commonly known as “civil forfeiture,” has allowed the police to seize cash or property that they suspect is tied to a crime — even if the owner isn’t charged with one.

Since 2008, thousands of local and state police agencies have made $3 billion worth of seizures of cash and property, the Washington Post reports.

In some cases, cops even introduced the seized cash and items into their own departments, which creates a bit of a questionable incentive. For hundreds of police departments, money or assets from these types of seizures made up 20% or more of their annual budgets, according to the Post.

Local police were seizing property even without charging anyone with a crime!

According to the Washington Post, 81% of that spending came from seizures in which the property or cash owners were never indicted.

Believe it or not, the Supreme Court has upheld the practice a number of times, even though it is a clear violation of the Fourth Amendment. It just goes to show how far the government will go when it comes to collecting money.

Unfortunately, there are still state laws on the books that allow property seizures. But at least the federal government is setting the right policy.

In case you missed it, I encourage you to read my e-letter column from last week about gross output and the real movers of the economy. I also invite you to comment in the space provided below.

Join me for the World MoneyShow in Orlando, Florida, Feb. 5-7 at the Gaylord Palm Resort & Convention Center. To register for free admission to the investment conference, click here or call 1-800-970-4355 and mention you are my subscriber. Use priority code 037575.

previous article
Tomorrow’s European Central Bank Meeting Could Have a Major Effect on the Markets; Plus, Watch My New Options Trading Video
next article
How Europe’s Easy Money will Affect the World