Over the past two weeks, the S&P 500 Index has broken below its short-term, 50-day moving average on two separate occasions. The big rally on Tuesday lifted the index back above the 50-day moving average, yet there is no denying that sellers have demonstrated a willingness to come back into this market. The chart below of the S&P 500 Index clearly shows the selling that has taken place thus far in April. 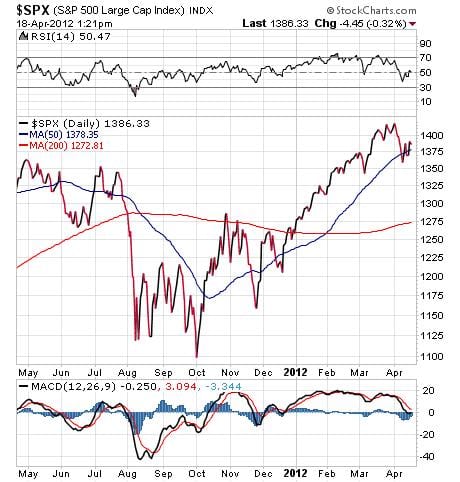 Despite the April sell-off, stocks in the United States have done very well when compared to most international equity markets. Since March, we’ve seen a distinct divergence in the market between domestic equities and equities in countries such as Japan, China, Australia and Brazil. Moreover, stocks in Europe have really come under pressure of late, as fears over regional debt problems still are plaguing Old World markets.

The chart below of the iShares MSCI EAFE Index Fund (EFA), generally regarded as a barometer of international equity performance, shows the downtrend that’s occurred since mid-March. 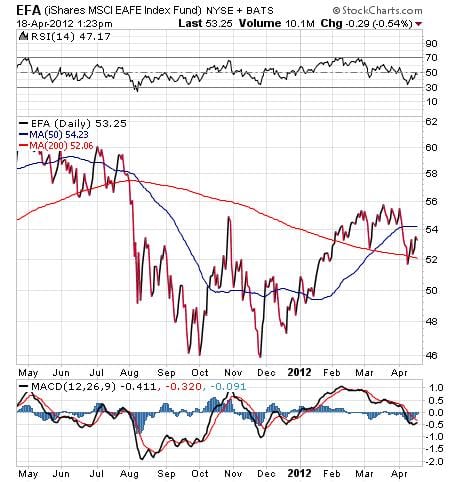 Because we are in a global economy, what’s happened of late is that stocks around the world have generally moved in lockstep. If stocks are higher abroad, then stocks in the United States have been higher, too. However, the latest bout of divergence between domestic and international equities is something to take note of here, especially after the big first quarter surge in U.S. markets.

If global equities continue to struggle, then U.S. equities may follow. In fact, I’m expecting U.S. stocks to be much weaker in the months to come. Even if we see earnings come in healthy, it may not be enough to overcome the traditional “sell in May and go away” mantra that many traders practice.

I am watching domestic markets closely here, as I think another retest of that 50-day moving average will be hard to conquer. The next step below is at the 200-day moving average, which on the S&P 500 is about 115 points lower, or roughly 8% below where it currently trades.

If we do see the United States go the way of global markets, then we’d all be advised to look out below.

The Bond Bull isn’t Over

There has been a lot of banter in the financial press about the folly of owning bonds right now. The theory is that if we are experiencing a strong recovery in the U.S. economy, then interest rates will begin to rise after a decade of low levels.

Unfortunately, the opposite is occurring. Interest rates remain at rock-bottom levels, and save for a mid-March pullback, intermediate-term bond prices are doing well. Take a look at the chart below of the iShares Barclays 7-10 Year Treasury Fund (IEF). 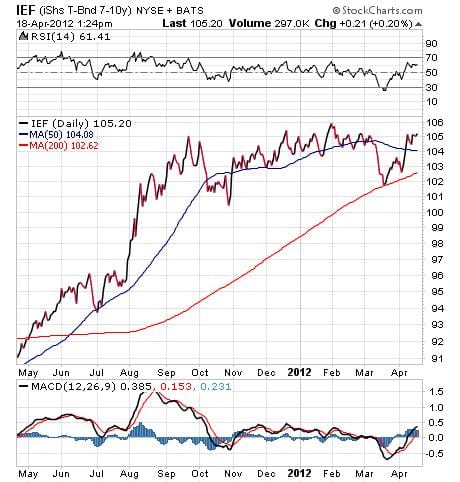 After falling to its 200-day moving average midway through the prior month, bond prices bounced back strongly to soar above their 50-day moving average. The buying in safe-haven investments like Treasury bonds is in large part due to those renewed fears about European debt issues.

The bottom line here is that the bull market in bonds remains intact. Although conditions will change someday, we aren’t there yet — and that means there’s nothing wrong with holding bonds, especially in an income-oriented portfolio.

If you’d like to find out how I’m advising investors so they can capture income and preserve their capital, then check out my High Monthly Income advisory service today.

“You can’t build a reputation on what you’re going to do.”

The business genius responsible for creating the automotive industry in the United States knew that it’s not enough to claim you are going to do something. To have a real reputation, you have to actually create, perform and deliver. Remember this the next time you hear a claim from someone about what they plan to do for you.

Wisdom about money, investing and life can be found anywhere. If you have a good quote you’d like me to share with your fellow Alert readers, send it to me, along with any comments, questions and suggestions you have about my audio podcast, newsletters, seminars or anything else.

previous article
A Strong Bounce in the Markets

You may not have have guessed it looking at the headlines, but global stock markets booked a terrific week. The S&P 500 Index ended the week 2.37% higher and the MSCI Emerging Markets Index jumped 2.74%. Markets continue to climb a wall of worry.

The big news this morning is Warren Buffett's illness, which does not appear to be life threatening. This may have a short-term impact on your holding in Berkshire Hathaway (BRK-B). I re