Summer Swoon to be Followed by Romney Rally

Nicholas Vardy has a unique background that has proven his knack for making money in different markets around the world.
share on:FacebookTwitter Google +
Global stock markets continued their summer swoon as the Dow Jones dropped 3.60%, and the S&P 500 lost 3.52% this week. The MSCI Emerging Markets Index (MCSI) fell slightly less, ending the week down 3.27%. That said, most markets have rallied during the last two trading days, and we may have seen a short-term low.
The overall negative market sentiment was reflected in the performance of your Alpha Investor Letter portfolio. Several of your positions, including Visa Inc. (V), Yum! Brands (YUM) and Stratasys Inc. (SSYS) dropped below their 50-day moving averages and moved to a HOLD. You were stopped out of your positions in the iShares MSCI Hong Kong Index (EWH) and the iShares MSCI Singapore Index (EWS). I am putting both of these positions back on the “watch list.”
With over 50% of its profits coming from China, Yum! was hit particularly hard by news of an economic slowdown in China. That said, the fundamentals of Yum! are still as strong as ever, and this week the company announced a renewed focus on India.
One trend in your Alpha Investor Letter portfolio is clear. Your U.S.-based positions have held up the best in an otherwise difficult market. In particular, Berkshire Hathaway (BRK-B) and The TJX Companies (TJX) continued to show terrific relative strength. TJX is still trading above its 50-day moving average, and remains the only BUY recommendation in your current Alpha Investor Letter portfolio.
Global markets are as oversold as they have been since the dog days of last August. At the same time, we are entering into the weakest time of the year. So although I don’t see a strong summer rally ahead, as I wrote in yesterday’s edition of the The Global Guru, my recommendation is to “keep calm and carry on.”
I expect a real change in market sentiment in the fall, as the increasing odds of a Romney presidency translate into a powerful “Romney rally.” The Obama presidency is fading fast. The result of yesterday’s Wisconsin recall elections was a referendum on Obama’s pro-union, tax-and-spend political vision — and it lost by a wider-than-expected margin. Both President Bill Clinton and Newark, N.J., Mayor Cory Booker have recently expressed frustration at Obama’s anti-business stance. Even Warren Buffett — a supporter of Obama — emphasized in a speech yesterday he is "not a card-carrying Democrat," mentioning that he contributed to the campaign of a Republican running for Congress. All of the top hedge fund managers in London I know have shifted their support to Romney. We will be meeting with Romney here in London for a fundraiser in late July.
Finally, don’t forget to join me today for my FREE subscribers-only Alpha Investor Letter discussion at 2:00 p.m. Eastern Time (11:00 a.m. Pacific Time). I’ll be discussing your current portfolio in depth, as well as my views about why I think the U.S. stock market will be the best place to make money over the coming months. Click here now to enter your contact information to participate in today’s conference call with me.
Portfolio Update
MSCI Malaysia Index (EWM) dipped 1.51% last week. EWM has been building solid support at the $13.50 level for over two weeks now, despite negativity in the U.S. markets. EWM will likely hold this level as investor sentiment continues to sour. EWM is a HOLD.
iShares JPMorgan USD Emerging Markets Bond (EMB) remained flat for the week. EMB’s recent price history is reassuring in these uncertain times. After spending two weeks straddling the 200-day moving average, EMB took a dive last Friday. However, EMB completed an extremely strong rebound back to the 200-day moving average over the past two days. EMB is a HOLD.
Berkshire Hathaway (BRK-B) gave back 0.88% over the past five trading days. BRK-B weathered the recent storm well, maintaining its long-held $78 support level. Despite Mr. Market’s current negative mood swing, Warren Buffett said Tuesday that the odds of a recession returning were “very low.” BRK-B is a HOLD.
Visa Inc. (V) dropped 5.38% over the week. Barclays Capital reaffirmed its “Overweight” rating for Visa on Monday — adding to the “Buy” ratings recently issued by Goldman Sachs and the Jefferies Group. Trading below its 50-day moving average, V is a HOLD.
Yum! Brands, Inc. (YUM) fell 9.92%. YUM! shares took a one-two punch last Friday. Reports of a China slowdown, coupled with an analyst downgrade, rattled investors. With Yum!’s continued strong prospects, this is a news-driven over-reaction. YUM is a HOLD.
The TJX Companies (TJX) dipped just 1.18% over the previous week. TJX has been particularly resilient throughout the broader market correction, managing to hold the 50-day moving average on strength. Additionally, a Thursday Dow Jones report cited that underlying strength in the U.S. consumer was buoying retail consumption at a relatively strong pace. TJX is a BUY.
Stratasys, Inc. (SSYS) lost 8.32% last week. SSYS announced Tuesday early termination of the Stratasys/Ojbet Ltd. merger “waiting period” required by government regulators. It thus removed another hurdle in its planned merger. SSYS will complete the combination of the companies in Q3 of 2012, pending shareholder approval. Trading below its 50-day moving average, SSYS is a HOLD.

If you ever have the chance to walk down London's Oxford Street, as I and many tens of thousands of tourists did this week in celebration of Queen Elizabeth's "Diamond Jubilee" -- the 60th anniversary of her reign -- you'd likely come across a copy of this poster sold in every souvenir stand. 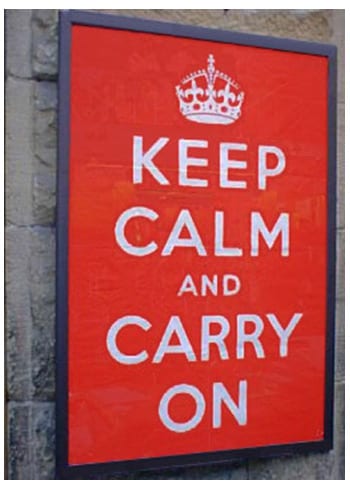