The latest Fed policy statement was like music to the ears of stock market participants. In sum, Fed Chair Janet Yellen told attendees at a packed post-Federal Open Market Committee (FOMC) meeting news conference that the Fed will move on interest rates when it simply is time to do so and that the U.S. central bank won’t be held to a timeline. That’s all the bulls needed to hear and money came off the sidelines like a tidal wave into equities and, particularly, dividend-paying assets that had been in a holding pattern in advance of the FOMC meeting. The news effectively gave income investors a fresh hall pass to go long in the market.

The 10-year T-note rallied sharply on the news, falling in yield from 2.25% to 1.95% in the span of two days. Yellen and the Fed, well aware of how the torrid rise in the dollar will crimp profits from most of the S&P 500 companies that conduct a large percentage of business overseas, also launched a stealth attack on the dollar by effectively leaving open the possibility of no future rate hikes until the rate of core inflation reaches 2.0% and the unemployment rate drops to 5.1%.

By their own figures, the Fed sees inflation running at 0.6-0.7% for 2015 and 1.6-1.7% for 2016. So, if the Fed intends on using 2.0% as a trigger to raise the Fed Funds rate, it might be 2017 before a rise in short-term rates materializes. Hence the 550-point rally from Thursday’s trough to Friday’s peak for the Dow. After almost three months of one-step forward, one-step back, the market has the look and feel of getting out of first gear and resuming its ascent.

Exclusive  Is There a Better Way To Beat the Market Than Market Timing? Yes!

With the fresh assurance that the Fed will stand pat until the whites of the eyes of inflation can be seen, dividend-paying and income-bearing assets are stacked up on the runway, ready for takeoff. The cautionary tone that has surrounded almost every sector of the high-yield space has been lifted with the foreknowledge investors now have that interest rates are down for the count for at least several months. My view is that most of the high-yield sectors are “spring-loaded” for a banner year.

Many times high-yield investors feel like they aren’t participating in much of the market’s appreciation for pure growth equities. Well, there is a way income investors can have their cake and eat it too. One highly attractive position held in the Cash Machine model portfolio is the Seligman Columbia Premium Technology Growth Fund (STK), a closed-end fund that that employs an actively managed buy/write covered-call strategy on a portfolio made up entirely of leading technology stocks. The fund has major positions in Apple, Lam Research, Skyworks Solutions, Broadcom and Checkpoint Software, just to name a few of the 58 separate holdings within the fund’s portfolio. As the Nasdaq is looking to not just take out the 5,000 level but trade meaningfully higher, I want Cash Machine subscribers to be participants in this tech rally.

Best of all, the call premium received in the STK fund affords management to comfortably pay out a 9.85% current yield, paid on a quarterly basis. The one-year chart shows a very constructive pattern that almost mirrors the ascending formation of the Nasdaq and yet is paying out almost five times what the 10-year T-note yields. 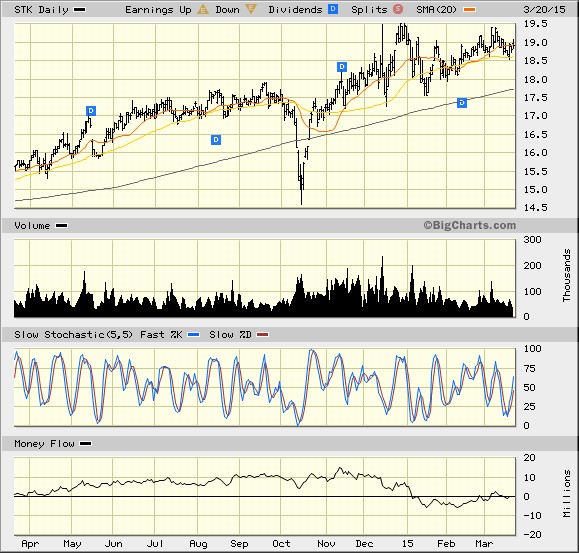 With the understanding that foreign fund flows are going to be pouring into U.S. markets under the influence of a strong currency, steady growth, tempered inflation and an accommodative Federal Reserve, income investors can up their “risk on” exposure to equity-income assets that include covered-call closed-end funds. One example is STK. It is a great fit that puts dividend-hungry investors in the way of the market where the lion’s share of the action is.

In case you missed it, I encourage you to read my e-letter column from last week speculating on the Fed’s interest rate decision. I also invite you to comment in the space provided below my commentary.

I invite you to join me at the MoneyShow Las Vegas, May 12-14, 2015. With stock picking taking on renewed importance as the market shows signs of volatility, this event offers an opportunity to hear from a number of experts, including my Eagle Financial Publications colleagues Mark Skousen, Doug Fabian and Chris Versace.

Be a guest of Eagle Financial Publications and register for FREE by using priority code 038657 and calling 800-970-4355 (toll free in the United States and Canada) or signing up online.