Are We Headed for Another 1937-Style Recession?

“Premature decline in government spending could cause a 1937-style recession.” — Christina Romer

Some economists worry that if the Fed raises rates too soon or the Republican-run Congress cuts government spending too much, we will have a 1937-style recession.

The 1937 recession was known as a “recession within the depression.” Just as the economy was recovering from the Great Depression in the 1930s, suddenly industrial production fell by 32%, unemployment rose to 20% and the stock market fell in half.

Could it happen again? What caused the 1937 recession?

Others say it was monetary policy. The Fed doubled the bank reserve requirement and the Treasury “sterilized” the incoming gold reserves. Back then gold represented 85% of the monetary base. The Treasury decided to keep the gold in an isolated account instead of turning it over to the Federal Reserve. As a result, the money supply (M2) stopped growing in early 1937. It had been growing at 12% a year from 1934 to 1936. See the following chart. 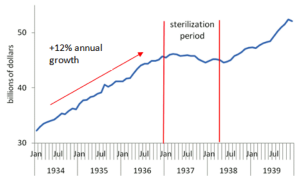 What about today? Ah, there’s the difference. The money supply (M2) continues to grow and, in fact, has been growing faster lately at around 10-11%. If that trend continues, I don’t see another recession any time soon, and we may see some price inflation heading our way.

Nailed It! Forbes Leaves Fortune and Wall Street (Journal) Behind

What amazed me about the latest “Billionaire” issue of Forbes magazine was not the stories about the billionaires, but about Forbes itself.

See the amazing graph below. For years we’ve been told the print media is dead, that digital media (like Forbes.com, wsj.com, etc.) was the wave of the future. 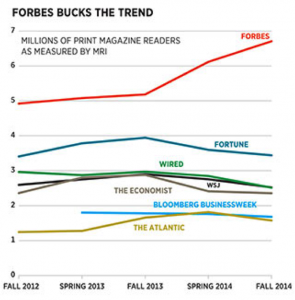 As the graph shows, Forbes magazine is not only surviving, but thriving, and now has 7 million readers.

Yet Forbes is an outlier. The rest of the print media is going down, slowly but surely. In the past two years, circulation for Fortune, the Economist and even the mighty Wall Street Journal is in decline.

What is Forbes doing right? Perhaps it is the popularity of its Forbes 400 Richest People in America list, the billionaires list, the top 100 celebrity list, etc., which makes Forbes more like People magazine in enticing the attention of its readers.

I’m planning to ask Steve Forbes about the secret to his success when we meet at FreedomFest. Speaking of that Las Vegas conference, be sure to get the April 13 issue of Forbes, which contains a full-page color ad for the big show. This is the one conference where Steve Forbes attends the entire show (three full days). See why at www.freedomfest.com, and come join us.

I want to invite you on a cruise, Sept. 13-20, with Newt Gingrich, Chris Versace and me, among others. I will be doing a special one-on-one interview with Newt Gingrich on the cruise. Come spend seven fabulous days aboard the six-star luxury liner, the Crystal Symphony. We will travel from New York to Montreal with a roster of noted historical scholars, political pundits and renowned market experts who will share their insights and perspectives on the current environment in Washington and Wall Street. For further information, including how to sign up, call 800-435-4534 or visit www.PoliticsAndYourPortfolio.com. Not to be missed!

In case you missed it, I encourage you to read my e-letter column from last week about why healthcare investing will increase in importance. I also invite you to comment in the space provided below.

Las Vegas Money Show, May 12-14, Caesars Palace: I will be the keynote speaker at this year’s Vegas Money Show! I will be addressing the question, “Is the Golden Age of Investing Over? Not for this Market-Beating Strategy!” Others speakers include Andy Busch, Marilyn Cohen, Roger Conrad, Bob Carlson, David T. Phillips, Jeff Hirsch, Mark Hulbert, Louis Navellier, Jim Stack and Wayne Allyn Root, as well as my Eagle Financial Publications colleagues Doug Fabian, Chris Versace and Bryan Perry. To register for a complimentary ticket, use priority code 038654 and call 800-970-4355 (toll free in the United States and Canada) or sign up at http://www.Skousen.LasVegasMoneyShow.com. 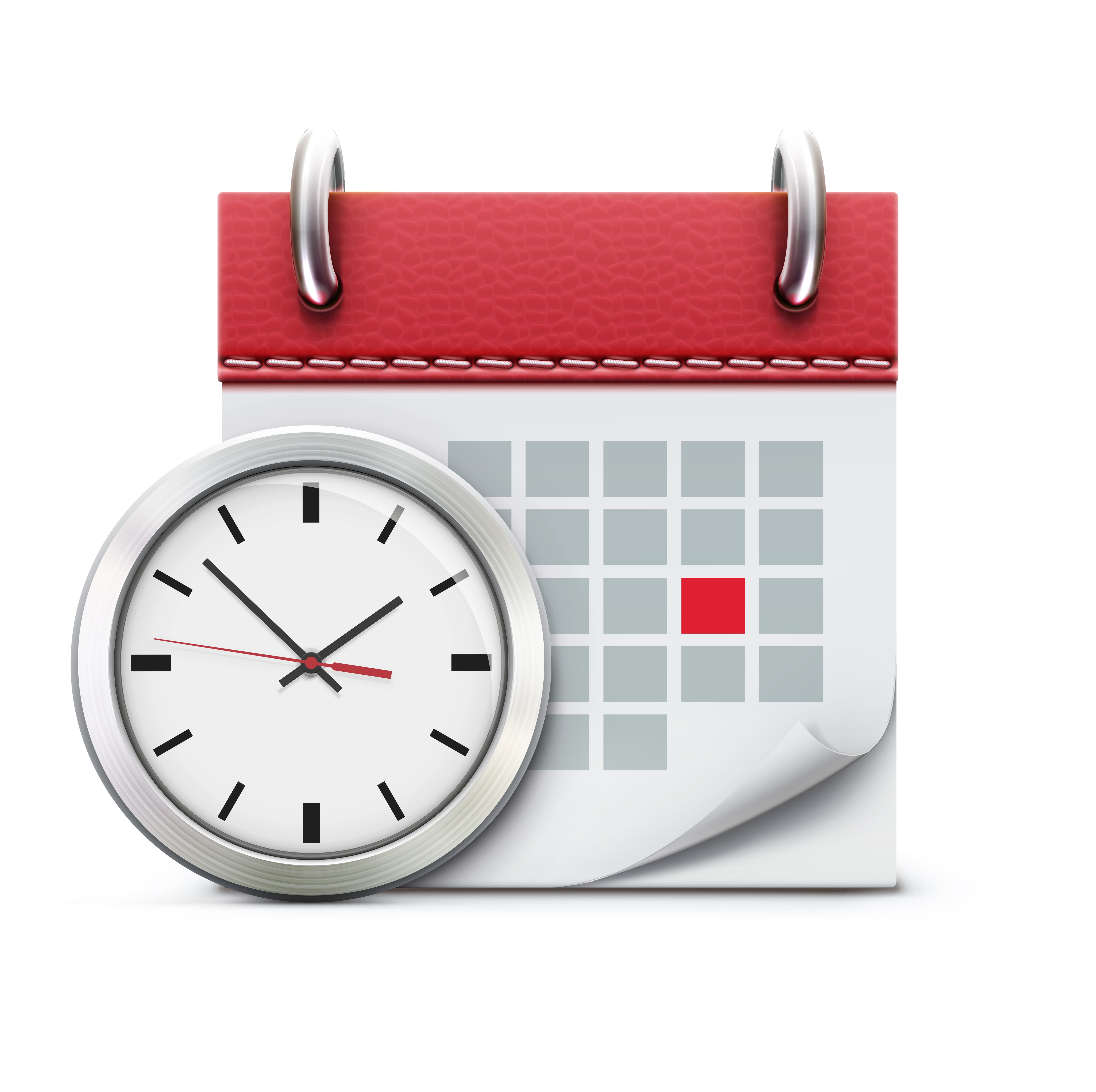 It may sound pretty simple, but many people tend to overlook the calendar as a source of catalysts that can propel a stock or call option higher.