At the recent Las Vegas MoneyShow, I gave a talk on “Money & Politics: A Washington Insider Reveals the Surprising Secrets of Capitol Hill.” I had people standing in the room to hear my presentation with all the seats filled. If you missed it, I will be repeating the talk at this year’s big FreedomFest show.

But the biggest surprise is that the stock market does better, way better, starting with President Bill Clinton, when Democrats hold the White House rather than when Republicans are in office. See the graph below. 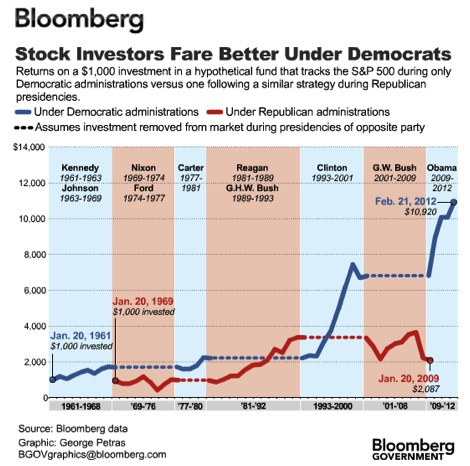 As you can see from the chart, stocks rallied somewhat during the Kennedy-Johnson and Carter administrations but rose strongly during the Clinton and Obama presidencies — a perfect record.  Stocks slumped during the Nixon and George W. Bush administrations. The exception is the 12 years of Republican rule under Reagan and G. H. W. Bush, when stocks did quite well. But overall, at least in recent decades, the Democrats win.

You would think that Wall Street would favor Republican administrations, given their emphasis on tax cuts, limited government and deregulation. It worked for Reagan. But unfortunately, the Nixon and George W. Bush administrations actually increased the size and scope of government. Yet Obama also increased big government — so clearly, the connection between government policy and stock market performance is mixed.

You Blew It! Can You Really be Anything if You Put Your Mind to it?

“You can be anything you want to be.” — Gaurdia Banister, Commencement Speaker, University of Texas at Austin, May 22, 2015

Over the weekend, I attended my son-in-law’s graduation at the University of Texas at Austin. The commencement speaker was Gaurdia Banister, the director of the Institute of Patient Care at Massachusetts General Hospital.

At one point in the program, she tried to energize the graduates by declaring, “You can be anything you want to be.”

Motivational speakers often engage in this kind of hyperbole to encourage students to go on and achieve some great success in life.

My father did the same. To motivate us to accomplish something in life, he often said, “You can be anything you want to be,” but added the caveat, “you have to pay the price.”

Today’s world is full of self-help guides and ways to increase self-esteem. But we could all use a little more realism in our efforts.

Let’s be honest. You can accomplish a great deal in life, often beyond your expectations. But you can’t be “anything” in life. I’d love to be a professional basketball player, but it’s never going to happen. I just don’t have the height or the skills.

Too often business leaders tell young people to “follow their dreams.” But dreams can turn into nightmares if you ignore the realities of your level of knowledge and abilities. You are going to fail as often as you succeed. As Harry Callahan said in one of Clint Eastwood’s “Dirty Harry” films, “A man’s got to know his limitations.”

In case you missed it, I encourage you to read my e-letter column from last week on Eagle Daily Investor about the recent minimum wage vote in Los Angeles. I also invite you to comment in the space provided below my commentary.

Breaking News: I just confirmed with Glenn Beck that he wants me to display my 1st edition of Adam Smith’s “The Wealth of Nations” in his special event at FreedomFest, July 8-11, in Las Vegas. I will have it there to show my subscribers, so please join me for a special presentation on Wednesday, July 8, and Glenn Beck’s display of world-famous artifacts of history. Sign up here for FreedomFest or call toll-free 1-855-850-3733. Our hotel block is almost full, so now is the time to join us for “the greatest libertarian show on earth.” It will change your life!

We will have a full three-day investment conference there, too, with top advisors from around the world coming, including Bert Dohmen, who called the exact bottom of the bear market in March 9, 2009… what is he predicting now? Also scheduled to speak is Donald Smith, a “deep value” money manager who has outperformed Warren Buffett. His minimum investment is $50 million, but you will get his latest stock picks. Only at FreedomFest!

Why an IPO’s Business Makes All the Difference

Some IPOs can be fantastic performers, while every now and again we get one that flops out of the gate.