The 2012 bull market run has been to a large extent fueled by the big gains in tech-giant Apple (AAPL). The company’s shares rose some 45% during the first quarter, and that stellar performance led the charge higher for the major indices. Now, in contrast to that scintillating first quarter performance has been the retreat of Apple shares over the past two weeks. Through Tuesday’s close, the stock is down about 12% since hitting its April 9 high.

After the closing bell last night, Apple reported what only can be described as blockbuster earnings. The company’s profits almost doubled last quarter on incredibly robust demand for its marquee products such as the iPhone, the iPad and the Macintosh computer. Apple said that net income in the fiscal second quarter climbed 94% to $11.6 billion, or $12.30 a share, as sales rose 59% to $39.2 billion. The numbers blew away expectations for a profit of $10.02 a share on revenue of $36.9 billion.

The extraordinary numbers caused buyers to come running back to Apple shares, and that drove the stock up 8.5% midway through the trading session. 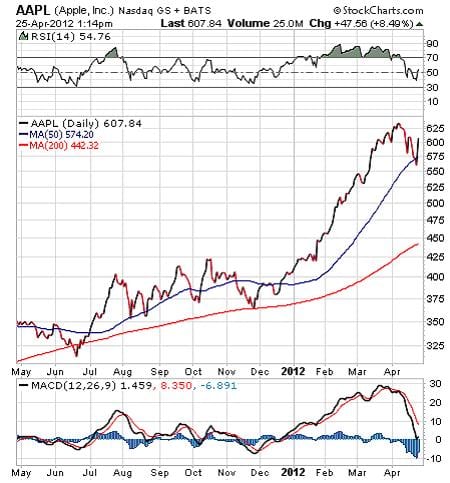 The S&P 500 Index and NASDAQ Composite are reaping the benefits from the Apple boost, as both traded up nicely today. The chart here of the S&P 500 Index shows that the broad measure of the domestic market now has climbed back above its 50-day moving average. 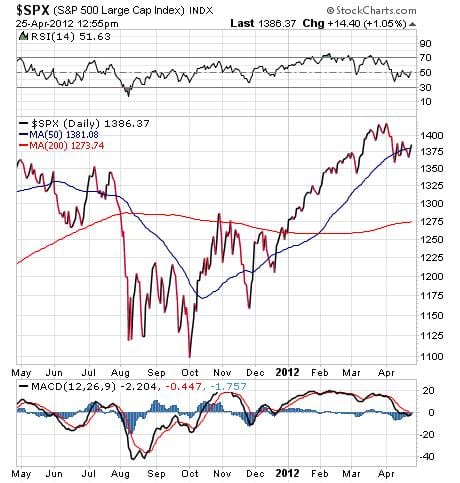 Certainly, the Apple numbers are understandably fueling today’s buying, but does this mean that we are out of the woods when it comes to threats on this market? Not hardly.

Today we received news that orders for U.S. durable goods fell in March by the most in three years, depressed by a pullback in demand for aircraft. Bookings for goods meant to last at least three years dropped 4.2%, much more than economists were expecting. The metric also represents the biggest decrease since January 2009. This news is not encouraging, and more negative metrics like these could begin to weigh down the economy and the markets.

Now, in what seems like a minor event in today’s news cycle, we got word from the Federal Reserve and its decision on interest rates. As expected, the central bank left rates unchanged, but the Fed’s statement was telling when it comes to inflation.
Central bank officials noted the pick up in inflation that was largely attributable to energy cost hikes, but they said that this would affect overall price growth only temporarily. Of course, the Fed didn’t admit that its low-interest rate policies have had anything to do with the sagging value of the dollar and its connection to the rising cost of crude oil, but that’s another subject entirely.
The Fed has made it clear that it stands ready to jump in if the economy falters, and that’s largely what many bulls have been counting on. If we see more soft economic numbers, such as the durable goods data that we received this morning, the Fed, indeed, may make a move. If that happens, look for more pressure on the U.S. dollar, even higher oil prices, and a shine in gold prices.

The United Kingdom Returns to Recession

Today, we received news that a double-dip recession in theUnited Kingdom now is official. The U.K. economy shrank in the first quarter, as gross domestic product (GDP) fell 0.2% from the fourth quarter of 2011, when it declined 0.3%, according to the Office for National Statistics. The decline came as a surprise, as most analysts were expecting an increase in U.K. GDP of 0.1%.

As you likely know, a recession is defined as two straight quarters of economic contraction. Well, that’s precisely what we’ve seen in the United Kingdom, and that doesn’t augur well for the European Union,China– or theUnited States.

Adding to the region’s fiscal worries were Sunday’s results of the first round of elections inFrance. Here we saw current France’s President Nicolas Sarkozy finishing in second place to Socialist challenger Francois Hollande. Sarkozy and Hollande will face off in the second round of voting, but the worry is that Hollande is way ahead in the polls and is expected to win rather easily.

The problem here for investors is that Hollande plans to rework the financial terms of a recent European Central Bank (ECB) treaty, including raising the minimum wage and imposing much higher taxes on the rich. A rollback of the Sarkozy policies could throw the entire European bailout plan into jeopardy. If this  situation happens, we could be staring down the barrel of a very pernicious global equity sell-off.

Another negative factor weighing onEuropeis the latest decline in manufacturing. Euro-area services and manufacturing output declined for a third month in April, as the euro-area composite index based on a survey of purchasing managers in both industries fell to 47.4, a five-month low, down from 49.1 in March, according to London-based Markit Economics. A reading below 50 indicates contraction, and that makes this number yet another depressed metric coming out of the region.

I think a European-induced, global economy flu is going hit us this year, and that concern is one of the reasons why I’ve been so cautious in terms of allocating capital to equities in my Successful Investing advisory service. When Europe’s façade crumbles, it’s going to pull down the rest of the world’s equity markets — and I don’t want to be standing idly by when it does.

On What You Don’t Become

“It’s not what you are, but what you don’t become that hurts.”

The multi-talented pianist, composer, author, comedian and actor achieved a lot during his life, but here he opines that it’s what we achieve, but what we don’t achieve that gives us the greatest pain. When it comes to your money, I don’t want you to lament over failing to achieve prosperity. Making money isn’t the only thing in life, but let’s not kid ourselves, it’s definitely up there in the pecking order of importance. If you don’t want to feel hurt about failing to make money, then make sure you read the Alert each and every week.

previous article
Global Stock Markets Pull Back, Due For A Bounce
Markets across the globe pulled back over the past week, with the S&P 500 ending the week 1.35% lower and the MSCI Emerging Markets Index down 1.93%. But global stock markets are rallying this morning, buoyed by positive sentiment stemming from Apple's (AAPL) better-than-expected earnings.
As we wrap up the month of April, it's clear that the U.S. market's strong Q1 rise has abated over the past two months. Yesterday, the S&P 500 closed around the same l

Exclusive  No Need To ‘Sell in May’ This Year, But Feel Free to Step Away