What King Dollar Means to Investors

On September 14, 2011, I received a little book in the mail called “The End of America,” in which the author predicted chaos in America within 12 months.

“I want to detail for you a specific event that will take place in America’s very near future… which could actually bring our country and our way of life to a grinding halt,” the author wrote.

I’ve been told that promotion was part of the most successful newsletter marketing campaign in the past 10 years.

That event was the collapse of the dollar.

I was skeptical of this prediction, as with all others made by doomsayers. As the old saying goes on Wall Street, “bears make headlines, bulls make money.”

It turns out that the publication date of “The End of America” was close to the bottom in the U.S. dollar. It has been King Dollar ever since! (See the following chart.) 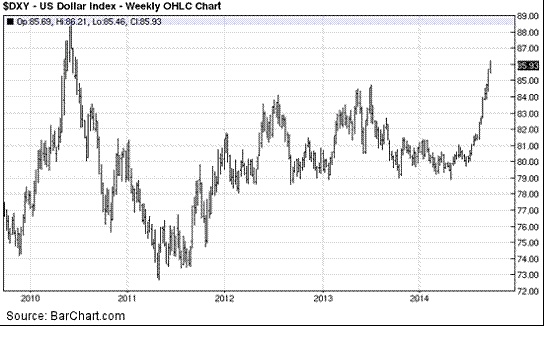 Why has the dollar rallied? Certainly, our national debt has only gotten bigger, and our economic growth rate has slowed.

One reason is that the Europeans, the Japanese and the Chinese are cutting interest rates, while American central bankers are threatening to raise rates. Moreover, while we still have serious economic problems in America, Europeans and some Asian countries are facing more serious challenges.

On net balance, the U.S. economy has benefited from King Dollar. Granted, exports are now more expensive, which has hurt U.S. manufacturing, but the benefits outweigh the costs:

You Blew It! Should ESPN Give Bruce Jenner an Award for Courage?

ESPN has decided to give its acclaimed Arthur Ashe Courage Award to Bruce Jenner for “coming out” as a “woman” and changing his name to “Caitlyn Jenner.”

The Ashe Award, which Jenner will be receiving alongside his family at the ESPY award show in July, is one of the most prestigious in sports. According to ESPN, “the recipients reflect the spirit of Arthur Ashe, possessing strength in the face of adversity, courage in the face of peril and the willingness to stand up for their beliefs no matter what the cost.”

I’ll tell you what courage is. It is the courage to not have a sex change operation (which can never be fully done anyway), especially since past instances have shown the procedure often has not brought long-term happiness to the recipients. A Swedish study, which focused on people who underwent such surgery between 1973 and 2003, found that they endured considerably higher risks for mortality, suicidal behavior and psychiatric morbidity than the general population. In that light, I think courage would be Bruce Jenner fighting his fantasies of “being a woman trapped in a man’s body” just as he sacrificed and worked hard to win the gold medal for the men’s decathlon in 1976. It is recognizing that he’s never going to really be female, and he might as well admit it. He can never have children, be pregnant or fully sense those physical traits of a woman. The fact that he went through a major operation to look like a woman, but would not remove his genitals, says it all.

In addition, Johns Hopkins University, the first American medical center to venture into “sex-reassignment surgery” in the 1960s, began a study in the 1970s to compare the outcomes of transgendered people who had the surgery to those who considered it but did not. Although most of the surgically treated patients described themselves as “satisfied” by the results, their subsequent psycho-social adjustments were no better than the control group, so Johns Hopkins stopped doing such surgery.

Bull and Bear Debate at FreedomFest

I see that former Congressman Ron Paul is getting a lot of publicity these days making a similar doomsday warning about America. (His campaign is being promoted by the same group that put out “The End of America” in 2011.) His prediction is scaring seniors.

Where are we headed next? Will the dollar and bonds continue to rally? Has the stock market topped out? Is the golden age of investing over? We will debate these topics at this year’s big show in Vegas. We have a full three-day investment conference at FreedomFest. One of the highlights will be the Bull and Bear Debate. The two bears are Bert Dohmen (who predicted the 2008 crisis at FreedomFest and who anticipated the bottom in the market in March 2009 — what is he predicting now?) and Peter Schiff (EuroPacific Capital), who predicted the 2009 crisis. The two bulls are Alex Green, editor of the Oxford Club, who has a great track record, and value investment manager Dennis Slothower (Alpine Capital). Only at FreedomFest!

Good news! The FreedomFest schedule is now online! Go to http://freedomfest.com/conference-schedule/. You will be amazed at the variety and number of speakers, panels and debates at this year’s big show — more than 250 in total! If you haven’t been to FreedomFest, you are in for a treat. Sign up today at www.freedomfest.com, or call toll-free 1-855-850-FREE. Everyone who is anyone is coming! FreedomFest is not to be missed!

We have more than 1,500 people now coming… and our hotel room block at Planet Hollywood is almost full. I urge you to sign up now! Go to http://freedomfest.com/hotel/.

In case you missed it, I encourage you to read my e-letter column from last week on Eagle Daily Investor about Wall Street’s different reactions to Democratic and Republican presidents. I also invite you to comment in the space provided below my commentary.

Breaking News: I just confirmed with Glenn Beck that he wants me to display my 1st edition of Adam Smith’s “The Wealth of Nations” in his special event at FreedomFest, July 8-11, in Las Vegas. I will have it there to show my subscribers, so please join me for a special presentation on Wednesday, July 8, and Glenn Beck’s display of world-famous artifacts of history. Sign up here for FreedomFest or call toll-free 1-855-850-3733. Our hotel block is almost full, so now is the time to join us for “the greatest libertarian show on earth.” It will change your life!

We will have a full three-day investment conference there, too, with top advisors from around the world coming, including Bert Dohmen, who called the exact bottom of the bear market in March 9, 2009… what is he predicting now? Also scheduled to speak is Donald Smith, a “deep value” money manager who has outperformed Warren Buffett. His minimum investment is $50 million, but you will get his latest stock picks. Only at FreedomFest!