Why the Global Economy Isn’t Ready for the Next Recession

For all of you dividend fans out there, I am thrilled to announce that we have added www.DividendInvestor.com to the Eagle family of products. With screening tools, an all-star ranking of dividend stocks, the best dividend calendar on the web, personalized alerts and more, this site is a great complement to our investment products. Check it out today… go to www.DividendInvestor.com now!

“Watch out! The world is not ready for the next recession. Europe is in deep debt… Japan faces deflation… The economies of both Brazil and Russia are expected to shrink this year… The danger is that governments and central banks will not have the ammunition to fight the next recession.”

Today, the U.S. government’s Bureau of Economic Analysis (BEA) released its latest Gross Output (GO) statistic, a broader measure of U.S. economic activity that I have been advocating for years, and it confirms little or no economic growth in the economy in 2015. According to today’s BEA release, real GO advanced at an annualized rate of only 0.7% to $31.0 trillion by the first quarter of 2015, compared to 5.2% in the third quarter and 2.6% in the fourth quarter of 2014. The downward trend in the economy continues. In nominal terms, GO actually fell 1.1%, but price deflation was so strong that GO increased in real terms.

Gross Output is a measure of sales or receipts of all industries throughout the production process, including business-to-business transactions (B2B). Most B2B activity is left out of gross domestic product (GDP) statistics.

Since the financial crisis of 2008-09, GO has risen faster than GDP, and that continued to be the case in the first quarter of 2015. Real GO rose slightly compared to a small loss in real GDP in the first quarter. GDP, which measures the value of final goods and services only, fell 0.2% in real terms to $17.7 trillion in the fourth quarter. The fact that GO is still growing faster than GDP suggests that the economic recovery is still in place, but only marginally.

B2B activity actually declined significantly in the first quarter. According to the new Skousen B2B Index, business spending fell 2.8% to $22.7 billion in nominal terms compared to the fourth quarter. (No B2B price deflator is available at this time, but real B2B is likely to be down slightly for the first quarter.) However, consumer spending remained flat. See the chart below. 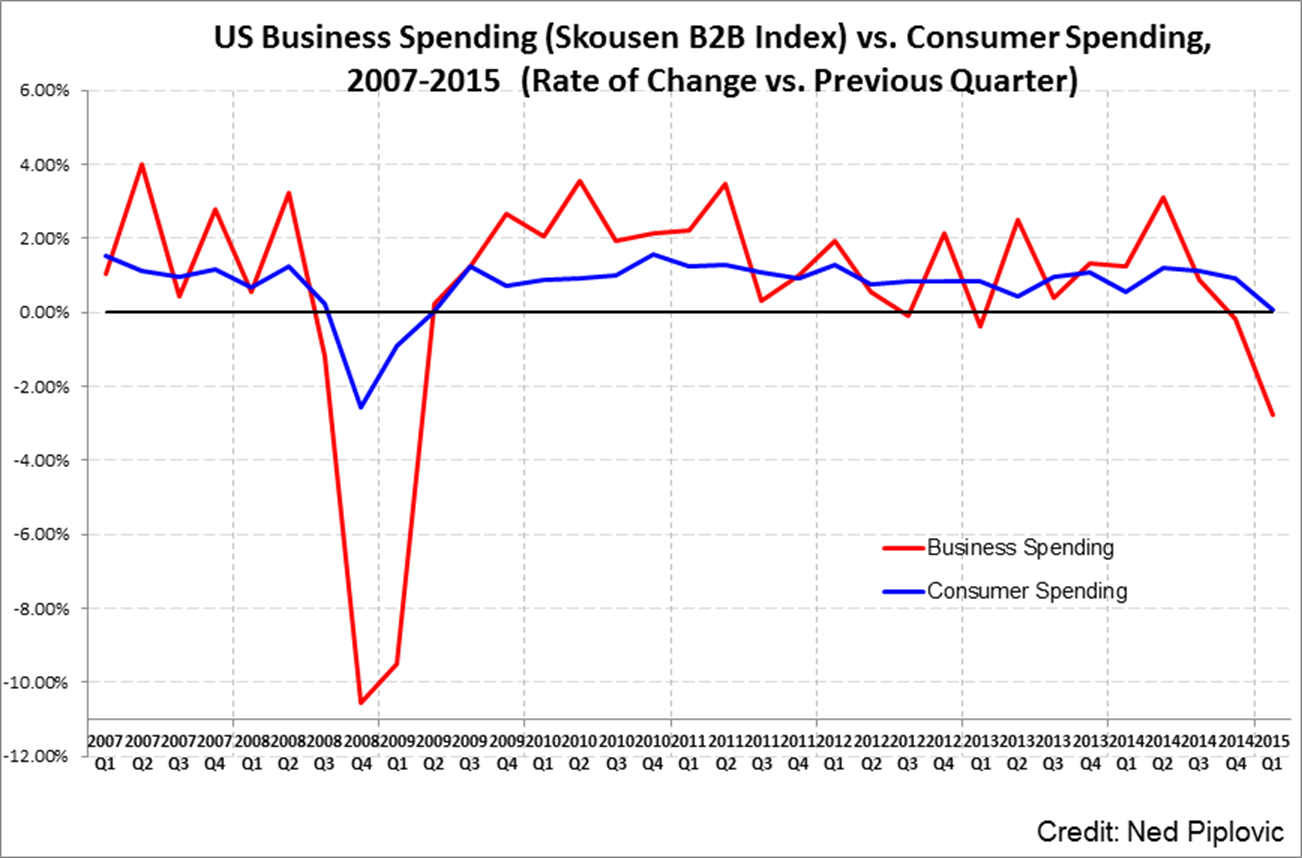 The GO data and my own B2B Index demonstrate that total U.S. economic activity has slowed significantly and become dangerously close to going into another recession. B2B spending is, in fact, a pretty good indicator of where the economy is headed, since it measures spending in the entire supply chain, and it indicates continued weakness.

I champion Gross Output as a more comprehensive measure of economic activity. GDP leaves out a big part of the economy, such as business-to-business transactions in the production of intermediate inputs. GO includes most of the B2B activity that is vital to the production process.

I first introduced Gross Output as a macroeconomic tool in my work “The Structure of Production” (New York University Press, 1990, new third edition forthcoming in August, 2015). Now the BEA publishes GO on a quarterly basis in its “GDP by Industry” data, the first aggregate statistic to be published on a quarterly basis since GDP was introduced in the 1940s. I consider it the biggest triumph in supply-side “Austrian” economics since Friedrich Hayek won the Nobel Prize in 1974.

According to my B2B Index, total business spending throughout the production process fell slightly to $22.7 trillion in the first quarter of 2015, compared to personal consumption expenditures of $12.1 trillion (no change from the previous quarter). Thus, we see that business spending is almost twice the size of consumer spending in the U.S. economy. 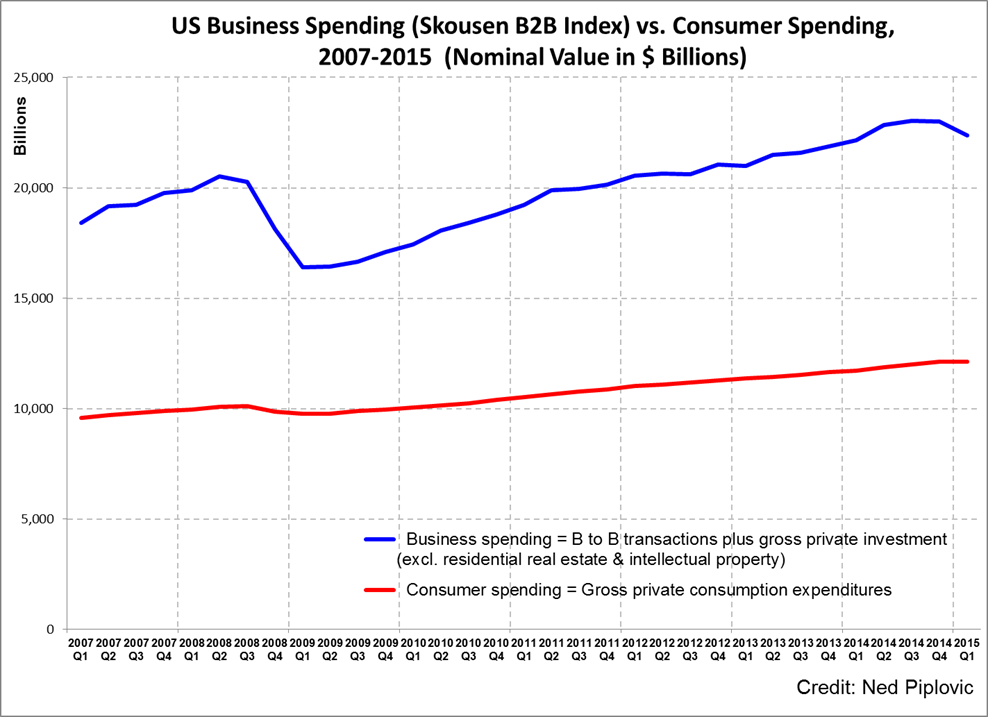 For more information on Gross Output, the Skousen B2B Index and their relationship to GDP, see the following:

Steve Forbes, Forbes Magazine (April 14, 2014): “New, Revolutionary Way To Measure The Economy Is Coming — Believe Me, This Is A Big Deal”

Mark Skousen, Forbes Magazine (December 16, 2013): “Beyond GDP: Get Ready For A New Way To Measure The Economy”

You Blew It! Why Are Commercially Grown Fruit and Vegetables So Tasteless?

In my economics classes, I make the case that over time the marketplace increases the quantity, quality and variety of goods and services. I ask students to choose their favorite product or service (such as smartphones or sports equipment) and see if they have not seen a vast improvement over the years.

Are there any exceptions?

Yes, the quality of most commercially grown fruits and vegetables has declined in my lifetime. I remember the exquisite taste of ripe tomatoes (when they had skins so thin that they would almost fall off), carrots, apricots and peaches.

Now it’s hit or miss when it comes to flavor. Everything is about appearance. But appearance can be deceptive. On many occasions, I buy a box of beautifully red strawberries at the local grocery store, only to get home and find them tasteless.

Fruit companies have done a good job with apples, and we have an increasing variety of good-tasting apples throughout the year. I especially like the tartness of Pink Ladies and juiciness of the Honeycrisp.

Two days ago, I bought six peaches that were colorful but hard as a rock. I was told to let them sit for two days before making them into a peach cobbler. Sure enough, in two days I could peel them and bake them into a cobbler. I was looking forward to a nice dessert. But no. The peach cobbler was bland and had to be thrown out.

It’s hit and miss when it comes to carrots. I love to eat a raw carrot for a snack, but it’s impossible to tell whether I will get a tasty one or a tasteless one.

A recent government study indicated that only 13% of Americans eat enough fruits and vegetables, a key way to help lower the risk of chronic illnesses such as obesity and heart disease. Now we know why. Most commercially grown fruit and vegetables are bland and tasteless.

I want to invite you on a cruise with Newt Gingrich and me, among others, Sept. 13-20. Spend seven fabulous days aboard the six-star luxury liner, the Crystal Symphony. We will travel from New York to Montreal with noted historical scholars, political pundits and renowned market experts who will share their insights and perspectives on the current environment in Washington and Wall Street. For further information, including how to sign up, visit www.PoliticsAndYourPortfolio.com.

In case you missed it, I encourage you to read my e-letter column from last week on Eagle Daily Investor about who won the Krugman-Moore debate. I also invite you to comment in the space provided below my commentary. 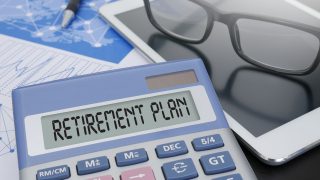