Gold and Oil Plunge: How Long Can King Dollar Last?

This year’s FreedomFest attracted a large number of financial gurus who use the Austrian economics of Ludwig von Mises and Friedrich Hayek to make investment decisions.

Every year we have the “bulls vs. bears” debate on the future of the stock market. Since 2009, despite the worries raised by the bears, the bulls have won the day in the marketplace, with stocks heading higher and higher. This year, the bearish position was led by Bert Dohmen, president and founder of Dohmen Capital Research, and Peter Schiff, CEO and Chief Global Strategist of Euro Pacific Capital. Both had predicted the 2008 financial crisis and have large followings.

Both use the Austrian theory of the business cycle, suggesting that the Federal Reserve’s low interest rates and easy-money policies in the past six years have created an artificial stimulus that must eventually cause another collapse.

Dohmen noted that “bull markets tend to last an average seven years,” so he says “we’re near a top” now. When asked what events could change his mind from bear to bull, Dohmen said bluntly, “Nothing would turn me bullish.”

The super-bear Peter Schiff said he was more concerned about a dollar crash than a market crash. He predicted a new round of Fed-led quantitative easing (QE4) when the market collapses.

Alex Green, the chief investment strategist for the Oxford Club, was more even-handed, saying that he is “not bullish, but optimistic.” He said the market is nowhere near “bubble” territory, which requires extremes in both valuation and optimistic sentiment, which we don’t have now. He listed some factors that favor a positive outlook. They include: low interest rates, which make it cheaper to borrow; inflation missing in action; the U.S. dollar at an eight-year high; energy prices cut in half over the last year; a rebounding housing market; a declining jobless rate; household wealth at an all-time high, plus record corporate profits, record profit margins and record profits as a percent of gross domestic product. (Editor’s Note: That may not last, given the weak business spending and investment in the United States.) As for protection against future market dangers, he favors diversification and asset allocation as protection against the inevitable market corrections.

We also hosted a special panel at FreedomFest entitled “A Viennese Waltz Down Wall Street: Austrian Economists Show How They Beat the Market.” The panelists were Adrian Day, a money manager specializing in foreign stocks and natural resources; Robert Murphy, an economist with the Independent Institute and Institute of Energy Research; Chris Casey, director of Windrock Wealth Management; and Keith Weiner, CEO of Monetary Metals.

All of them rely on the Austrian theory of the business cycle but often are afraid of market timing and trying to determine the top of the market. Both Chris Casey and Adrian Day thought the dollar was doomed in the long term but could continue to strengthen in the short term. That means that gold, oil and other commodities quoted in dollars could move lower. 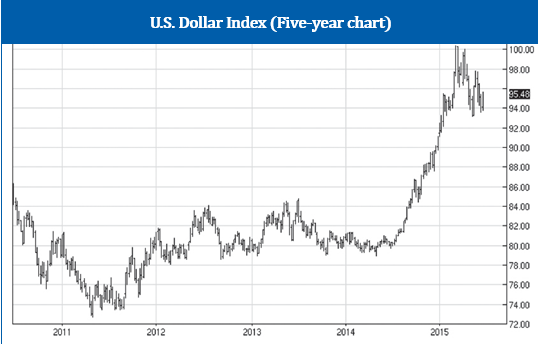 Weiner objected to quoting gold in dollars, insisting that “gold is money” and that the fluctuating dollar will eventually be worthless.

From my perspective, the problem is that gold is no longer technically money — it’s not a medium of exchange like the dollar and other currencies. As long as that is the case, the “bad” money — the dollar — will be spent while the “good” money — gold and silver — will be hoarded (Gresham’s Law).

“The minimum wage is the most anti-black legislation ever passed.” — Milton Friedman

The New York Times last week ran a front-page article, “Push to Lift Hourly Pay is Now Serious Business” (July 24, 2015, p. 1). It noted that governments in cities across America are pushing to raise the minimum wage to $15 an hour in New York City, Los Angeles, San Francisco, Seattle, Chicago and Kansas City. It has become a presidential issue. We may make it our topic for our mock trial at next year’s FreedomFest.

In that same issue of The New York Times, David Brooks wrote a column on the pros and cons of the minimum wage, citing numerous studies by economists. It turns out that the vast majority of academic studies show that raising the minimum wage causes “significant job losses.” In other words, for many workers the $15-an-hour wage becomes a $0 wage because they are laid off or don’t find work.

Brooks also points out that the minimum wage law is a bad “poverty-fighting measure” compared to the earned income credit or teaching workers how to be better trained to get higher-paying jobs.

Government officials need to think twice before they interfere with employer-employee contract negotiations. There are many genuine or natural ways to raise wages, as I pointed out in my May 21, 2015, issue of Skousen CAFÉ.

As David Brooks concludes, there’s a trade-off in raising the minimum wage: “Raising the minimum wage will produce winners among job holders from all backgrounds, but it will disproportionately punish those with the lowest skills, who are least likely to be able to justify higher employment costs.”

O Lecture, Cascade Policy Institute, Portland, Oregon, Aug. 14: In two weeks, I’m traveling to Portland, Oregon, where I grew up, to attend my 50th high school reunion at Sunset High. The Cascade Policy Institute, a free-market think tank in Oregon, has invited me to give a luncheon lecture on Friday, Aug. 14, at Ernesto’s Italian Restaurant, and has invited my subscribers to attend. I look forward to seeing you there. The topic will be “What Really Drives the Economy? Why are Some Countries Rich and Others Poor?” The answer may surprise you. The cost is only $18, which includes lunch. To attend, go to http://mark-skousen-at-cascade.eventbrite.com, call Steven Buckstein at 1-503-242-0900, or email him at steven@cascadepolicy.org.

In case you missed it, I encourage you to read my e-letter column from last week on Eagle Daily Investor about why the global economy isn’t ready for the next recession. I also invite you to comment in the space provided below my commentary.

Last week, I shared the first five of 10 questions that you must be able to answer before you decide whether or not to buy a share of stock in a particular company. If you missed that guidance, I encourage you to check it out. You may want to review those questions because the next five build on their answers. The questions answered in that article are: 1. What does the company do? 2. Wha