The New TLRY Changes the Map

A Sweet Spot from Across the Pond 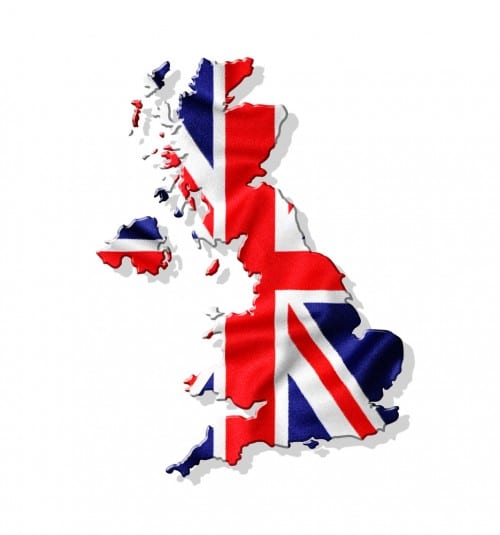 In the midst of all the hand-wringing associated with the U.S. Federal Reserve contemplating the raising of short-term rates by a quarter point from zero, investors are rightfully looking elsewhere for opportunities that offer exponential returns from special situations that aren’t getting front page attention from financial reporting outlets.

Among those enormously enticing themes that are operating under the radar is the bottoming out of the European recession and what that means to a very bruised and battered banking sector where those assets trade at a fraction of pre-2008 levels. The course of intervention by the European Central Bank (ECB) to provide fiscal stimulus is taking on the look of a 2.0 version of the Federal Reserve’s quantitative easing (QE) road to economic recovery, yet its course is about two years behind that of the United States.

This latent recovery in Europe is what makes for an attractive proposition. We already have recent history from which to extrapolate in terms of what sectors are trading appreciably higher while pessimism is rampant among investors and Main Street folks (such as laborers). Similar to the United States, certain data points in Europe are reversing off of multi-month trends of contraction and now reveal several upticks in the way of manufacturing, export, services, pricing trends in housing markets and business confidence.

One doesn’t have to go beyond the banking sector to find rich values from banks trading at or near book value in the midst of shedding non-core assets and paying back government bailouts, with private equity looking to buy those government-owned shares at current prices. Of the major banks within the European Region, my favorite of the lot is U.K.-based Lloyds Banking Group PLC (LYG).

Lloyds has several catalysts working in its favor. The bank has been busily disposing of assets that it views as non-core, with news flow over the course of 2014-2015 being dominated by such items. In addition, Lloyds is aiming to pay out up to 70% of earnings as a dividend by 2016 which, as a high-yield investment newsletter editor, has my full attention. With a current payout ratio of only 42%, price-to-earnings (P/E) multiple of 8.5 times and capital strength steadily improving, the current 3.3% dividend yield has a lot of room to grow.

As for projected earnings, they are unpredictable because of the unforeseen pace of all the cost cutting and the paying down of bailout funds. Earnings per share are forecast to grow by 5-10% in 2015 alone, making Lloyds one of the most attractive growth stocks in the FTSE 100 and poised to become another $5 stock that could see $20 by sometime in 2017. Does it sound heady? Shares of LYG traded north of $45 in 2007, so if it restores 50% of its former pre-recession value, investors can realize a potential return of 300% before including any dividend income. 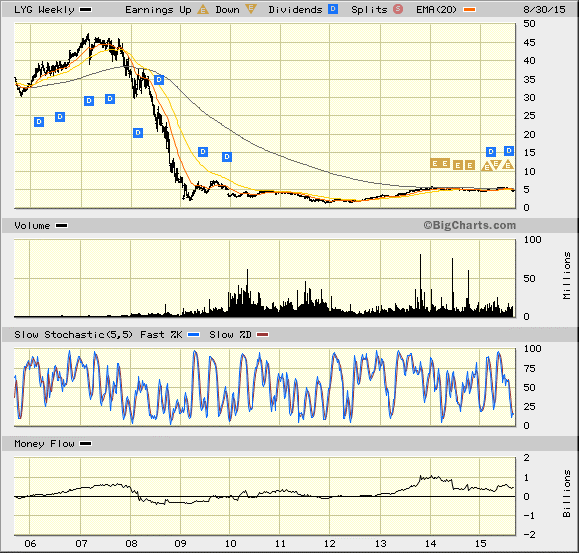 I’m not alone in my enthusiasm. On Aug. 25, Investec upgraded Lloyds from Hold to Buy following the U.K. government selling another 1% of the Lloyds shares that it owns, cutting its stake to 13%. This could be a sequel to Bank of America (BAC) when it, too, was trading at $5 back in late 2012. It later rose above $18 before the current market correction. If past is prologue, shares of LYG look cheap and timely.

My view is that shares of LYG are in that very same place, down almost 90% from their pinnacle in 2007. Blood figuratively is all over the street from current shareholders that never sold. LYG has been ridding itself of assets that don’t bring immediate results to the bottom line. In addition, there has been steady divestiture by the U.K. government from a 33% ownership stake in 2013 to 13% today, with complete divestiture anticipated by 2017.

The template for getting into the leading banks as a major economic region starts turning the corner is in place right here in the United States. Worries of slowing growth in China are consuming the attention of the global markets. The ECB is in the midst of a $1.6 trillion quantitative easing program; this is likely to be accelerated in the weeks ahead to fuel further business investment and consumer lending. Against this backdrop, smart money is quietly backing up the truck at the London Stock Exchange and loading up on shares of Lloyds.

In case you missed it, I encourage you to read my e-letter column from last week about oil, the global currency. I also invite you to comment in the space provided below my commentary.

Friday’s sharp skid in the markets closed another rough week. The Dow Jones dropped 3.25%, the S&P 500 tumbled 3.40% and the NASDAQ fell 2.99%. The MCSI Emerging Markets Index resumed its fall, collapsing 4.85%. Market sentiment across the globe continues to be lousy, even as September is traditionally one of the worst months of the year. To give you an idea how broad-based the sell-off has been, only a single market among the 47 global markets I track on a daily basis is in positive ter

Exclusive  Cannabis Corner: The New Tilray Will Be Stronger