Call it a green light, an all-clear sign or just a rainbow at the end of a storm, the Federal Open Market Committee (FOMC) minutes released Oct. 8 put to rest the debate about what the Fed’s position is on the prospect of rising interest rates. The Fed officials are worried about inflation running below its stated 2.0% target after undershooting it for the past three years. Though the unemployment rate is 5.1%, the labor participation rate remains at an all-time low of 62% of the work force. Fed officials also went out on a limb, estimating inflation wouldn’t hit the 2.0% goal even by the end of 2018.

If these guys are half right about the 2018 timeline, and the market comes to embrace that notion, high-yield assets will be on the receiving end of future capital flows. Both professional and retail investors alike will be placing “risk-on” capital back out on the long end of the yield curve, where much damage has been done to all manner of securities outside of U.S. Treasuries. Buying into this school of thought won’t happen overnight though, especially since this past week saw the tide rise for all the commodities, led by WTI crude getting up to $50/bbl.

The developing world is catching up with advanced economies, but no longer as quickly as anyone would like, and this has spooked investors to the point where 2015 is the first year since 1988 in which there will be a net capital outflow from emerging markets. Clearly, the slowing of China’s economy, now the second-largest economy in the world, is front and center of that capital outflow and, with the latest round of data crossing the tape from the Middle Kingdom, the slowdown hasn’t yet bottomed.

The chart below illustrates that some early bargain hunting in the junk bond space has emerged. Shares of the SPDR Barclays High Yield Bond Fund (JNK) are the de facto barometer for the below-investment-grade credit markets. The high-volume reversal demonstrated over the past five trading sessions might mark a low for the current cycle if, in fact, the Fed staffers are right about inflation and the floor doesn’t fall out from under the energy and commodity markets as was so feared by certain people just two weeks ago. 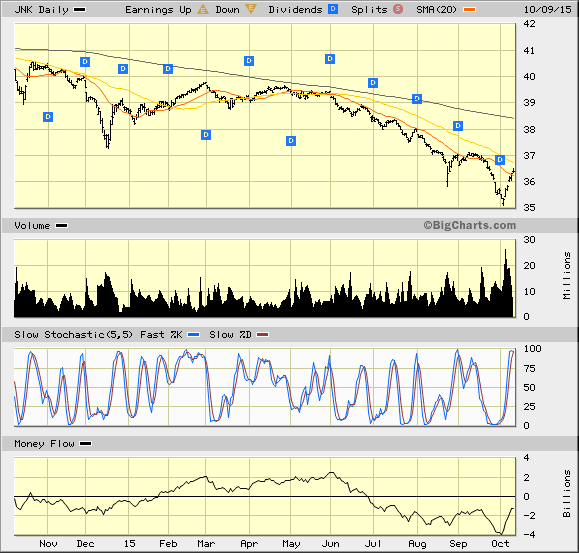 In light of what is expected to be a rough-and-tumble third-quarter earnings season with S&P 500 profits expected to come in -3.9% from this time last year, the market is cheering the prospect of low interest rates for a longer time. The market is rallying on this newfound love for slow growth. But at the end of the day, stocks rally over the long run because of consistent growth on the bottom line. As investors, let’s monitor the bottom-line performance of public companies as they announce their third-quarter results. Let’s also not forget the axiom about improved bottom-line results underlying market gains.

In case you missed it, I encourage you to read my e-letter column from last week about how investing for income can be profitable during turbulent market conditions. I also invite you to comment in the space provided below my commentary.

The Market bounced back strongly last week with the Dow Jones up 3.72%, the S&P 500 rising 3.26% and the NASDAQ recovering 2.61%. The MCSI Emerging Markets Index had an exceptional week, soaring 6.21%. Alaska Air (ALK) dipped below its 50-day moving average and moved to a HOLD. This week’s Bull Market Alert recommendation is Big Lots Inc. (BIG), a discount merchandiser specializing in selling closeout merchandise at its more than 1,400 retail st