What a dramatic change of events for the equity markets and investor sentiment in the past week. European Central Bank President Mario Draghi talked up the expectation that further fiscal stimulus measures are warranted, given the snail’s pace of the region’s economic recovery. Japanese equities spiked higher after trade data fell well short of forecasts, thereby exciting the animal spirits that the Bank of Japan would intervene, once again, to add liquidity in an effort to accelerate growth. And capping the week, China cut interest rates for the fourth time this year in a surprise move, cutting its benchmark one-year lending rate by 25 basis points to 4.35% while also lowering big banks’ reserve requirement ratio by 50 basis points to 17.5% in a move it hopes will stimulate lending.

Oh, how global equity markets love to send stocks higher when the central banks turn up the printing presses. The problem continues to be one of weak economic data leading banks to intervene in the hopes that gross domestic product (GDP) growth will reaccelerate. So far, the great quantitative easing (QE) experiment has demonstrated that though there are patches of recovery in China, Japan, Europe and the United States, they aren’t lasting. The latest consensus forecast for third-quarter GDP for the United States is +0.9% — not even 1.0% growth — and this comes in an environment when interest rates and energy prices are at or near their low for the year.

Whether the broad-based central bank stimulus works or not, the implied notion that it will dominates investor sentiment. Perception always trumps reality when it comes to stock investing. As long as there is the expectation that growth will eventually kick in at some point, due to the massive amounts of perpetual QE, then equity markets can continue to repel bad news as only temporary. And to a great degree, that is exactly what’s been going on both here in the United States and abroad.

The main takeaway for income investors from the sustained commitment by central banks to pump money into the global monetary system and hold rates down is that it creates a flashing green light for buying dividend-based assets in sectors that are sensitive to a slow-growth economy and soft pricing environment for raw materials, with crude oil being the benchmark commodity for how global demand growth can be measured.

WTI crude made a very powerful move off the $43/bbl low to cross up over $50/bbl coming into October, and retail and professional investors piled into oil-producing stocks on the way up, making for a good trade but not necessarily a good proposition as a buy and hold situation. As of last Friday, WTI crude fell back below $45/bbl, and it appears as if a test of the cycle low is underway. If a successful retest occurs, then it would behoove investors to consider a couple beaten-down master limited partnership (MLP) exchange-traded funds (ETFs) that offer a diversified approach to taking a position.

The most conservative of the energy ETFs is Alerian MLP ETF (AMLP), a fund that seeks investment results that correspond to the price and yield performance of its underlying index, the Alerian MLP Infrastructure Index. Not only are investors buying into a basket of the highest quality midstream oil and gas pipeline operators in the United States, but the distributions are considered some of the safest within the entire energy sector. In fact, the fund raised its dividend payout for the Nov. 6 ex-dividend date to $0.289 per unit. 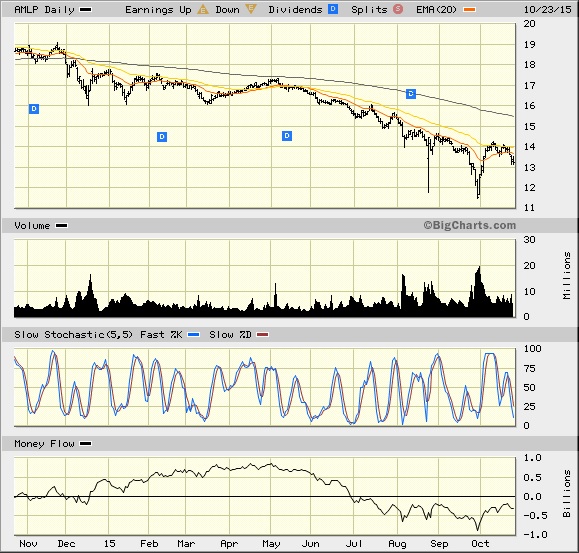 Shares of AMLP pay monthly, and the distributions are taxable at the federal level and exempt at the state level. A year-end 1099 is issued rather than a K-1, so the shares are suitable for IRAs and 401K plans. At its current price of $13.14, the current yield is 9.1%, and it was higher when the shares traded down to $11.50 at the end of September.

This is a fund income investors should put on their watch list. The above chart clearly shows the fund is in a protracted downtrend, with each rally attempt being rebuffed. A move back up through $14 on heavy trading volume would imply a double-bottom, higher-low formation being under construction where it would be appropriate to take a partial position and look for further confirmation with a break above $16. There is no question the temptation to jump into the energy patch is great, but it’s paramount to let the market provide the necessary indicators that move the risk/reward equation toward the reward side.

In case you missed it, I encourage you to read my e-letter column from last week about the allure of a high-yield business development company (BDC). I also invite you to comment in the space provided below.