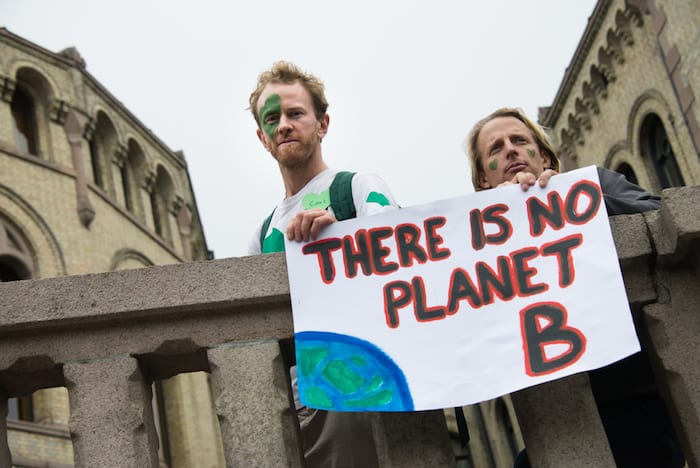 Yesterday I had my students at Chapman University read these two articles (quoted above) and determine whether the authors belonged in one of three groups: climate alarmists, skeptics or climate deniers. After reading the articles and debating, students ended up in all three categories.

Part of the problem is the data. The New York Times’ scientists use one set of temperature readings (a global network of mercury thermometers, which show a steady increase in temperatures) while Forbes.com uses another (satellite temperature measures that show virtually no change since 1979).

Another major issue is whether manmade pollution significantly upsets the environment and, if so, how best to reduce pollution in the industrial world without destroying economic growth and our liberties. (Environmental extremists want to stop economic growth entirely to “save the planet.”)

Pollution has already been reduced dramatically here in the industrial West. For example, air pollution in Los Angeles has declined by 90% in the past 50 years. The problem isn’t the West — it’s the East, specifically China.

The climate alarmists have an agenda that has had a major impact on your investments. Supply-side technological breakthroughs have been the major factor in lower oil & gas prices, but I’m convinced one reason oil prices and energy stocks have collapsed even further is because of lower demand and mandated fuel efficiency standards — and valuations may not recover much because of the focus on alternative energy.

Republican presidential frontrunner Donald Trump’s announced refusal to show up at the next in a never-ending series of televised debates raises a fundamental issue with Fox News. Is Fox News, which is airing the Jan. 28 debate and providing the moderators, serious about reporting the news and addressing the key issues of the day, or is the network just in the entertainment and celebrity business?

Can you really take Megyn Kelly seriously when she gets all gussied up every evening like its prom night? When I appear as a commentator on TV, which I do occasionally as a free-market economist and an investment newsletter editor, I might spend five minutes in the dressing room. But Kelly seems to spend hours in the make-up room before she goes on, applying slick lipstick and styling her ever-changing blond hair. She even appeared in a risqué layout in GQ magazine!

I do not intend to single out just Megyn Kelly, since Fox News is famous for the bimbo image of several of its anchorwomen, who typically wear short shirts, fake hairdos and tight outfits. Fox & Friends in the morning is a perfect example of such an over-the-top emphasis on glamour. I don’t doubt that Kelly and other anchorwomen on Fox News are educated, knowledgeable and intelligent, but their emphasis on image seems so excessive that it’s understandable if many viewers see them as babes rather than brains.

And the anchormen like Bill O’Reilly could be considered just as shameless, not for dressing up in tuxedos or custom-made suits, but for bringing “knock-out” women on their shows under the pretense of having them comment on a news item. Are those the best commentators available or just the ones who are so attractive that they can bring heightened ratings to shows anchored by Bill O’Reilly and others?

With the women on Fox News dressed like they are going out to a cocktail party, no wonder they are not taken seriously by certain people.

There’s at least one high-profile exception on Fox News to the bimbo image: anchorwoman Greta Van Susteren. She’s no bombshell and she does not have an especially attractive voice. But she’s a class act, dresses conservatively and asks tough questions. Fox News would do well to invite her to host the next Fox News debate.

Special Announcement: Subscribers to the Skousen CAFÉ should be happy to know that for the first time in two years, I am hosting the Global Financial Summit, a special private investment seminar, in The Bahamas. The focus will be on “High Income & Fast Money Investing” — combining my two most successful trading services!

I want to encourage you to sign up now. The price is only $695 per person/$995 per couple. And hotel rates at the five-star Atlantis Resort start at just $209 per night. We are limiting this private meeting to 200 attendees only. For more information, go to the website, or call Valerie at 1-855-850-3733. I urge to sign up today if you want the early bird discount.

Unexpected Letter from a Subscriber

Over the weekend, Robert Mish, president of Mish International Monetary Coins and a long-time subscriber, sent out a letter to all his clients and supporters inviting them to “the ONE event I personally do not miss each year. Learn a lot, be entertained, make new friends who share your worldview, network for your business among like-minded people and have fun doing it with 2000+ people. The subjects include investing, cultural war, politics, philosophy, science, health and life extension, finding freedom in an unfree world, low profit vs high profile resistance, libertarian sanctuaries, media, communication, libertarian-themed movies and books, and liberty organizations. Among the key happenings at FreedomFest 2016 are a live taping of the John Stossel Show, George Foreman’s keynote, a film festival, Judge Andrew Napolitano’s ‘Referee of Justice’, several debates, some already set, others to come, several socials, the annual ‘Trial’, Saturday night banquet bash, & more.”

Of course, he’s talking about this year’s FreedomFest, July 13-16, 2016, Las Vegas. We take over the entire Planet Hollywood hotel. There’s nothing like it. We just released a great short video about last year’s FreedomFest that I think you’ll really enjoy. Watch it here: http://freedomfest.com/videos/.

We also have a full, three-day investment program, and we’ve just added Bert Dohmen, editor and publisher of the Wellington Letter, who has been warning about the “Year of the Bear” in 2016, and has been on target so far. You won’t want to miss his speech — he’s always one of the most popular speakers at FreedomFest. Other big name financial speakers include Alex Green, investment director of the Oxford Club, and Keith Fitz-Gerald, editor of Money Map. Each has one of the best investment track records in the business.

“Early Bird” Discount for FreedomFest Absolutely Must End This Sunday, Jan. 31 — Save $150!

Now is the time to take advantage — the early bird discount ends this Sunday, January 31, and can’t be extended. We’ve had to raise our prices this year, but you pay the same rate ($395 per person/$595 per couple) if you sign up now. Hundreds of attendees have taken advantage — now is the time to save. Call 1-855-850-3733 toll-free, or register at http://freedomfest.com/register-now/.

Receive free admission to the MoneyShow in Orlando, Florida, as a guest of Eagle Financial Publications and me. The show’s new venue is at Disney’s Contemporary Resort near the company’s famous theme parks. I especially encourage you to attend my presentation and those of my colleagues Bryan Perry and Nicholas Vardy, among more than 150 other speakers who will address a range of income and growth investments. Register today.

In case you missed it, I encourage you to read my Skousen CAFÉ from last week about the economic indicator that is pointing to a recession this year. I also invite you to comment in the space provided below.