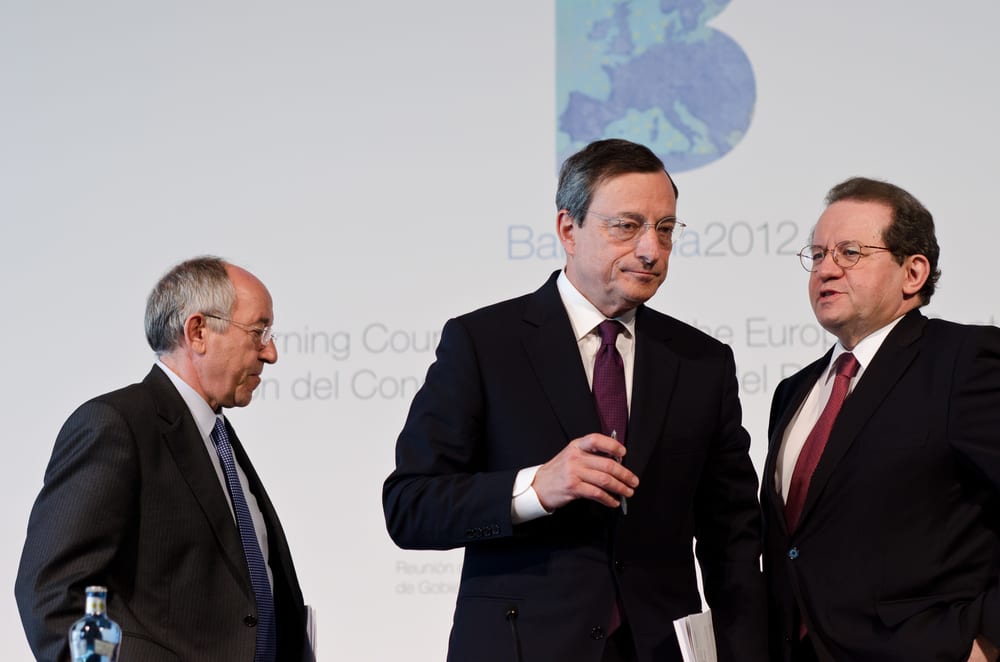 A little over a week ago, European Central Bank (ECB) President Mario Draghi made headlines by reiterating his organization’s commitment to reinvigorating the euro zone by whatever means necessary. He said euro-zone rates would “remain at present or lower levels for an extended period” and there would be “no limits” on action to reflate the euro zone. Mr. Draghi told a news conference: “As we start the new year, downside risks have increased again amid heightened uncertainty about emerging market economies’ growth prospects, volatility in financial and commodity markets and geopolitical risks.”

His comments followed the ECB’s regular meeting, where it kept the bank’s benchmark rate unchanged at 0.05%. The overnight deposit rate was also left unchanged at -0.3%. In December, the ECB had also extended its €60 billion-a-month stimulus program by six months to March 2017. Euro-zone inflation is currently running at 0.2%, way below the ECB’s target of near 2%. “We have the power, willingness and determination to act. There are no to limits how far we are willing to deploy our instruments,” Mr. Draghi said. Expect the ECB to add more fiscal firepower at its next meeting in March.

On Friday, markets got another jolt when the Bank of Japan (BOJ) said that it would adopt a negative interest rate policy for the first time, as a sputtering economy, stubbornly low inflation and turbulent global financial markets threaten to undermine Prime Minister Shinzo Abe’s economic revival plan. The central bank said it cut the deposit rate it pays on cash parked at the BOJ by commercial banks in excess of legally required reserves to negative 0.1% from the previous positive 0.1%.

The goal is to push down borrowing costs across a broad time spectrum to stimulate inflation, the BOJ said. The bank decided to introduce negative rates to “pre-empt the manifestation of [downside] risk and to maintain momentum to achieve the price stability target of 2%.” “We will cut the interest further into negative territory if judged as necessary,” the central bank said.

This directive, dovetailing with that of the ECB, in also in concert with further stimulus measures announced by the People’s Bank of China (PBOC). China’s central bank added cash to the financial system via a short-term lending tool after the government signaled the likelihood of more stimulus at the end of an economic planning meeting attended by the nation’s leaders.

The PBOC injected 30 billion yuan ($4.7 billion) into its open-market operations last Tuesday at a yield of 2.25%, up from 10 billion yuan a week earlier. The central bank stated monetary policy must be more “flexible” and fiscal policy more “forceful” as leaders create “appropriate monetary conditions for structural reforms.” Persistent downward pressure on economic activities and lasting deflationary pressure in the industrial sector have given the central banker debate more of a bias toward easing and will likely pressure the PBOC to ease monetary policy further. The yield on China’s 10-year government bond has dipped below 3.0% to trade at 2.9% — the lowest level since 2009.

The coordinated central bank push towards more fiscal stimulus is good news for equities in general and is especially good for dividend stocks as the threat of the Fed raising rates during the next 60-90 days is greatly diminished. When the ECB, BOJ and PBOC are attempting to vigorously devalue their currencies and pressure borrowing rates lower, there is no need for the Fed to induce a further rally in the dollar that only hurts U.S. export profits from Europe and Asia.

Against this highly dovish backdrop the glide path is clear and the sky blue for income generating assets tied to the domestic economy in defensive sectors. I’ve pointed out in recent weeks that in the blue chip space, consumer property real estate investment trusts (REITs), skilled care REITs, electric utilities and telecom providers offer yields above 4% where preservation of capital is first and foremost.

Moving up the risk scale, select Business Development Companies, or BDCs, with low exposure to energy lending should decouple from the demise of the junk bond market meltdown and rebound with a U.S. economy where gross domestic product (GDP) is forecast to grow by 1-2% for 2016. Heading into February, there are some very well positioned BDCs that subscribers to my Cash Machine investing newsletter have in their portfolios with no loans in default or arrears that are sporting yields north of 11.0%.

BDC valuations face a real disconnect from the real-time sectors of the U.S. economy they make loans in. Last week’s attempt by the market to recover a portion of the heavy losses for the month of January was a welcome event, and it will be even more welcome if it sticks and builds on itself. Much of the market’s activity is tied to the rebound in WTI crude — getting back above $34 a barrel — in conjunction with the central bank moves noted above. The upshot of these recent happenings is that there are good places in this volatile market to invest for yield, and Cash Machine is a great resource regarding where those good places are.

Receive free admission to the MoneyShow in Orlando, Florida, as a guest of Eagle Financial Publications and me. The show’s new venue is at Disney’s Contemporary Resort near the company’s famous theme parks. I especially encourage you to attend my presentations and those of my colleagues Nicholas Vardy and Dr. Mark Skousen, among more than 150 other speakers who will address a range of income and growth investments. Register today.

In case you missed it, I encourage you to read my e-letter column from last week about putting together a plan to deal with market corrections that is simple to understand. I also invite you to comment in the space provided below.

share on:
Exclusive  Buying REITs in a Roth IRA