When the levee breaks, I’ll have no place to stay…

–Led Zeppelin, “When The Levee Breaks”

I am beginning to think the markets are watching the European version of the film “Groundhog Day.” That’s because last Wednesday, stocks were down in a big way over how to deal with the massive debt and bailout issues in Europe.

One week later, stocks around the globe are down big, and wouldn’t you know it, it’s due to fiscal problems in Europe. The catalyst for today’s sell-off came not from Greece, but rather from a much larger and much more important member of the European Union—Spain.

Spain’s borrowing costs spiked higher, and its stock market hit a nine-year low, as investors are becoming increasing fearful over the fiscal conditions in the nation’s banking system. Much like the situation here in the U.S. several years ago, Spain’s financial sector woes are the result of a busted property bubble, and the current recessionary environment in the region isn’t helping Europe’s fourth-largest economy get any better.

Spain never really rung out the excess in its real estate market, and now they are paying the price for their fiscal malfeasance. This situation, combined with Greece’s fiscal mess, has aggravated Europe’s sovereign debt crisis, that’s driving the value of the euro to multi-year lows vs. the dollar. It’s also driving domestic and international stocks lower, and its having a deleterious effect on emerging market equities around the globe.

The charts below of the S&P 500 Index and the iShares MSCI Emerging Markets (EEM) tell the tale of woe for these respective markets. 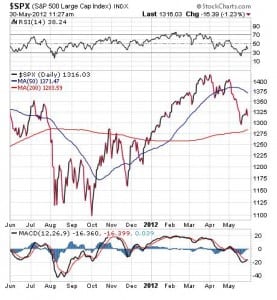 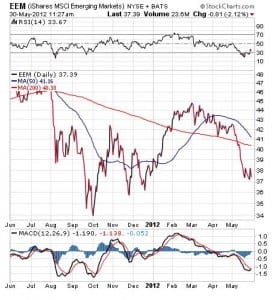 Although both the S&P 500 and EEM have stabilized somewhat after the early May plunge, both sectors are once again headed lower today, and I suspect that if the fiscal levee in Europe continues to spring leaks, we could soon be in for a big flood that would send global equities—including those in the U.S.—much, much lower.

It is because of the potential for such a European deluge that I’ve been so cautious when it comes to investing in this market. I just think there are far too many unknowns right now for me to recommend taking a lot of risk with your serious money.

Although I’ve recommended some targeted exposure to certain sectors in my Successful Investing and High Monthly Income advisory services, the allocations are in sectors that either move independently from Europe, or that move higher when stocks are in decline. I have avoided heavy equity exposure on the long side until the European tumult settles.

I don’t know, and nobody knows, how the European debt crisis will eventually play out. Moreover, there is not much we can do about it from where we sit. What we can do is protect our money from the flood of fiscal pain when Europe’s levees break—and you can do so too by simply by having little or no exposure to risky equity assets.

Fear’s a powerful thing. It can make men do what they normally wouldn’t do, and even what they really don’t want to do.

When those men manage money for a living, fear often pushes them into assets that they hold primarily as safe havens to ride out the tumult.

This is precisely what’s happening today, as the smart money is flooding into the relative safety of U.S. Treasury bonds. 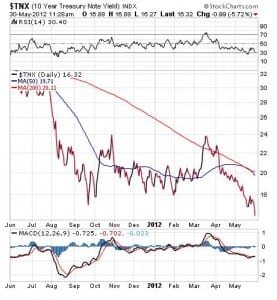 The above chart of the 10-Year Treasury Note yield shows this metric down to a new 52-week low. Yields on the benchmark 10-year note now trade around 1.64%, which actually is a 60-year low.

As buyers move capital en masse into Treasuries, bond prices rise and bond yields sink, and hence the plunge in yields since April. I think that as long as fear over the outcome of Europe remains, we are likely to see more money move into Treasuries. How low can yields go? We’ll find out, but I wouldn’t be surprised to see the fear trade push them even lower.

Wisdom of a Horse Whisperer

“Discipline isn’t a dirty word. Far from it. Discipline is the one thing that separates us from chaos and anarchy. Discipline implies timing. It’s the precursor to good behavior, and it never comes from bad behavior. People who associate discipline with punishment are wrong: with discipline, punishment is unnecessary.”

–Buck Brannaman, The Faraway Horses: The Adventures and Wisdom of One of America’s Most Renowned Horsemen

previous article
Booking “Monsterous” 110.91% Gains
Monster Beverage Corp. (MNST) jumped 2.04% in yesterday's trading.
With your $65.00 September call options up 110.91%, sell your remaining options to lock in your 10th triple-digit percentage gainer for 2012.
Hold on to the stock for now, which is up a solid 24.54% since my initial recommendation.