We’re Crushing the Market with Gold and Silver! 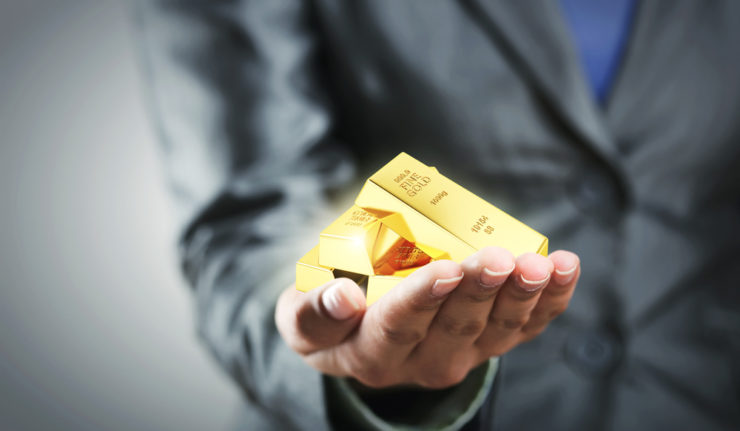 On February 4, 2016, my Investor CAFÉ addressed the question, “Is now the time to buy gold?”

My answer was “yes.” I concluded, “I suspect that precious metals and mining stocks will be a good contrarian play this year, while traditional investments in stocks and bonds will struggle.”

So far, my prediction has been right on the money. For a variety of reasons, gold has moved up 30% this year, and the mining stocks have done even better. Silver is now back up to over $20 an ounce.

The bull market in gold and silver is due to several factors: (a) easy money and persistently low interest rates, (b) corrections in the strong dollar and (c) global instability due to Brexit, Middle East chaos, etc.

I was on CNBC yesterday with Rick Santelli, and talked about gold, the stock market and politics. Watch it here. 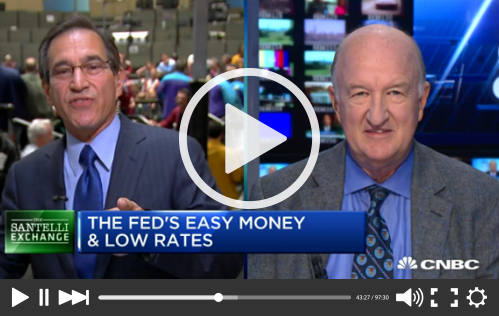 The forecast about gold in my investment newsletter, Forecasts & Strategies, was spot on. But what about my strategy?

I recommended a conservative approach: Invest in a gold mining royalty company that actually was making money (most mining companies have lost money in the past 10 years). So far, we are up nearly 50%. And I think it has more upside potential.

My Chapman University student who won the stock picking contest in my financial economics course during the spring semester chose Hecla Mining and saw his investment double in just three months!

This past Monday, my wife and I celebrated the 4th of July at the New York apartment of Donald Smith, the New York money manager extraordinaire who seeks “deep value” opportunities in the stock market. He started buying gold stocks over a year ago, especially ones that were selling below book value (his specialty). He was a little early, but his patience has paid off (as the old Wall Street saying goes, “You have to be early to make big money”). Don will be at FreedomFest to speak about his “deep value” approach to investing. He’s outperformed Warren Buffett since the 1980s using his unique approach. You don’t want to miss his insights and recommendations (minimum investment in his managed accounts is $50 million!). There still is time to sign up: www.freedomfest.com.

In case you are curious how my non-gold recommendations are doing in Forecasts and Strategies, so far this year the overall portfolio’s return is up 10%, handily beating the market. We have six stocks with double-digit percentage gains from 12% to 44%.

We also are doing well in the healthcare stocks, as they are leading the Dow. It shows that my forecasts other than gold have been on the dot. To read about one of my favorite investment opportunities right now, click here.

Two Top Business and Finance Leaders to Join us in Vegas

I’m pleased to announce that Andy Puzder, CEO of CKE Restaurants (Carl’s Jr and Hardee’s) will be speaking at FreedomFest next week (July 13-16). He will give us his insights on the economy, the elections and Wall Street (he writes regularly for the Wall Street Journal).

He will also be joined by Anthony Scaramucci, the CEO of Skybridge Capital here in New York. Scaramucci produces the famous SALT conference in Las Vegas for hedge fund managers and took over Lou Rukeyser’s “Wall Street Week,” which now airs on Fox Business every Friday night (I will be on his show on July 29). He will be speaking on “Can Trump Make America Great Again?”

I’m excited about FreedomFest next week. Dozens of investors and subscribers still are signing up. There remains time to join us for this fabulous event with more than 260 speakers, panels and debates. You won’t want to miss the Libertarian CEO Panel, and the big debate between #1 Capitalist John Mackey (Whole Foods Market) and #1 Socialist John Roemer (Yale University). The full schedule is now online at www.freedomfest.com.

And don’t forget — the American Eagle silver dollar is our symbol of sound money and liberty at FreedomFest. Everyone who comes buys a silver dollar there and then has his or her picture taken with Steve Forbes and other speakers at the closing panel. Don’t miss out!

P.S. I encourage you to read about a success story in government. For the 4th of July, I wrote this article on “How Ben Franklin Saved the Post Office and Helped Unify America.” There were lots of comments from readers.

In case you missed it, check out my e-letter column from last week about why Brexit is NOT the end for the economy as we know it. I also invite you to comment in the space provided below.

You Blew It! Disability Lawsuits: Why We Hate Lawyers, Part 29

Adam Smith warned us about the “unintended consequences” of passing certain laws. When the Americans for Disability Act (ADA) was passed in 1990, its aim was to give the disabled equal access to places of business. Then came the obtuse regulations and hundreds of technical rules from the Department of Justice.

According to an attorney in Arizona, 95% of businesses haven’t fully complied, and his firm has sued more than 500 businesses in Arizona since the start of February, and says he will go after thousands more, both in the state and out of state. He’s hiring more staff. Small businesses usually settle for $3,500 to $5,000 rather than to resort to a costly fight in court.

The May 28, 2016 issue of the Economist devotes an entire article on the subject called “Frequent Fliers.”

It is scary how lawyers are destroying America one lawsuit at a time, and getting away with it.

Meanwhile, every year legislators promise tort reform, and we never get it. Maybe it’s because most legislators are lawyers.

One of my favorite books on my bookshelf is “29 Reasons Not to Go to Law School.” The cover shows the brain before law school, full of compassion, humility and a desire for truth, and then the brain after law school, full of trivia, greed and arrogance. I hand out copies to students who plan to go to law school. Sadly, it doesn’t seem to help.

previous article
A Six-Strategy Bet on Health Care and Booking 38.9% Option Gains
next article
This Dividend Fund is S&P Royalty