Is the U.S. Stock Market Dying? View This Scary Chart 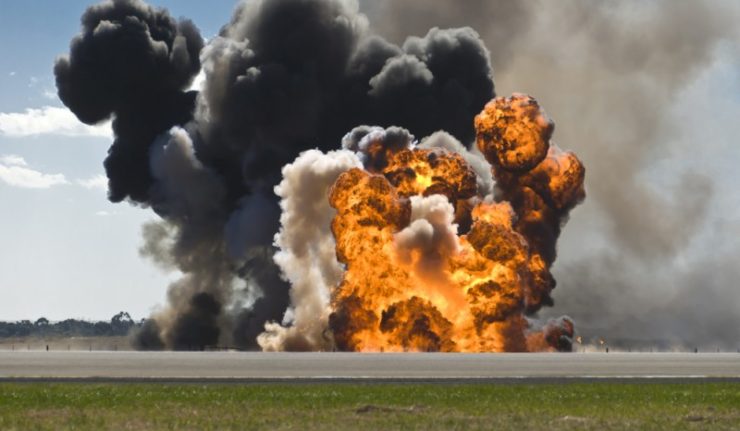 Wall Street seems to be in an ebullient mood as the Dow Jones Industrial Average is near an all-time high and has enjoyed a seven-year bull run. At my newsletter, Forecasts & Strategies, we are enjoying the ride. We are 100% invested and taking advantage of high-dividend paying stocks and funds during a low-interest, low-inflation environment.

But underlining that good news is a scary chart — the number of publicly traded companies is in a sharp secular decline. Twenty years ago in 1996, there were 8,000 publicly traded stocks trading on the NYSE, Nasdaq and other exchanges. Today, that number has dropped to around 3,700 stocks.

Meanwhile, the number of companies going public is increasing dramatically in other parts of the world. See the chart below. 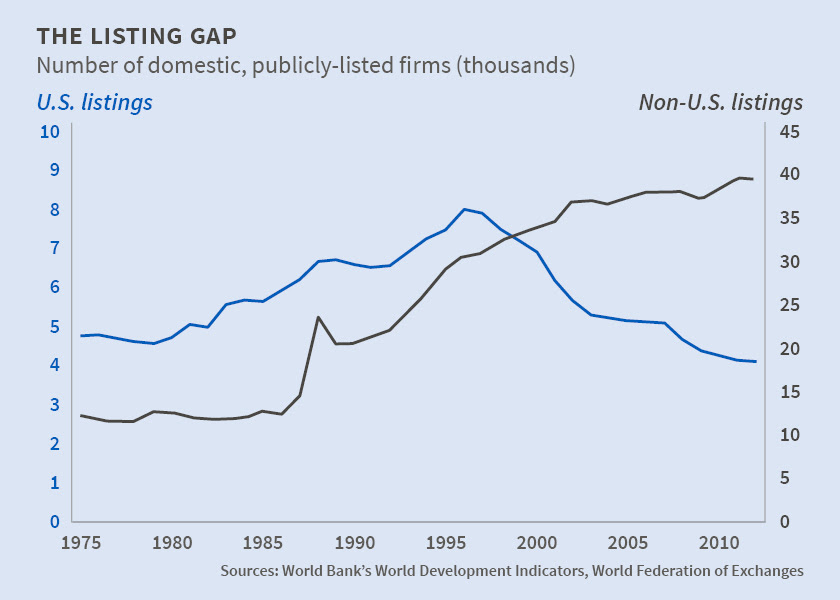 Half of the losses are due to a drop in new listings, and the other half are gone due to delisting of publicly-traded companies that have chosen to go private.

Economists say there are several factors at work. The decline in initial public offerings (IPOs) may be due to increased regulations by the government (Sarbanes-Oxley in 2002 and Dodd-Frank in 2010) which make it much more expensive to go public. Plus, the Nasdaq has imposed stricter requirements to register.

Second, many executives of publicly traded companies hate the volatility of their stocks on the exchanges. As I say in my book, “Investing in One Lesson,” “Wall Street exaggerates everything.”

But there may be a positive reason for the decline in publicly traded securities. A recent report by the National Bureau of Economic Research (NBER) attributes the “U.S. Listing Gap” to increased economic efficiency due to more mergers and acquisitions. Andrew Whitten summarizes the NBER report, “It is possible that private firms are replacing public firms in the U.S. because they are more efficient. This possibility would suggest the U.S. is entering an entirely new phase of development in which a shrinking stock market may indicate increased prospects for growth.”

So maybe this chart is not as scary as we thought.

You Blew It! Trump Is No Reagan

“I think we just found our new Reagan. His name is Donald Trump.” — Wayne Allyn Root

I’ve been corresponding with several hardcore Trump supporters and, from time to time, they suggest that Trump is the “next Reagan.”

Certainly, Trump’s tax-cutting proposal is similar to Reagan’s and is a good idea — anytime you can transfer money from the unproductive public sector to the more efficient private sector, I’m all for it.

But there the comparison ends. Unlike Trump, Reagan knew that you can’t short-cut the road to the White House. You need to see if you have the temperament and ability to be President and can handle the pressure. Reagan ran for governor of California in 1966, and won re-election handily in 1970. He learned from experience what needed to be done to run a state well before seeking the most powerful position in the world.

Reagan also was a historian and an ideological student of the freedom movement. Long before he ran for president, Reagan was a regular reader of The Freeman, National Review and other conservative publications. He surrounded himself with free-market thinkers. He wasn’t just a businessman doing the “art of the deal.”

Finally, Reagan wouldn’t lash out at his opponents the way Trump does. He was much more diplomatic. He grew up from his childhood years in terms of language and demeanor.

He knew better than to constantly insult the media, immigrants and women.

And Reagan was largely in favor of free trade and trade agreements.

I suspect if he were alive today, he would be building bridges, not walls.

This year’s FreedomFest attracted more than 2,100 attendees, and they were not disappointed with keynote speakers Judge Andrew Napolitano, Sens. Rand Paul and Ben Sasse and former heavyweight boxing champion George Foreman, among many others.

As you will see, the debate was far from finished. So get ready for a second bout.

I will be moderating a new debate on presidential candidates Donald Trump and Hillary Clinton, as well as how the outcome of the November election will affect your freedoms and the economy. It takes place at the San Francisco Money Show NEXT WEEK, Tuesday, Aug. 23, at the Marriott Hotel. And get this: there is NO CHARGE to attend.

It will be a no-holds-barred debate, and I’m taking them all on myself. I will ask hard-hitting questions before a “who’s who” of respected FreedomFest speakers who also happen to be adamant Trump supporters: George Gilder, Steve Moore, Art Laffer and Wayne Allyn Root. I call them the Four Horsemen of the Trump Apocalypse.

Me? I’m supporting Gary Johnson, the Libertarian Party candidate, and my bias is certain to show. Let’s see who gets the most tomatoes thrown at the MoneyShow!

The San Francisco MoneyShow, Aug. 23-25, offers a wide variety of speakers and breakout sessions. FreedomFest attendees and readers of my weekly Skousen CAFÉ column may register for FREE by using this link.

I’ve been a regular speaker at the annual San Francisco MoneyShow for almost four decades. I also will be speaking on “Is the Golden Age of Investing Over? Not for This Market-Beating Strategy” and “The SWAN (Sleep Well at Night) Investments: High-Income Stocks that Beat the Market Most of the Time.” For a full list of other top financial speakers, go to www.sanfranciscomoneyshow.com.

You don’t want to miss the fireworks on Tuesday afternoon, starting at 4:15 pm in the San Francisco Marriott Hotel.

But you must register here.

It is next week, so prepare now to join us. See you in San Francisco!

In case you missed it, check out my e-letter column from last week about the perils of progressive taxation. I also invite you to comment in the space provided below my Eagle Daily Investor commentary.