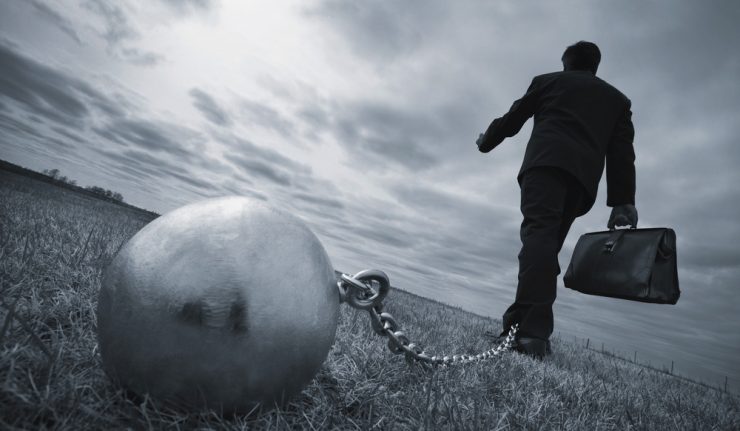 The stock market got a very important data point from the Labor Department today, as the official BLS August employment report showed the economy created 151,000 net new non-farm payroll jobs during the month.

That number was tepid and below most economists’ forecasts, which ranged anywhere from 170,000 to 180,000. While the unemployment rate and the labor participation rate remained steady in the month, there was a disturbing trend in wage growth, which was slower than expected.

As I mentioned in last Friday’s Weekly ETF Report, the recent post-Brexit rally in stocks to all-time highs was largely fueled by the notion that the Federal Reserve and other central banks around the world would keep interest rates low for as far as the eye could see.

Today’s jobs report went a long way toward buttressing that argument, and that’s being reflected in the Fed funds futures.

Traders betting on a rate hike now see about a 21% chance of it happening in September. The odds were 27% prior to the August jobs release. Interestingly, the odds of a December rate hike now are 56%, which is just below the near-58% chance of a hike traders had priced in before the Bureau of Labor Statistics (BLS) release.

The underwhelming August employment report prompted buyers to step back into stocks, but just slightly. Midway through the Friday session, the S&P 500 was up a slight 0.29%.

I suspect that a September rate hike now is largely off the table given the lackluster jobs data, but then, I never believed the Fed would hike rates right before the presidential election.

That said, there are plenty of uncertainties remaining in this market, including the traditional September weakness for stocks (it’s historically the worst month of the year), election uncertainty, a lackluster economy and underwhelming corporate earnings growth.

For now, this market is likely to remain tentative even into next week, when trading desks are back from vacation and at full staff.

So, what is the next move for stocks? While nobody knows for certain, what you can know is how you should react during a variety of market conditions.

Helping you make the right decisions with your investment dollars is what my Successful ETF Investing advisory service is designed for.

If you want to make sure you’re prepared for what’s going to happen next in the markets, then you owe it to yourself to check out Successful ETF Investing today by clicking here.

We conclude our series on international income-driven dividend exchange-traded funds (ETFs) with the SPDR S&P International Dividend ETF (DWX). This fund has a very different portfolio makeup from the other funds we have covered so far, due to its approach in weighing securities by dividend yield rather than by market cap. The approach is bearing fruit for DWX with its 5.2% current yield, a yield which is quite high for international equity funds.

DWX is a large fund with $998 million in total assets, a quarter of which is invested in Australia and another quarter in the United Kingdom and Canada. Furthermore, DWX also has considerable holdings in other countries including Hong Kong, South Africa, France and China, exposing it to certain currency risks but causing less exposure to region-specific risks.

Recently, the fund has experienced a minor drop, being down 0.14% over the past month. However, in the chart below it is clear the fund has had a strong overall performance for the year — up 9.47% year to date, handily beating out the S&P 500’s 5.66%. The fund has an expense ratio of 0.45%. View the current price, volume, performance and top 10 holdings of DWX at ETFU.com.

Most of DWX’s holdings are highly liquid, meaning they can be quickly traded on the market if the need arises. This reduces the overall risk of the fund. If you seek a fund that is striving to provide you with the highest possible dividend yield from around the world and offers relatively low risk, consider looking into SPDR S&P International Dividend ETF (DWX) for a potential addition to your portfolio.

There are a whole lot of billionaires bearish on the equity markets right now.

That bearishness is understandably born out of a sense of unease about this market, a market that’s feeling way too “toppy” and way too overbought.

So, who are these bearish billionaires? Well, the list reads like a who’s who of American finance geniuses.

Here’s a sample of the biggest names who have come out with warnings that this market is headed for trouble, as laid out by the smart folks at Zero Hedge.

Yes, I’ve heard the old adage that you should never argue about money with anyone richer than you. But the fact is that despite these high-profile bearish calls, they have all been wrong… at least so far.

If fact, being long in this market during its post-Brexit spike has been great for most investors, including subscribers to my Successful ETF Investing newsletter.

One reason we’ve done well of late is because we are letting the trend-following rules of what we call the Fabian Plan dictate what actions we take with our money.

Right now, the plan rules are in “buy” mode, meaning we will continue to hold stocks as they make new highs. If and/or when stocks pull back below key trend support at the 200-day moving average, that will be the time when the market tells us that it’s time to take some risk off of the table.

This trend-following approach is your best way to “outsmart” the billionaire bears, and the beauty of the approach is that it relies purely on objective price analysis. That means you don’t have to second guess the market… you just have to respect its decisions.

Right now, those decisions are sending stocks higher in spite of the warnings from Wall Street’s elite. And until such time as a change needs to be made, we will keep betting on the wisdom of the crowds and keep profiting from the push to all-time highs.

Leave it to a poet to put in two sentences what takes a normal person much longer to say.  Here, Pope reminds us that it’s our emotions that usually rule our lives. That can be a negative, but harnessed correctly — as in the service of good, rational goals — it is a formidable force that can’t be stopped.

In case you missed it, I encourage you to read my e-letter column from last week about the year-long, contradictory message of the Federal Reserve.