Is Donald Trump Right about the Stock Market Bubble? 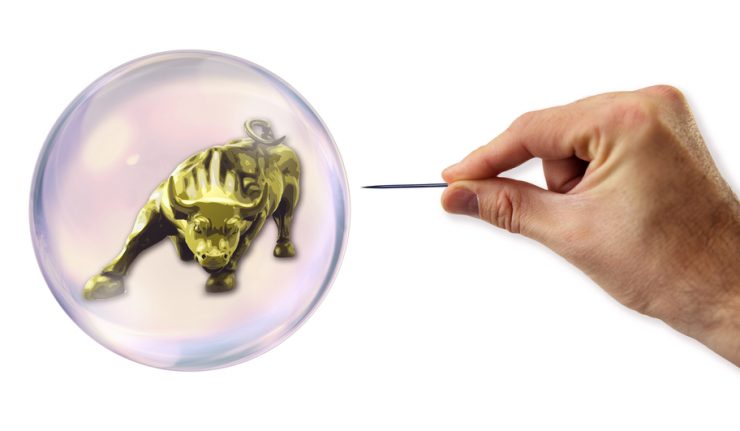 During the first presidential debate last Tuesday, Republican presidential nominee Donald J. Trump once again warned his audience of 85 million people that the U.S. stock market is in a bubble.

As Trump put it:

“Believe me, we are in a bubble right now, and the only thing that looks good is the stock market. But if you raise interest rates even a little bit, that’s going to come crashing down. We are in a big, fat, ugly bubble.”

As with anything Donald Trump says, mainstream Wall Street analysts immediately dismissed it as absurd.

Still, could “The Donald” be right?

Just What is a ‘Bubble’?

Over the weekend, I re-read John Kenneth Galbraith’ “A Short History of Financial Euphoria” published in 1990.

Galbraith, a Harvard professor, was arguably the most famous economist of his day, a leading public intellectual in the 1960s and 1970s, who later in his life wrote several books about the nature of financial mania.

Writing after both Michael Milken and Donald Trump had gone famously bankrupt in the Go Go 1980s (he mentions the size of Trump’s ego repeatedly in the book), Galbraith breaks down the elements of financial mania as follows:

The second type realizes that they are playing a game of musical chairs, and expect that they will be astute enough to find a chair before the music stops.

Why the U.S. Stock Market is Not in a Bubble

Galbraith drew on the lessons learned from some of the greatest financial bubbles in history — Dutch tulips, the South Sea Bubble and the stock market crash of 1929.

The dotcom crash of 2000 and the housing collapse of 2008 were still in the future when Galbraith wrote his book. But both episodes fit Galbraith’s description of financial manias perfectly.

Let’s look at whether Galbraith’s definition of a bubble applies to today’s U.S. stock market.

First, there is a “new development.” Central banks across the globe are printing money, keeping interest rates near zero and pushing on the string of monetary policy to keep global economies afloat. This policy mix is unprecedented.

Second, loose monetary policy is pushing stocks to ever-higher levels and valuations, as investors are starved for yields. The long-term cyclically adjusted price-to-earnings ratio (CAPE), which is quantified by the CAPE Shiller P/E ratio, stands near 27 — far above its long-term average of 16.7.

In a traditional bubble, a euphoric episode is sustained by the will of those who are involved in order to justify the circumstances that are making them rich. And those who disagree with them are, in the words of Galbraith, “ignored, exorcised, or condemned.”

In contrast, today, there is no hint of a “this time it’s different” mood in the U.S. stock market. You don’t hear investors bragging about big gains they have made on a condo in Florida or their 10-bagger gain of at least 1,000% after buying a tech stock. There is no “new economy” paradigm being touted by Wall Street.

In fact, quite the opposite is true.

Despite consumer confidence in the United States hitting nine-year highs, most Americans haven’t been this indifferent to the stock market in 30 years.

Contrast this attitude toward the U.S. stock market with the London property market — an asset class that I believe clearly meets Galbraith’s definition of a bubble.

First, the usual rules of property investing don’t apply to London. As the go-to spot for the world’s billionaires, central London property is the new Swiss bank account, where the world’s rich can store their wealth away from the prying eyes of tax authorities. London property is, as Galbraith would put it, “uniquely desirable.”

Second, the price of London property can only go up. After all, it has done so relentlessly since the city became a center for international finance under Margaret Thatcher. A flat that sold for 5,000 British Pounds (GBP) in 1961 would go for 100,000 GBP in 2015 had it tracked the rate of inflation. Instead, today it sells closer to 1,000,000 GBP.

Third, even the meltdown of 2008 was just a hiccup for this unique and different asset class. To think that the price of London property won’t go up forever is financial lunacy.

Yet, as always, “financial genius always comes before the fall.”

A tumble in London real estate prices has already begun. Real estate agents Savills expects prime central London property prices to drop by 9% in 2016, on top of the 3.3% fall registered in 2015.

Surprisingly, this is not the fault of Brexit.

Instead, it’s because of the tens of thousands of flats in shiny new developments that are flooding the market and depressing prices across the British capital.

Record low interest rates notwithstanding, there is no similar bubble waiting to be pricked in the U.S. stock market.

At some point in the future, the U.S. stock market will once again enter bubble territory, and your cab driver will be giving you stock tips.

But Donald J. Trump’s assertions to the contrary, 2016 is not that time.

P.S. If you want further advice about the best investments to buy, subscribe to The Alpha Investor Letter. One of my picks in the investment newsletter has beaten the Dow 11 to 1 over the past 29 years. I encourage you to subscribe and learn about that amazing, wealth-producing stock by clicking here.

In case you missed it, I encourage you to read my e-letter column from last week about why you should take the opinions of “experts” with a grain of salt. This article, and many other past columns from The Global Guru, can be found on StockInvestor.com. I invite you to follow it on Facebook and Twitter.