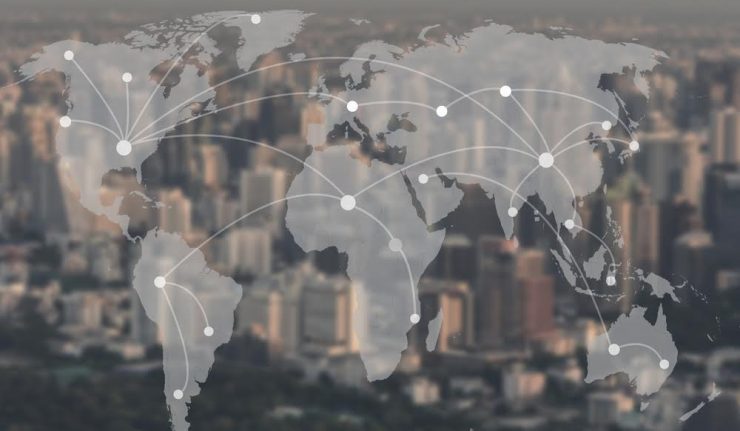 If you’ve been paying even cursory attention to the markets since Election Day, you already know that stocks here in the United States have been on a tear. All three major indices — the Dow Industrials, S&P 500 and NASDAQ Composite — have made a series of new, all-time closing highs since the election of Donald J. Trump as the 45th president.

This move reflects the renewed optimism in markets that investors have about the Trump administration and its agenda of fiscal stimulus (infrastructure spending), tax cuts, regulation rollbacks and the repeal of Obamacare.

Whether all, some or none of these things come to pass next year isn’t the issue today. Rather, the issue now is that the market is pricing in a lot of growth expectations due to the expected Trump policies, and that’s a very nice change in the orientation of markets from the state of the economy we’ve seen during the past eight years.

Now, within the domestic markets, there has been a pronounced rotation out of asset classes such as bonds and gold, and out of equity sectors like utilities, consumer staples, technology, real estate investment trusts (REITs), etc.

Where has all that money gone?

Well, it has migrated to industrials, defense, energy, basic materials and financials — all sectors that stand to benefit from the policy proposals expected by a President Trump.

Yet what about the rest of the global investing landscape? Has money been shunted out of certain global sectors and into others?

The answer is “yes,” somewhat. To see that rotation, all we need do is look at a few telling charts. 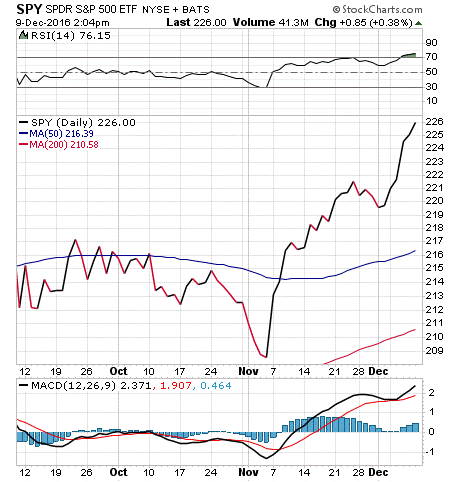 Here we see the benchmark measure of the U.S. market, the SPDR S&P 500 ETF (SPY), surging since Election Day. During the past four weeks, SPY is up 4.4%.

Then we see the price action in the iShares MSCI EAFE ETF (EFA), a measure of stocks in Europe, Australia and the Far East. These shares fell hard in the first three weeks since the election. This week, however, EFA has staged a nice comeback as buyers stepped in to do some bargain hunting. 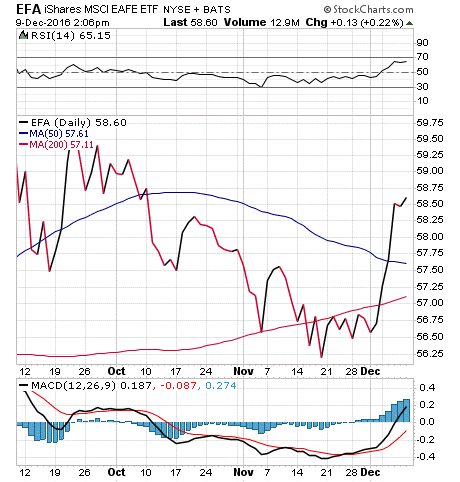 The situation is similar in the lesser-developed foreign markets, which can be seen by looking at the chart below of the iShares MSCI Emerging Markets ETF (EEM). Here we also can see the post-election decline, followed by a nice recent rebound. 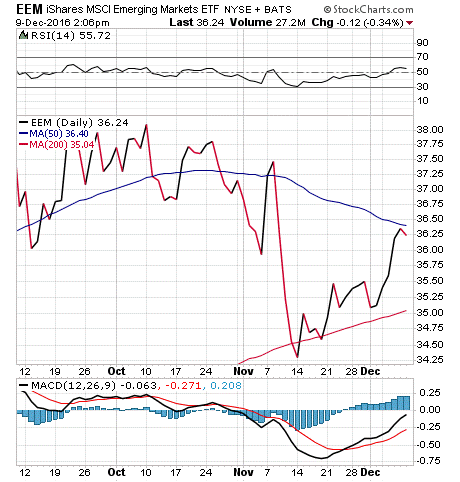 Of course, not all foreign and emerging markets have seen a sell-off since the Trump victory.

The Russian stock market has been one of the best-performers of late, as can be seen by the chart of the VanEck Vectors Russia ETF (RSX). This benchmark measure of the Russian equity market has seen its shares spike some 11.7% over the past four weeks, a stellar move that easily beats the very strong domestic rally. 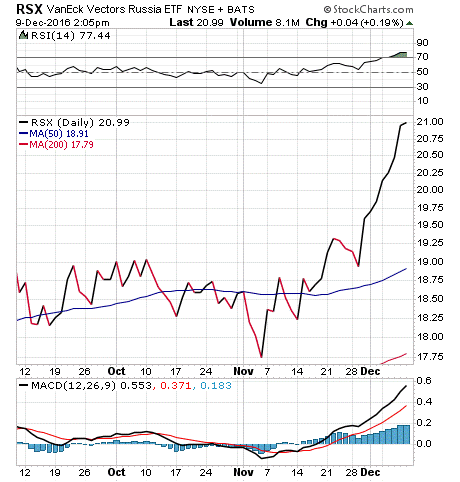 The move higher in Russian stocks has a lot to do with rising oil prices, and the recent agreement (at least in principle) between OPEC and non-OPEC countries on a production cap. If that deal is adhered to, it will be bullish for oil prices… and a likely continued tailwind for Russian stocks (as many are in the energy sector).

Right now, subscribers to my Successful ETF Investing advisory service are benefitting mightily from the Trump money migration. In fact, we even have exposure to stocks in the Russian market!

If you’d like to find out how you can start making money in Russia, Trump-win sectors, and other sectors demonstrating strong price movement, then I invite you to check out Successful ETF Investing right now!

This week’s column gives an overview of the iShares MSCI South Korea Capped ETF (EWY), a single-county exchange-traded fund (ETF) that provides exposure to a selection of large- and mid-cap South Korean companies.

As with most investments oriented towards South Korea, this fund has a very large position in Samsung, which is headquartered near the country’s capital city of Seoul. Indeed, more than 20% of EWY’s assets are allocated to Samsung, which plays a significant role in South Korea’s economy.

For that reason, any potential investors in this fund should be comfortable with investing in Samsung, which made the unprecedented decision in October to recall all of its Galaxy Note 7 smartphones after some of them spontaneously burst into flames during use.

Investors who are undeterred by the fallout from that news and interested in gaining exposure to Samsung shares as they recover can avoid paying international security fees by investing directly in EWY. Plus, EWY does offer a fair degree of diversity, as the index this fund tracks contains 107 stocks.

Exclusive  Bet on Health with This Cap-Weighted Fund

In terms of EWY’s sector weightings, the largest group is technology at 38%, followed by financial services, consumer cyclicals and industrials.

During the past 52 weeks, EWY has risen 17.5%. This rise beats U.S. domestic markets and shows the potential of emerging markets to post big gains. EWY’s double-digit percentage return also means that EWY outperformed many other emerging market funds this year. In total, EWY has more than $3 billion in assets, and its expense ratio of 0.62% is normal for a single-country fund. Its dividend yield of about 2% is paid out annually. 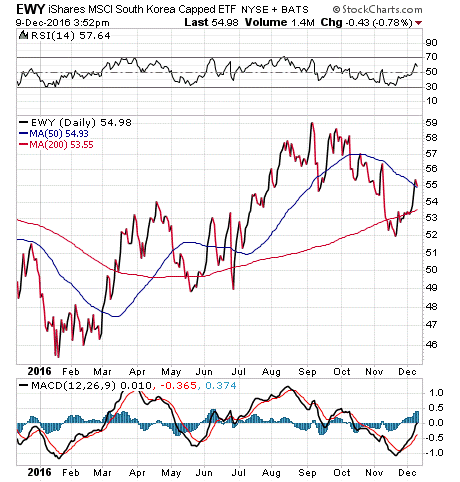 View the current price, volume, performance and top 10 holdings of EWY at ETFU.com.

During the past 30 years, South Korea has surged massively to become a global leader in technology. If you believe this growth may continue, you may wish to consider what the iShares South Korea Capped ETF (EWY) can offer.

The year is nearly over, and that means now is the time to think about what to do with your investments, and your current financial disposition.

But the question is, where do you start?

To answer that important point, I’ve put together a short list of action steps to take that can get you on the right track to tidying up your current issues in 2016, so that you can be ready to hit the ground running at full sprint in 2017.

1) Review your asset allocation. Do you know what percentage of your money is in stocks, bonds, cash and cash alternatives such as gold or silver? The first step toward knowing where you want to go is to know where you are now.
2) Tax-loss harvesting. If you have some losing, dead-money stocks or exchange-traded funds (ETFs) in your portfolio, then now is the time to consider a little tax-loss selling in your taxable accounts. Doing so can take the edge off a big tax bill come April 15.

3) Take advantage of a Roth IRA conversion. A Roth IRA is a great way to keep more of what you have after you retire, and converting a traditional IRA into a Roth IRA might be the easiest way to do that — if your personal situation is right.

4) Give to those you love. Did you know you could give the gift of Roth IRA’s to your adult children and grandchildren? Have you set up a 529 education savings plan for your kids or grandkids yet? How about giving to the charity of your choice? Each of these ways can reduce your overall tax burden, and now is the time to give before the calendar turns.

5) Plan your income streams in 2017. Where will you get your income from in 2017? Will it be from your job, a business, dividend income, annuities, real estate, etc.? Now is the time to make sure you are clear on how much revenue you’ll have coming in next year. Knowing that will help you plan on how much you can afford to spend, and what you can afford to save.
Wisdom from ‘The King’

“Truth is like the sun. You can shut it out for a time, but it ain’t goin’ away.”

The king of rock and roll often sung about the truths of the world. And like the truth here about the sun, you just can’t shut out the truth that Americans are optimistic by nature. That optimism has spilled over to the equity markets since Election Day, and I am happy about that. There’s nothing as powerful as an ebullient mood when it comes to markets, and we’ve certainly seen that truth play out over the past four weeks.

In case you missed it, I encourage you to read my e-letter article from last week about the slowdown of the Trump rally in the markets.

share on:
Exclusive  Gain Exposure to Dividend-Paying Companies with This Fund