Our old friend Mr. Volatility has returned to the markets. Fear of the great European unknown has conjured him back from hiatus, and hence the big price swings we’ve seen in the major domestic markets on Monday and Tuesday. There also has been some conspicuous volatility in both the European and emerging markets of late. All of the action can be seen here in the charts below of the S&P 500, iShares Europe 350 (IEV) and iShares Emerging Markets Index (EEM).

Now, the markets have had to digest a host of news during the past week or so, including a preliminary deal to save Spain’s ailing banks. A proposed 110 billion euro bailout fund to recapitalize the financial system in one of the European Union’s biggest members wasn’t very well received, and after some initial euphoria over the deal, traders realized that nothing of any substance has been done to thwart the fiscal demise of the Old World.

In response to the unknowns about Europe’s future, Spanish and Italian bond yields have spiked. In the case of Italy, you don’t often hear that it is the third-most indebted nation in the world behind borrowing behemoths Japan and the United States. Italy has to borrow some $35 billion a month just to stay afloat, and servicing all of that debt under the weight of big interest rates is going to take its toll not only on Italy, but also on the economic activity in Europe, in China, in the United States — and all over the globe. 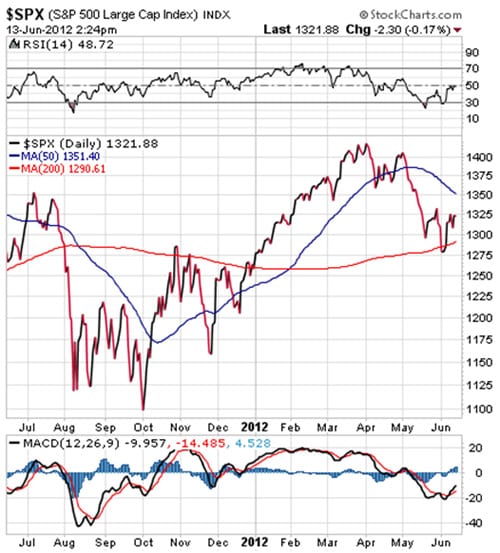 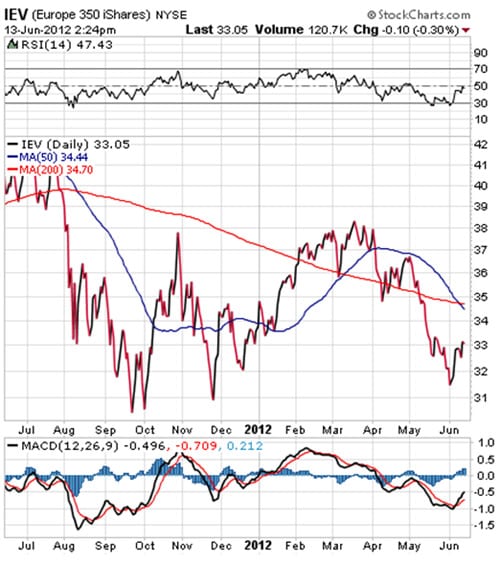 I know there are those who view this situation with an optimistic lens. Most of Wall Street is telling us that too much is being made out of Europe, and that the bad news from the region is absorbable. I have a different view, as I think Europe’s debt situation is a powder keg that really hasn’t begun to ignite.

The fact is nobody really knows what is going to happen to the region. Heck, we don’t even know what will happen this Sunday with Greece’s elections. I think that until the European fog lifts from the political and economic fields, investors are going to keep running into some very big trees, and keep getting caught in some very nasty thickets.

Given this situation, I think one of the best ways to play things here is just to be patient. There is no reason you should put your money at risk with such massive unknowns out there ready to smother your money. When things clear up, I will guide you about what to do.

And, when the coast is clear, it will be time to set sail.

In this quote, German philosopher Arthur Schopenhauer points out that our myopic perspective of the world often leads to seeing things as we want them to be, and not the way they actually are. When it comes to investing, you need to broaden your mind, and try to look at things with better eyes. Doing so will give you a much wider perspective, and a wider perspective just might allow you to see more money-making opportunities.

P.S. Today’s challenging market conditions require even more knowledge than ever for investors and traders like you to keep pace with the latest market intelligence to safeguard your portfolio and to profit from opportunities that only may be available for short periods of time. Join me at this year’s MoneyShow San Francisco, August 24-26, at the San Francisco Marriott Marquis to hear recommendations and advice about how best to profit in 2012 and beyond! Register FREE today by clicking here, by going to DougFabian.sanfranciscomoneyshow.com or by calling 1-800/970-4355 and mentioning priority code 027879.