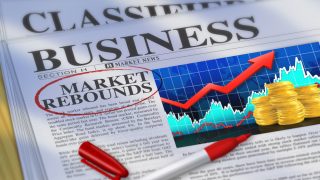 Last week’s Global Guru on “Why the public sector bubble has to pop” really hit a nerve.

I received emails from readers who were indignant, claiming that public sector workers don’t make as much I wrote…

But I also received some supportive emails — including one from my friend John in New York who passed on some shocking numbers about pensions that make the current salary gap in favor of public sector workers in the United States seem trivial.

The economics of snagging a good public sector job today make more financial sense than my decision to waste my time, money and energy getting a fancy education at universities such as Stanford and Harvard.

I’ve been the patsy at the public sector poker party for the past 20 years.

The greatest single frustration I hear from my money management clients is that their lifelong savings for retirement aren’t earning them anything. The Fed’s zero interest rate policy is crushing their retirement plans. And there is very little that even the smartest money managers in the world can do about it.

If you’ve kept your money in the U.S. market, you’ve had it rough. You’ve made next to no money over the last 12 years. You had to endure the dotcom bust and the meltdown of 2008. To add insult to injury, you are 30% down in purchasing power terms, thanks to the ravages of inflation.

Exclusive  Why the Public Sector Employee Bubble Has Got to Pop

Meanwhile, your friends in the public sector are looking forward to pensions that guarantee them a big chunk of their final salaries for life. In fact, their pensions may be going up to adjust for an increase in the cost of living, while you haven’t had a raise in six years.

Say you’re a pubic sector employee in New York City with a pension that pays $100,000 a year.

Let’s look at what it would take for a private sector worker to lock in that $100,000 a year pension.

Here are the numbers my friend John pointed out…

The average Harvard Business School graduate earns about $3.6 million in her first 20 years after graduation.

Assuming she pays 40% in taxes (it would be closer to 50% in Manhattan), she could set aside every penny she earns from age 27 to 47 — and still not be 30% of the way to securing an annual pension of $100,000. Hopefully, she’ll have some pension benefits at her job. But none will guarantee her a salary, unlike her public sector counterparts.

And Harvard Business School grads are the cream of the crop — the much reviled 1% — who work a heckuva lot more than 40 hours a week — and are six times as likely to get fired as the folks in City Hall or the Department of Housing and Urban Development.

My friend Nassim Taleb argues in his book “The Black Swan” that he’d never tell anyone to become an actor, a hedge fund manager, an author or even an entrepreneur.

Why? These folks live in the world of “Extremistan.” Sure, a few will make it. But the bulk of them will fail. Jennifer Anniston is cute. But if she weren’t the one chosen among 7,000 for a TV Series “Friends,” which happened to become a hit, she’d be an anonymous soccer mom in Pasadena — at best.

Instead, Taleb argues, the only rational decision is to enter the world of “Mediocristan” — and to become a lawyer or dentist. You’ll never make a ton of money and make it on the cover of Fortune magazine. But you’ll always have good paying job, and have the time and money to hang out at the country club and play golf with the boys.

I think Taleb’s view of Mediocristan needs to be updated. Once you throw pensions into the equation, today’s ultimate Mediocristan is a high-paying government job. Not only does it pay you a pension for life, you don’t even need to be smart enough to make it into a decent law school. And statistically you’re more likely to die at your desk of natural causes at a government job than to be fired.

The Lessons of Pittsburgh

When I was kid, my Dad used to drive me by the steel mills along the Allegheny River in Pittsburgh. I remember him grumbling that the U.S. Steel plant parking lot was chock full of Cadillacs owned by unionized high school dropouts, while he (a college professor) was driving a 1973 Plymouth Scamp and making much less than they were.

Exclusive  Do You Have Money to Burn?

Well, the steel mills are long gone. And Pittsburgh, once the headquarters of the third largest number of Fortune 500 companies in the United States, including U.S. Steel, Gulf and Rockwell, has half of the population it did back then.

The lesson? Things for public sector workers will be this way… until one day they won’t.

The party for steel workers ended in Pittsburgh in the 1970s when the steel mills picked up and left. It ended for pubic sector workers last week in Stockton, Calif., when the city went bankrupt, unable to fund the expensive perks of its retirees.

But the federal government has much deeper pockets than Stockton. And it’s hiring 16,500 new Internal Revenue Service (IRS) agents to make sure you adhere to the provisions of Obamacare.

The upside? Maybe it’ll become a lot easier to get into Harvard in the future.

But if you’re really smart; you won’t even bother applying.

previous article
A Bullish Bias — and Piling into Our Watchlist Picks
Last week marked the beginning of a big bounce in global stock markets. The Dow Jones Industrial Average was up 2.95%, the S&P 500 rose 3.94%, and the NASDAQ shot up 4.06%. The MSCI Emerging Markets Index outperformed all of the U.S indices by soaring 5.50%.
The performance of your Alpha Investor Letter portfolio was decidedly bullish, with many of your positions up significantly, and their technical outlooks decidedly positive.

Why the Public Sector Employee Bubble Has Got to Pop