The Implications of the Dow Hitting 20,000 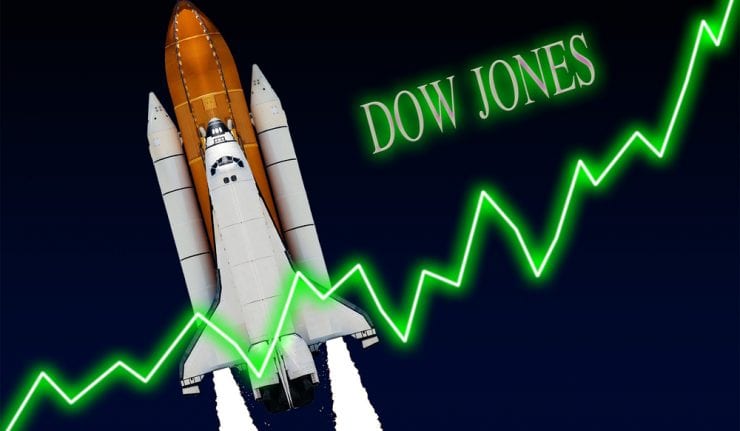 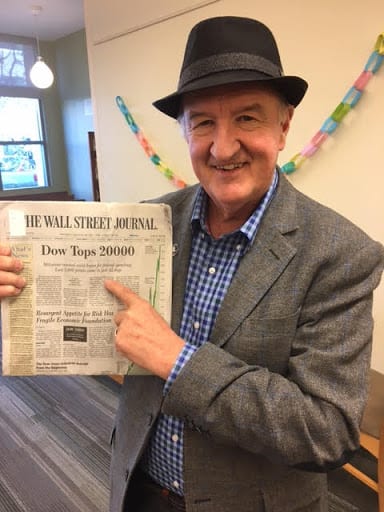 Then, the market retreated after President Trump imposed a temporary ban on refugees and immigrants from the Middle East and threatened to slap tariffs on various U.S. trading partners. Trade wars would not be good for the U.S. economy or financial markets. Trade represents 30% of the U.S. gross domestic product (GDP), and an average 60% of world GDP. And — note to populists — if Trump puts a 20% levy on autos, avocados and Corona beers coming from Mexico, it will be consumers like you paying for that wall, not Mexicans.

Is Donald Trump becoming the “imperial” president? The press refers to the president as POTUS, but maybe PONTIFF is a better acronym. The market is dancing to his every move.

Last week’s issue of the Wall Street Journal announcing the 20,000 milestone of the Dow (see photo above) was full of “Doubting Thomas” articles warning investors not to expect much from the stock market in the next couple of years.

Jason Zweig, for example, wrote a column entitled, “For Investors, Time for Caution, Not Euphoria” (Jan 26, 2017): “With dividend yields about 2.5% for the Dow and 2% for the S&P, not far from historical lows, and stocks trading at almost 29 times inflation-adjusted multi-year profits, or well above their long-term average of about 16, it seems prudent to expect tepid — maybe even putrid — returns for years to come.”

Granted, the stock market is not cheap these days, but I’m more fond of Humphrey Neill’s classic line, “The public is right during the trends, and wrong at both ends.” If we are not at a point of euphoria — this is one of the most disrespected bull markets in history — then perhaps the market has more to run, especially if 4%-plus economic growth returns.

I believe it’s time to invest in individual stocks that are temporarily undervalued. After all, it’s not a stock market, but a market of stocks. I remain 100% invested.

John Stossel Will Give Trump Talk at FreedomFest

Speaking of Trump follies, the Trump debate at last year’s FreedomFest was by far the most controversial session. We are planning an encore “Trump Debate II” at this year’s big show, July 19-22, at the Paris Resort in Las Vegas. The Trump supporters in the debate will be Wayne Allyn Root and Dan Mangru, while Jeffrey Tucker and Matt Welch will be the Trump critics. Reason.com’s Nick Gillespie will serve as moderator. The sparks will fly. Roberto Salinas, president of the Mexican Business Forum, can’t wait to be a part of the debate. He was the one who confronted Trump at FreedomFest in 2015, and his questioning of Trump went viral.

Great news! Fox News host John Stossel will be joining us at FreedomFest. His topic: “CONFRONTATION: My Fights with Donald Trump, Ted Turner and other Central Planners” with video clips of his past encounters with President Donald Trump, et. al. It is not to be missed. 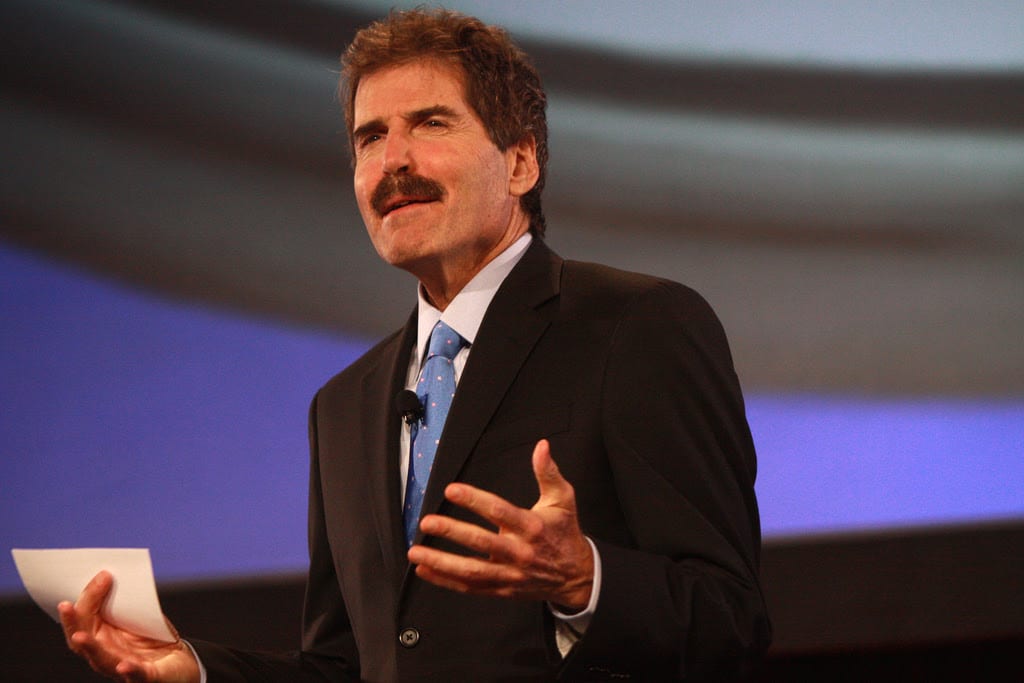 This year’s FreedomFest, our 10th anniversary, is gearing up to be the biggest and best ever, and you won’t want to miss it. A highlight will be the 100th anniversary of Forbes magazine and Steve Forbes’ 70th birthday party!

In fact, I’ve already had three friends change their busy schedules to make room to attend this year’s big show. For example, Keith Fitz-Gerald, the editor of Money Map Report (a respected U.S. financial newsletter) was planning to be in China in July but is now coming to Las Vegas. “I wouldn’t miss it for the world,” he told me on the telephone. “FreedomFest is the conference even speakers like to attend!” Keith will be part of our three-day “financial freedom” seminar there, along with Jim Rogers, Marc Eliot, Alex Green, Peter Schiff, Adrian Day, Nicholas Vardy, Donald G. Smith and Rob Arnott.

I’ll be discussing gold, Trump stocks and other investment strategies in three upcoming conferences in the next couple of months:

— Orlando MoneyShow, Feb. 8-10, Omni Hotel: I will be moderating a panel, “Eight Best ‘Trump’ Stocks to Buy in 2017,” with Adrian Day, Peter Schiff and Marc Lichtenfeld, editor, The Oxford Income Letter. Plus, I will presenting several workshops, including “The Presidential Election Cycle, Income Stocks that Outperform Bonds and Annuities,” and giving a talk to students, “What Every Student Should Know about Money, Investing and Jobs.” Invite your favorite students (Friday only, Feb. 10). To sign up at no charge, use my priority code, 042311, and mention it when you call 1-800-970-4355.

— EconoSummit, Feb. 25-26, The Orleans Hotel, Las Vegas: Sponsored by the Las Vegas Investment Club, I will be speaking on “Lies, Myths and Realities: What Every Investor Should Know about the Global Economy and the Markets in 2017” and “My Lucky Seven Lessons in Money and Investing: Updated for 2017.” The two-day seminar is normally $299 per person, but my subscribers get a $199 credit when you show up, so your net cost is only $100. To sign up, go to http://lvinvestmentclub.com/econosummit-registration-mark-skousen-promo/.

In case you missed it, I encourage you to read my e-letter article from last week on how global trade is vital to economic growth.

What has the Government Done to Our Money?

“Every piece of gold jewelry or coin ever made still has value. Can you say the same thing about stocks or bonds?” — Nicholas Colas

How much better to get wisdom than gold, and good judgment than silver! — Proverbs 16:16

I picked up a couple of rolls of newly minted 2017 American Eagle silver dollars last week to hand out to my students at Chapman University upon completion of my class. We took a picture throwing the silver dollars in the air in front of a statue of Adam Smith. 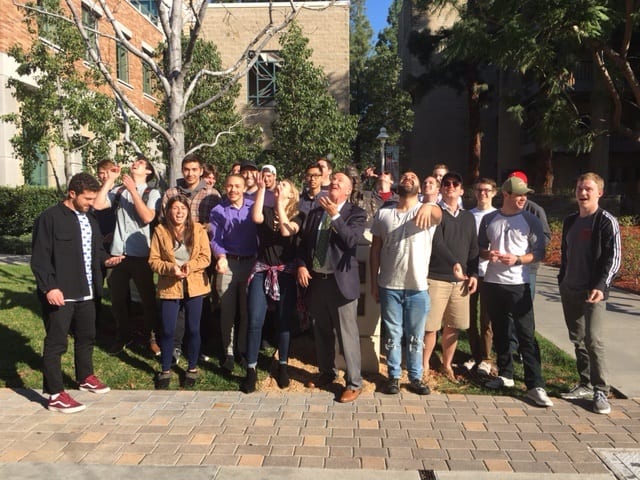 I give each student a silver dollar to remember the class and to see what our currency used to be like. Prior to 1964, Americans carried silver dollars in their pockets, and prior to 1933, gold eagles and double eagles. These are beautiful coins that signaled the greatness of America and the gold standard. Sadly, fewer and fewer Americans even know what a gold double eagle or silver dollar look like.

More than 50 MILLION of these beautiful American eagle silver dollars were minted last year, and where are they? Sitting in safe deposit boxes in the dark, unviewed and unappreciated!

Today, we have token coins and paper money for our monetary system, a reflection of the decline of Western culture. When I passed out the silver dollars to my students, I contrasted the sound of the silver dollar with dropping four token quarters on a desk. What a difference in sound! Students never forget it.

If President Trump really wants to make America great again, how about bringing back into circulation these beautiful gold and silver coins of a bygone era?

previous article
29 Option Spread Strategies You Need to Know (Part 1)
next article
What has the Government Done to Our Money?