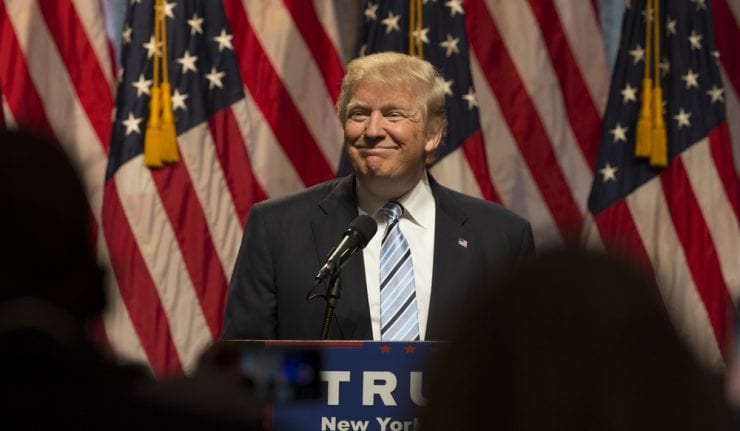 Welcome to the first day of March, or the day after the first de facto State of the Union address by President Trump.

As I write this, the market is up about 320 Dow points, or 1.5%. I guess we know the answer to the question a lot of people were wondering about last night, and that is how the market would react to the Trump address.

If you’ve been a regular reader of this publication, and/or if you’ve been a subscriber to my Successful ETF Investing advisory service, then you know I’ve been telling you that the only thing that really matters to this market right now is President Trump’s pro-growth agenda.

Markets will trade “Trump on” when that agenda looks more like it could become reality. That means stocks will go up, the dollar will go up and bond yields will go up.

Conversely, when it looks like the Trump agenda is facing opposition, or when there appears to be discord among Republicans in Congress over the path to implement the pro-growth economic policies, then markets will trade “Trump off.”

That means the rally will stall, the dollar will slide and bond yields will fall. This Trump-off trade largely has been the case for the past couple of weeks or so, although stocks have managed to grind modestly higher.

Today, however, it is all about the Trump-on trade. And if you are nearly fully invested in this market, as we are in the Successful ETF Investing advisory service, then you are riding this Trump-on market higher.

You might say that being “all-in” this market is a case of the old Wall Street adage, “The trend is your friend.” The even older adage is, “Don’t fight the tape,” but these days not many people even know what a “tape” is (yes, I remember; and yes, I’m old school like that).

Perhaps more importantly, last night’s address by President Trump gave the markets a sense of confidence in Mr. Trump’s ability to tone down the decisive and dark rhetoric he displayed in his inaugural address. Instead, the president opted for a more optimistic, can-do tone coupled with that aforementioned pro-growth agenda.

It is this approach to problem solving that Wall Street suspects will mobilize enough Republicans in Congress to pass pro-growth legislation in harmony with the president’s plans.

And, as I’ve told you for some time, this is what the smart money on Wall Street wants more than anything else.

After last night, it looks increasingly like that’s what Wall Street will get.

If you want to find out how best to put your money to work for the Trump-on trade, then I invite you to check out Successful ETF Investing today!

Even Leftists are Embracing the Trump Trade

Haters are gonna hate, as the kids these days say. But the smart haters are going to hate while also making money.

That’s precisely what leftist icon, and billionaire manipulator of markets, George Soros, has decided to do.

The big money behind so much liberal activism is no fan of President Donald Trump, but when it comes to making money, Soros is a fan of results.

So, when I read Soros’ recent 13F Securities and Exchange Commission filing, which discloses holdings required of institutional investment managers with more than $100 million, it didn’t surprise me that Mr. Soros had embraced the Trump-on trade.

Given the fact that since Election Day, XLF has surged some 22.6%, it’s no wonder a shrewd investor such as Soros would swallow his political pride and embrace the “Trump-On” trade in markets that I’ve been telling you about for weeks.

The moral of the story here is though you may love or hate a certain fact of reality, your money doesn’t care.

Your money, and your investing decisions, should always be objective.

In broader, philosophic terms, this is consistent with the axiom I live by called the “primacy of existence.” All this really means is that you see the world for what it is, i.e. facts are facts, independent of how we might want them to be.

Right now, the market is trading Trump on. That’s a fact of reality that investors fail to acknowledge at their own financial peril… and even haters like George Soros know that.

Perhaps the greatest economist ever, Mises knew that protectionism and trade wars are not only harmful for countries, they also can lead to actual shooting wars. And as much as I am in favor of the pro-growth Trump economic agenda, the protectionism and trade war rhetoric in his speech last night troubles me. Free trade is fair trade, and the issue shouldn’t be looked at in terms of free trade or fair trade, as the president said last night.

In case you missed it, I encourage you to read my column from last week about a massive financial sector fund.