Stronger Wages and the Effects of a Border Tax 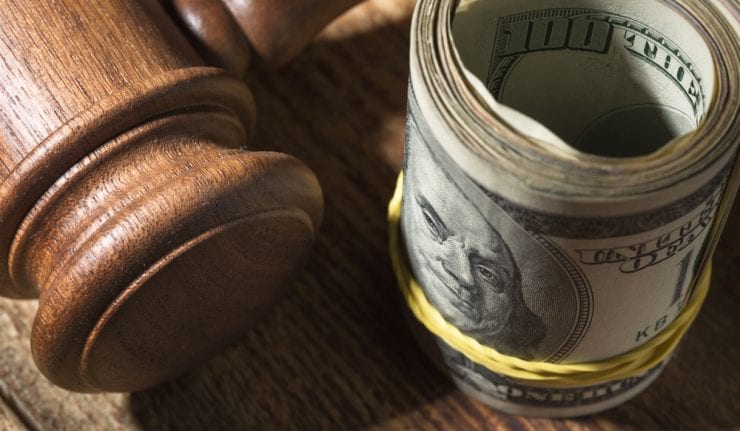 Last Friday’s February employment data release was all the rage for market participants, and this all but guaranteed that the Fed will raise interest rates this week.

The non-farm payrolls increase and the unemployment rate stole the headline show in the newspapers. But really, it was the increase in average hourly earnings that provided the “stop the music” moment.

Average hourly earnings increased 0.2%, leaving them up 2.8% year over year. That is the key takeaway from this report, followed closely by the encouraging understanding that the labor market is strengthening, which is aiding the prospects for stronger economic growth.

Employment generally is regarded as a lagging indicator, yet last Friday’s report was the coincident indicator that the stock market was seeking to corroborate its leading view that the Federal Reserve will be raising the fed funds rate soon, and for the right economic reasons.

The good news for the U.S. job market comes at an interesting time. President Trump is weighing the virtues of a “border adjustment tax” sponsored by the House Republicans. High-profile companies like Ford, Caterpillar and Apple are being wooed by Trump to stay home with new capital investment as he seeks to repatriate jobs and foreign cash reserves under the threat of new import taxes. Trump wants to stop the flow of outsourcing work to foreign-owned service sectors like manager call centers, medical back office operations, insurance claims, IT help desks, legal services and an array of other service industries that are not associated with cars, tractors, smartphones and other finished goods. His ‘America First” agenda thus becomes much trickier to apply.

The chart below shows which industries face the most and least risk from taxes that would penalize companies for offshoring production, based on the share of domestic supply that’s imported. In its most preliminary draft, the border adjustment tax applies to imported products made by U.S. companies. Outsourcing companies have largely gone unnoticed and unmentioned up to now.

If a new border tax structure fails to gain approval, it would represent a good investment thesis for playing emerging markets that have natural advantages and pay lower wages than the United States. Many of those countries offer English language skills, affinity with customer service and familiarity with American culture, while the U.S. economy and all of its domestic services sectors are strengthening. 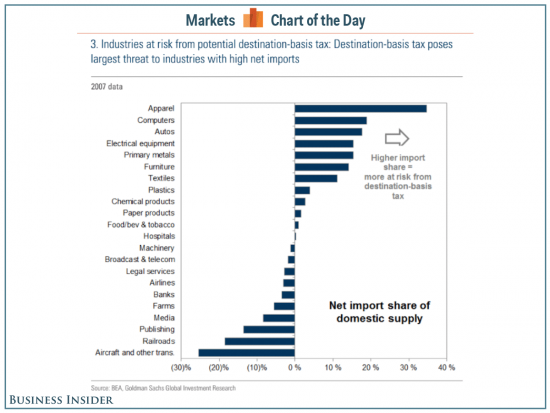 The average cost of a full-time business outsourcing an employee to the Philippines is about $19,300 a year, compared with $72,300 in the United Kingdom and $91,100 in the United States, according to consulting firm Everest Group. The cost calculation includes salaries and expenses related to benefits, administration, facilities, technology and others. And with U.S. wage inflation heating up, the cost for a U.S. employee will top $100,000 per year within 3-5 years.

Taking that $91,100 a year cost for a U.S. outsourcing employee, and assuming half of that number is salary, it would seem that even if the outsourcing industry also was a target of a border adjustment tax, the math still works heavily in the favor of outsourcing to countries like the Philippines and India because the cost per employee is so dramatically cheaper. By and large, foreign outsourcing service firms look to not only survive but continue to thrive in a post-border-adjustment-tax world. 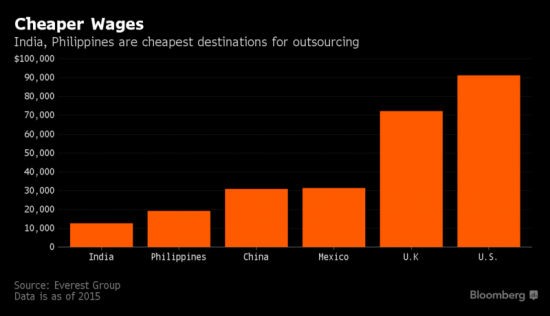 The Dollar Could Literally Vault Higher

The IRS will still collect its 20% off the top if domestic companies maintain their overseas business relationships. If the U.S. economy picks up speed, the tax can be somewhat absorbed in higher prices for goods and services as expected. What is hard to forecast and is truly the wild card in all of this is the future value of the dollar and the possible threat of currency wars and foreign exchange (forex) headwinds that have a dissolving effect on profits.

Supporters of the border adjustment tax (BAT) point to economic studies suggesting the dollar would increase in value under this tax regime, so the cost of imports would remain the same. But economists also point out that many factors affect the value of the dollar, so the adjustment would, at best, be imperfect. They also warn that the stronger dollar would hurt the competitiveness of U.S. exports. And to that point, there is no way to know how China, the European Union, Mexico, Canada and other large trading partners will react to a BAT via currency manipulation.

In a perfect world, the lower corporate and individual income taxes proposed would be offset by higher gross domestic product (GDP) and BAT to  produce a net revenue neutral budget structure for President Trump’s economic team. Here, too, is where the stock market has placed an elevated level of faith. The Congressional Budget Office (CBO) is the official arbiter of tax proposals being considered by Congress. The CBO will almost certainly produce a forecast far below the Trump White House prediction. There’s a long history of administrations, both Republican and Democrat, producing rosier growth estimates than the CBO, but usually the differences amount to a few tenths of a percent or less.

Exclusive  Get Ready For Stagflation

This White House would have to convince doubters, even in its own party, that its economic plan can boost growth rates by 50% from current levels to achieve the numbers needed to not just finance what will certainly be a record federal spending budget, but also quite possibly a record federal budget deficit over the next couple of years. The question is whether a Republican Congress, in which conservative deficit hawks have railed against growing budget deficits for decades, will buy into the president’s aggressive forecast. If the stock market is any indicator, a deal eventually will get done.

For guidance about what to buy and sell, and to seize the latest investment opportunities, consider subscribing to my Cash Machine investment newsletter. I just recommended an energy investment that offers a juicy yield of more than 10%. Click here to learn about how Cash Machine can help you.

In case you missed it, I encourage you to read my e-letter from last week about the focus on the Fed and Janet Yellen as they lay out future rate hikes.

previous article
A Semiconductor Recommendation with Both Momentum and Solid Upside

With the market’s overall momentum ebbing in the past two weeks, the semiconductor sector remains one of the best-performing areas of the U.S. stock market. Formerly known as Avago Technologies Limited, Broadcom Limited (AVGO) is a designer, developer and supplier of analog and digital semiconductor connectivity solutions. The company provides data center networking, home connectivity, broadband access, telecommunications equipment, smartphones and base stations, data center