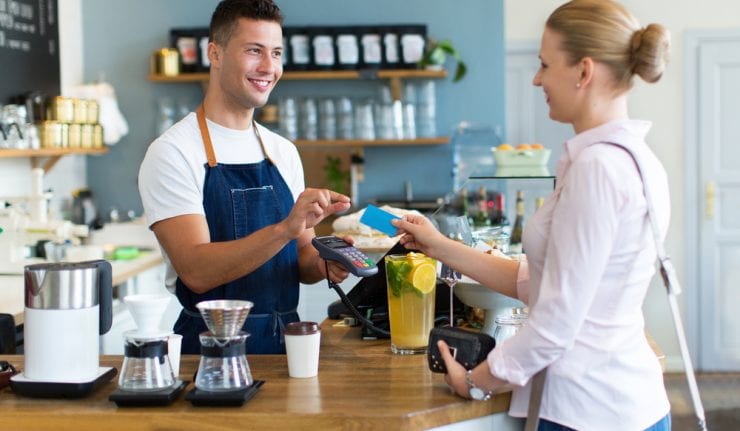 Mainstream media constantly feature the views of critics of the consumer-driven domestic economy who warn that consumers are tapped out from paying too much for housing, taking on too much household debt, struggling with student loans, maxing out credit cards and craving a “new car smell.”

And yes, there are pockets of overextended people who are not prudent stewards of their finances. But if the charts don’t lie, then it stands to reason that the naysayers are simply disgruntled socialists who refuse to see the prosperity flowing within a free market economy. Consider the healthy uptrend in quarterly tracking data that portrays consumer confidence, spending, saving and management of debt.

The reality is that consumer spending in the United States increased to $11,655 billion in the fourth quarter of 2016 from $11,569 billion in the third quarter of 2016 (source: Tradingeconomics.com — United States Consumer Spending). Even during the first quarter of 2016, when several countries saw their sovereign 10-year bonds trade with negative yields and the operating phrase of the day was “global deflationary spiral,” retail sales posted higher growth from the seasonally strong fourth quarter of 2015. That feat is remarkable given the super-bearish tone of the stock market that saw the S&P 500 shed 14% in value from January to March 2016, preceded by the Brexit-related sell-off in the August-October time frame (see chart below).

It is a widely held belief that stock market corrections of 10-15% cause U.S. consumers to hold fast to their purse strings, while keeping a close eye on the daily fluctuations in the value of 401(k) statements, hoping they don’t become 201(k)s. But quite frankly, as can be seen in both the two-year graph of the S&P 500 and the three-year bar chart of U.S. Consumer Spending, the consumer is not deterred in any kind of significant manner by short-term setbacks brought about by events beyond our shores. The labor market and real estate markets were displaying good strength during this six-month period of stock market weakness. Consumers just didn’t get that rattled by it because there were no glaring signs the economy was rolling over. 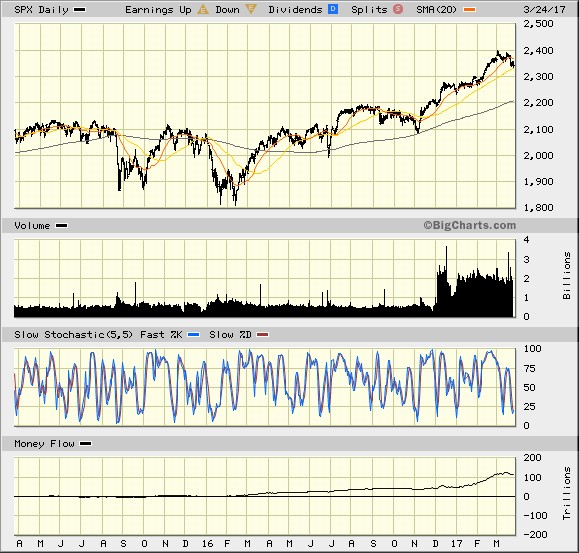 From the table below the bar chart, one can see that the present-day U.S. consumer is functioning pretty much in the middle of the historical range, not too hot and not too cold. Consumer confidence is high, but not overly ebullient, and retail sales are generally higher despite all the doom and gloom surrounding mall traffic. Indeed, spending as a whole is at an all-time record high and household debt as a percentage of gross domestic product (GDP) is near a 10-year low. Certainly, the cost of money as related to super low interest rates and a big decline in the price of gasoline have had a materially positive effect on consumer behavior. With wage inflation making a comeback, there is good reason to believe more gains are in store for the consumer and the U.S. economy. 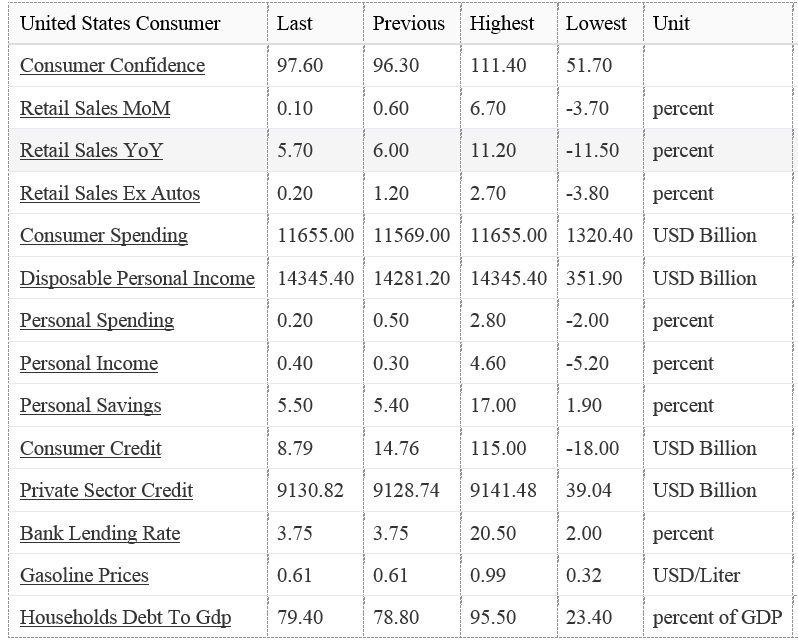 Even as bank lending rates on average have climbed from 2.00% to 3.75% for those with sterling credit, the Commerce Department announced last week that new home sales in February surged 6.1% compared to January to an annual rate of 592,000, which was significantly higher than economists’ consensus estimate of 571,000. In the past 12 months, new home sales are now running 12.8% higher than they were a year ago, and are at a seven-year high. Here too, consumers are likely sensing the Fed’s intent to further normalize interest rates and thus to get off the fence and secure low mortgage rates while they last.

Exclusive  Tapping into the Bull Market in the “New Gold”

But again, there is growing evidence that 2017 is shaping up to be another solid year for the U.S. consumer balance sheet, and this doesn’t take into account any positive catalysts from tax reform that is now on a fast track after the health care repeal-and-replace effort was scrubbed. My point in highlighting the U.S. consumer this week is to make known the durable nature of our consumer-led economy.

Though first-quarter gross domestic product (GDP) data may be revised lower due to a massive trade deficit and a surging dollar during the first quarter of 2017 that has since retraced much of its gains, what defines much of the underlying health of the broad economy is whether job growth, wage growth, savings growth, home appreciation and household debt are moving in the right direction. I would argue that they are. And I also would argue that the stock market agrees with this line of thinking. As much as the mainstream media may try to claim otherwise, the pundits couldn’t be more wrong as the U.S. consumer marches on.

Within my flagship high-yield advisory service Cash Machine, I’ve identified three powerful consumer-based real estate investment trusts (REITs) for our Safe Haven Portfolio that target the exploding use of smartphones and mobile devices, lodging and leisure, as well as e-commerce logistics and distribution. These and other core holdings that are leveraged to the U.S. consumer are a major investment theme that are a pure play on rising discretionary consumer spending, as well as what are considered secular long-term trends. To find out more about these three must-own consumer REITs and other high-yield assets with strong sector momentum, click here to learn more about how to maximize income in the current market landscape.

In case you missed it, I encourage you to read my e-letter from last week about how to take advantage of volatility in the technology sector.

This week’s Momentum Trader Alert recommendation takes us to Silicon Valley in the form of Nanometrics Inc. (NANO), a microcap technology play. Founded in 1975, Nanometrics, Inc. is a leader in the design and manufacture of products for the semiconductor, data storage and flat panel display industries. Its leading products are thin film measurement and analysis tools used to analyze manufacturing quality at critical steps in the production process. These tools are cr

Exclusive  A Smaller Fund that Focuses on the U.S. Floating-Rate Bond Market