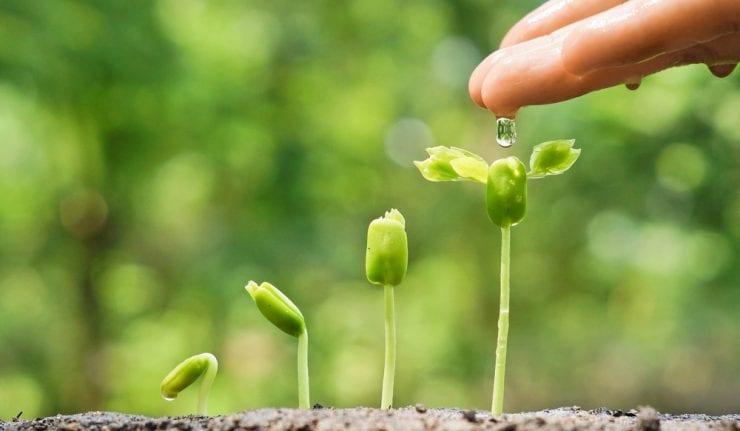 One would think the Fed officials would like to get out of the spotlight and just read the data, meet every two months, decide to raise or not raise rates, explain why and return to their cozy offices.

That’s how the Fed used to operate. There was no mid-Federal Open Market Committee (FOMC) meeting state of affairs, or a litany of February governor speeches at every high-dollar chicken and pea luncheon spanning the country.

Although many of the functions the Fed conducts are business as usual, the big difference today from years gone by is how the Fed fails to speak with one voice. Now, investors have to play the proverbial guessing game, which results in market volatility.

This past Friday, the 10-year Treasury briefly traded under 2.3% before reversing higher into the market’s close. It left U.S. Treasuries little changed as stocks and the U.S. dollar spent time recovering from the Obamacare repeal/replace drama that culminated in the House of Representatives’ failure to vote on the proposed reform legislation on Friday, March 24. Key U.S. economic data for the week was light of consensus (ISM Services, Non-farm payrolls), but U.S. gross domestic product (GDP) growth for the fourth quarter of 2016 was finalized at a 2.1% seasonally adjusted annual rate, which was revised up from the prior estimate of 1.9%. The GDP forecasts for Q1 are all over the place, with the Atlanta Fed’s model forecasting 1.2% while the New York Fed’s model shows 2.9% growth.

Pushing against the softer data of the past two weeks, the Conference Board’s Consumer Confidence index jumped to 125.6 for March, a 16-year high and further evidence of the non-correlation between rosy economic sentiment in the United States and actual economic activity. That was especially the case after U.S. personal spending growth for February came out at 0.1% m/m, missing the consensus of 0.2%. Again, if consumers are feeling more optimistic now than at any other time in the past 16 years, why did personal spending fall below the estimate?

It is only the first week of baseball season and the Fed threw the market a sharp curveball by bringing up the idea of rolling off the central bank’s $4.5 trillion balance sheet instead of holding assets to maturity. New York Fed President Dudley said that the Fed potentially could pause rate hikes once it began that process. Other Fed officials have not discussed a serious pause, with nine policymakers seeing three or four rate hikes in 2018 on top of the generally-expected three this year. Those forecasts do not suggest a very long hesitation, so perhaps Dudley is in a minority of one.

Finding Equilibrium After Reflating the World of Financial Assets

The catch-22 is that the Fed floated the idea of an exit strategy. The Dow then gave up a 200-point rally and traded into negative territory inside of one hour. It harks back to similar commentary that former Fed Chairman Ben Bernanke laid out in mid-2013 when he talked about exiting the stimulus program. Bond yields jumped much higher than expected and spurred numerous Fed governors to try to talk back the market, especially bond yields. It seems the Fed has a real issue of not letting the markets trade freely in accordance with real-time sentiment.

The fact that the market would react so dynamically without the Fed actually doing anything, and only talking about slowly paring down its $4.5 trillion balance sheet in what would be a long and drawn-out process, means the Federal Reserve has created a trigger-happy landscape in several asset classes. This is the very thing they were lecturing everyone about, saying Fed policy going forward would be different this time, after the 2007-08 financial crisis pushed Fed rates too low for a prolonged period to stimulate the housing industry. Although there are definite signs of an improving economy, it’s my view the stock market is still tethered to a dovish Fed.

Interest rates have been down so low for so long that the thought of the 10-year Treasury reverting back to the historical mean of 4.58% sounds surreal. We’re talking about 2.2% higher than where the 10-year bond currently trades. If the economy is humming on all cylinders in a couple of years, I don’t see this as major issue. It certainly would provide the swelling numbers of retirees a decent shot at a real savings rate and some mouthwatering bond yields. 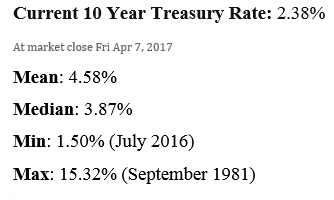 Financial markets have been living the dream in an ultra-low-interest-rate market. With inflation starting to return to a more normal level of 2.0%-plus, investors should not only accept that interest rates should normalize in the coming years with a healthier economy, but prepare for higher rates by repositioning assets accordingly. Below are current 10-year sovereign bond yields of developed countries that clearly show why U.S. notes remain in high demand. Aside from Australia, U.S. bonds pay the most interest.

How much the Fed intends to reduce its balance sheet is anyone’s guess. But in today’s global market, currency in circulation has grown to $1.5 trillion. Before the 2007-08 financial crisis, the Fed’s balance sheet consisted of about $800 billion in currency liabilities and slightly above that in assets, almost all of which was Treasuries. Because of nominal GDP, low interest rates and increased foreign demand for dollars, the Fed estimates that the amount of circulation will grow to $2.5 trillion or more over the next decade.

In short, growth in the public domain for dollar currency alone implies that the Fed will need a much larger balance sheet than it did before the 2007-2008 financial crisis. The Fed would do well by the markets to explain things like this scenario in rational terms in conjunction with market-moving headlines at a post-FOMC press conference. Two things would happen. Investors would better understand the scope and scale of the Fed’s intentions and the stock market would enjoy a smoother ride.

Having a good working understanding of how the Fed and markets operate in concert is only one aspect of how Cash Machine allocates its portfolio weightings in the many high-yield sectors that make investing for income not only exciting but financially rewarding. I invite readers of this column to click here to discover how to take full advantage of the investing opportunity that awaits income investors of all stripes.

In case you missed it, I encourage you to read my e-letter from last week about how consumer confidence can work for a yield-oriented investor.

previous article
Buying Another Tech Momentum Play and Booking 15.24% and 25.81% Gains
next article
My Return to Dubai: The Middle East’s City of Gold