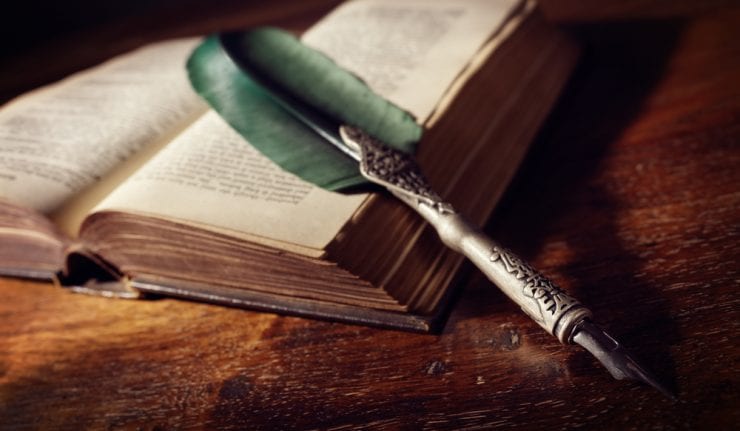 I love literature, and I studied the art intensely during my college years. While most of my time these days is focused on finding the best exchange-traded funds (ETFs) for my subscribers to own, I still devote a block of time each week to reading and studying literary fiction.

Aristotle once wrote that fiction is of greater philosophical importance than history, and the reason why is because “history represents things as they are, while fiction represents them as they might be and ought to be.”

I think it’s important to look at the world, and one’s life, as an exercise in developing things as they ought to be. Literature helps us in that herculean task.

As for the basic attributes of literature (i.e. the novel), there’s style, characterization, plot and theme. Of these, the most important is plot, as that is basically the purposeful progression of events in the story.

Yet, a work of literature’s plot cannot be properly constructed without a theme.

The theme is basically the summation of a novel’s abstract meaning. For example, the theme of Victor Hugo’s “Les Miserables” is: “The injustice of society toward its lower classes.” The theme of George Orwell’s “1984” is: “The horror of totalitarian government.”

Great novels always have discernible themes, and ones that can be put succinctly the way I just did with “Les Miserables” and “1984.”

Now, when it comes to ETFs, there’s a growing trend in the industry toward investing in themes.

A recent article in Investor’s Business Daily detailed some of the pros and cons of investing in so-called “thematic ETFs.”

These are ETFs that are designed to take advantage of specific trends and/or themes in society.

For example, one big theme in the investment space today is robotics and the rise of artificial intelligence (AI).

Here’s what the Investor’s Business Daily article stated about this investable theme’s ETF:

Global X Robotics & Artificial Intelligence (BOTZ) seizes the companies that stand to gain most from the trend. Its stock holdings include Mobileye, Intuitive Surgical (ISRG) and iRobot (IRBT).

The AI theme is big in literature, too. Isaac Asimov’s “Robot” series is one example, but perhaps the most well-known example of a literary AI theme is the “Terminator” film series.

The theme of the “Terminator” series is: “The rise of the machines,” i.e. AI gone terribly wrong and turning on its creator.

For investors, the AI investment theme might be: “Taking advantage of the rise of the machines.”

Like great literature, a great ETF might just be the one with the most targeted, popular theme.

So, what’s the literary theme in your ETF portfolio?

How do I know this? Well, over the past few months there have been multiple sentiment indicators that have come in very strong.

The latest was a recent Pew Research poll that showed nearly six in 10 people in the United States (58%) think the economic situation is good. That’s a big leap from last year, when only 44% described the U.S. economy as good. It also is the most positive assessment of economic conditions since 2007.

Then there’s the actual price performance of equities.

So, what’s driving the price of these benchmark ETFs?

Check that. Let’s call them “yuge” ETF inflows, as in Trump-sized inflows.

According to the website ETF.com, during the first three months of the year, inflows into ETFs were $134.7 billion. Compare that figure to the relatively puny $29.6 billion in inflows in Q1 2016, and you see why “yuge” is an accurate description.

Moreover, if inflows continue at their current pace, then 2017 will see nearly $540 billion flood into the market. That would crush last year’s record inflow total of $287.5 billion.

It is the record-pace of fund inflows that really tells us investors are feeling good about the economy and the markets.

Yes, we should worry about policy failures in Washington, the lack of hard economic data supporting this rally and the upcoming corporate earnings season.

Yet, investors stay on the sidelines at their own peril, as the record levels of capital coming into ETFs are going to provide a significant bid higher for equities.

You might even say they will ensure a “yuge” gain in markets going forward.

If you’d like to find out how subscribers to my Successful ETF Investing advisory service are riding this yuge market wave right now, I invite you to click here to subscribe today!

“You should never be comfortable, man. Being comfortable fouled up a lot of musicians.”

The jazz great was known to push the boundaries of his chosen musical genre. In doing so, he became known as one of the most influential musical geniuses of the 20th century. If you want to do something different, or if you want to achieve better results with your money, then challenge yourself to get out of your comfort zone. It’s not easy, I will grant you that. However, anything worthwhile is almost never easy. Approach your life with a sense of discomfort and you’ll be surprised at what you can achieve.

In case you missed it, I encourage you to read my article from last week about Europe’s largest single-country ETF.

It was yet another strong month for your Smart Money Masters portfolio, at a time when U.S. stock markets ended below where they started. Your very first Smart Money Masters recommendation, Wilbur Ross’ Navigator Holdings Ltd. (NVGS), continued its relentless rise, gaining another 5.19%. George Soros’ bet on Liberty Broadband (LBRDK) als