Are Stocks about to Step on a Low-Volatility Land Mine? 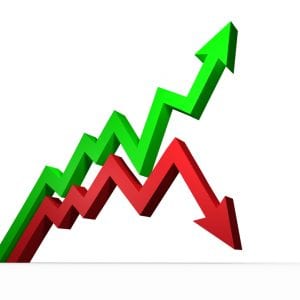 If it seems like the action in the equity markets has been, well, a bit boring lately, then you’re not wrong.

In fact, on Tuesday, markets hit the lowest level of volatility in some 23 years intraday, before climbing back up late in the session.

That reading is based on the CBOE Volatility Index, or $VIX, which also is known as the “fear index.” As you can see by the chart here, there’s not much fear in the market right now. Yet the absence of fear reflected in the low VIX is, paradoxically, causing a lot of fear on Wall Street.

The reason why is because when the fear (i.e. complacency) level gets so low, the market sees that as having no way to go but up… and that means a likely period of volatile selling ahead for the major indices.

At least, that’s what a lot of Wall Street pundits have been saying is likely to happen.

Now, while this might be true theoretically (what comes down always goes up), the real question is: When will the VIX move higher, and how long can it stay at uber-low levels?

The answer to the first question requires something no human is equipped with, and that is the ability to see the future. However, the answer to the second question is the VIX can stay low for a very long time… and a lot longer than its current low-volatility run.

To get a bit more insight into this thesis, I turned to my friend and market-watcher extraordinaire Tom Essaye, editor of the Sevens Report (a must-read publication for any serious investor).

Here’s what Tom told me about this low-VIX situation:

Tom went on to explain that there have been two specific periods of similarly low volatility in the last 20 years. The first occurred in mid-2014 and lasted 75 days. The second was from November 2006 to March 2007, and that lasted 79 days. The current period of historically low volatility has been going on for 78 days (including yesterday).

The big takeaway from Tom, and me, is that while we’re clearly near the top of recent periods of low volatility, remember that in both instances volatility only gradually rose. Moreover, markets didn’t see significant pullbacks until months and quarters later.

So, if you get the urge to suddenly run out and sell stocks just because volatility is low, you’d be making a big mistake.

And while some big names are selling here (see the Gundlach section below), the lack of volatility leading to an impending sell-off is not a good reason to do so.

The bottom line is we are not yet dangerously close to stepping on a low-volatility land mine, so walk upright (though always cautiously) through the market battlefield.

If you want to find out how my subscribers are winning the war against mediocre market returns, then I invite you to check out my Successful ETF Investing newsletter today!

“Just the minute the FBI begins making recommendations on what should be done with its information, it becomes a Gestapo.”

The big news in D.C. is the firing of FBI Director James Comey. And while this shouldn’t have a direct effect on markets, it does influence the mood in Washington. That mood needs to be at least congenial enough to get Republicans to agree on tax reform, as that is the one real positive capable of allowing stocks to continue to move higher.

In case you missed it, I encourage you to read my e-letter from last week about how the market largely ignored the past week’s Fed meeting.