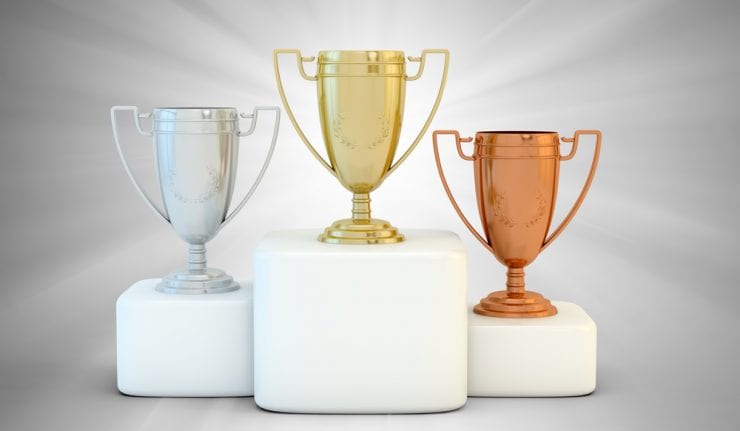 The Sohn Investment Conference is an annual conference of hedge fund bigwigs held at the posh Lincoln Center in New York City.

Named after Ira Sohn, a Wall Street trader who died at a young age, the Sohn Investment Conference has brought together hedge fund titans offering their annual predictions over the past 22 years.

That track record of these recommendations ranges from “brilliant” to complete “bust.”

And I certainly wouldn’t rely on them alone to construct a portfolio of investments.

Nevertheless, the recommendations do offer insight into the thinking of some of the world’s “smartest money.”

With that, here are three notable picks from this year’s conference held last week.

Last year, this former Facebook executive and venture capitalist famously predicted that Amazon.com (AMZN) was a 10x opportunity within 10 years.

His prediction was greeted with skepticism as it implied a market cap of $3 trillion for the online retailer.

With Amazon up 40% over the last 12 months, Palihapitiya’s prediction is off to a good start.

Still, when Palihapitiya recommended Tesla Inc. (TSLA) this year, many in the audience chuckled.

Tesla is a stock you either love or hate.

Skeptics see Tesla trading at an all-time high as a textbook story stock. Either it’s going to be a historic success that will revolutionize a broad range of industries or it’s a stock bubble just waiting to pop.

Palihapitiya is optimistic. As he points out, Tesla’s Model X and Model S quickly dominated large swaths of the market in their categories. Palihapitiya expects the Model 3 to consolidate these gains and establish itself as the car of the future. The Model 3 will banish the internal combustion engines to the bin of history.

Surprisingly, Palihapitiya is not recommending Tesla’s stock. Instead, he’s buying Tesla’s convertible bonds that mature in 2022.

The hybrid convertible securities don’t lose money as long as Tesla’s market value doesn’t drop below $15 billion. That would imply a 66% drop in Tesla’s stock price. At the same time, the bonds allow Palihapitiya to maintain his upside in the stock.

That’s smart. And Palihapitiya weaves quite a story.

Much like Chamath Palihapitiya’s bet on an overvalued Tesla, betting on a company in the midst of its worst PR crisis in recent decades is yet another contrarian bet.

Few industries have a worse reputation among investors than airlines.

As Warren Buffett once famously said:

“If a capitalist had been present at Kitty Hawk back in the early 1900s he should’ve shot Orville Wright; he would have saved his progeny money.”

Gerstner argues that the U.S. airline industry is a different animal than it was 10 years ago. Today, United Airlines is part of an oligopoly of four airlines that controls 80% of airline revenues.

Such consolidation has improved profitability measures like revenue per seat mile. Lack of competition also has given airlines pricing power. Gerstner further argued that Millennials will travel a lot more than their Baby Boomer counterparts.

Based on this bullish forecast, Gerstner’s target price for United Airlines over the next five years is $235 a share. Compared to today’s $78 price, that’s a projected return of almost 25% per year.

There is, however, a big “if” in Gerstner’s analysis. Airlines always have traded at low multiples to reflect investors’ near-universal disdain. Gerstner’s target price assumes more than just UAL hitting its profitability targets. It also assumes that airlines come back into favor and begin to trade at multiples like other transportation industries.

One good sign that Gerstner is on to something?

Warren Buffett has eaten crow and has begun to invest in airlines to bet on an industry turnaround.

You may know Howard Hughes as a quirky aviator and filmmaker.

Today, the company that bears his name is distinctly less adventurous.

Howard Hughes generates its income from real estate, whether through sales or operating income from leases. Hughes then reinvests back into the property to improve land values, as well as to attract residents and new commercial leases.

Ackman essentially argues that Howard Hughes is a deep value play. The company’s current price of around $128 reflects the value of the entire operating business of Howard Hughes. Substantial additional assets, including the Seaport District in Manhattan, a large piece of land in Hawaii, 37-million square feet of future development elsewhere and one of the premiere locations in Houston, are thrown in “for free.”

In recommending Howard Hughes, Ackman has unequivocal confidence in the company. After all, Pershing Square not only has 7.7% of its assets invested in Howard Hughes, but Ackman also serves as chairman of its board of directors.

“Prediction is hard, especially about the future.” — Yogi Berra

Last year, Jeffrey Gundlach, the CEO of DoubleLine, made the then-outlandish prediction that Donald Trump would become president.

Since then, the stock has tumbled by 95%. By some measures, Ackman lost $7.7 million every day for two years before selling his position.

One of the hedge fund industry’s biggest names, Stanley Druckenmiller, had recommended to get out of U.S. stocks and into gold at last year’s conference. Meanwhile, the S&P 500 rose 17%, even as gold traded broadly flat.

“That’s why I’m only introducing” this year, Druckenmiller joked.

We’ll check back in a year’s time to see how this year’s recommendations fared.

P.S. Bill Ackman’s biggest single position at Pershing Square is just one of my recommendations in my new monthly investment service, Smart Money Masters, where I recommend stocks based on the actual holdings of the world’s top investors. It is up 14.72% just since Feb. 10.

The current Smart Money Masters portfolio includes both Warren Buffett’s and George Soros’ top investment bets, as well as those of lesser-known, but potentially even more successful, smart money investors. Click this link to find out more.

In case you missed it, I encourage you to read my e-letter from last week about how the U.S. market is being outperformed by many foreign markets.