On Markets and Self-Made, Manufactured Crises 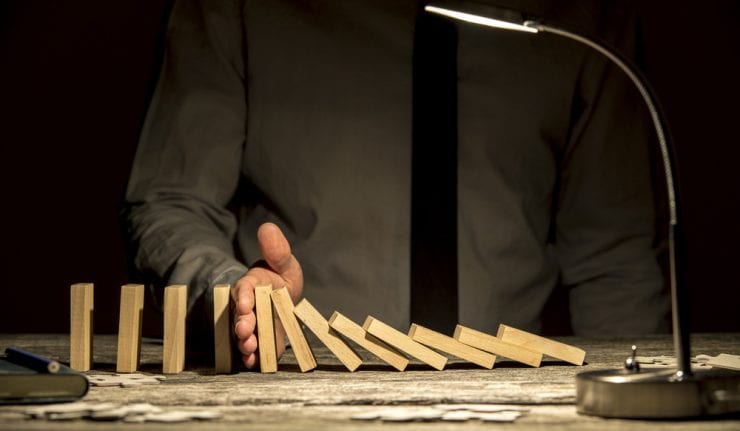 It is said that man is a being of self-made wealth and self-made soul.

By “soul,” I mean a man’s conscious contents (and by “man” I mean human beings). So, when I see what looks to me to be a set of consistent self-made, self-inflicted wounds by the president of the United States, well, I begin to get worried on not just a political level, but on also a much deeper level.

Practically speaking, as a market watcher and purveyor of investing advice, I’m also starting to become concerned about the effect this has on our money. That concern has risen mightily over the past week due to the manufactured crises we’ve seen emanating from the White House.

First, it was the inelegant firing of FBI Director James Comey. It’s one thing to fire someone (which was the president’s right), but it’s another thing to have that person learn about their dismissal on TV, and not directly from his boss. Perhaps I’m just “old school” here, but if you have to deliver someone bad news, have enough guts to look into their eyes and deliver that news right to their face.

Then there were the most-recent revelations of perhaps why Mr. Comey was fired, which is extremely troubling. If you believe the latest news reports (and that is a big “if”) Comey was allegedly asked to back off the Trump-Russia probe. When he didn’t agree, the president terminated him.

I’m not an attorney, but that does sound like the genesis of a possible obstruction of justice claim to me. Given this situation, is it any wonder why markets are reacting with a knee-jerk sell-off today?

Then there was the recent revelation that President Trump may have divulgeone-tinmed Top Secret intelligence gathered by a friendly foreign government (the word is it was Israel) to the Russians.

This revelation is disturbing from a citizen’s point of view; but from a market observer’s point of view it’s one more manufactured crisis capable of destroying any hopes of progress on the one thing that’s really driven markets higher since November — the passage of the pro-growth Trump agenda.

Speaking of that agenda, things appear to be somewhat perilous.

Remember that the president took office with hopes of enacting a $1 trillion infrastructure build out. While that number was mostly wishful thinking, the idea of an infrastructure spending plan that could get bipartisan support was one that looked promising.

Yet the reality is there hasn’t been any progress on this front. Moreover, the current political turmoil isn’t likely to get members of Congress to the table to deliver a win for President Trump anytime soon.

Then there was the pro-growth notion of deregulation, and particularly the repeal and replacement of Obamacare. Well, after an initial failure to even bring the Trump plan to the House for a vote, we did see a reorganized plan narrowly pass.

While this was the president’s first, albeit modest, legislative win, there seems to be little chance of any bill passing the Senate. And even if there is passage of a health care reform bill in the Senate, it isn’t likely to bear much resemblance to the House plan.

Yet the biggest pro-growth Trump agenda elephant in the room remains tax cuts.

At the beginning of the year, markets expected an agreement (at least in principle) on a tax cut proposal by the August Congressional recess. What we all (i.e. market professionals) wanted to see was a reduction in the corporate tax rate down to 15%, or at most 20%. We also wanted to see a general agreement on a one-time repatriation tax holiday for foreign profits.

Here, again, there really has been little to no progress.

Right now, there are major roadblocks on this issue within the Republican ranks, with some in Congress insisting on so-called “revenue neutral” provisions such as border adjustments and removing interest deductibility for corporations.

The most interesting thing about the tax cut issue is that stocks have continued to climb in 2017, despite the lack of actual progress on the tax front. I think this is because there still is a broad expectation that some kind of tax cut deal will be implemented by early next year.

Before the president’s self-inflicted wounds of the past week, I would have said that a tax cut of some sort passing Congress by the end of the year is very likely. Now, however, I’m not nearly as certain.

That’s unfortunate for investors, for citizens at large… and for America.

Fortunately, however, there is a way you can put the power of a proven “safety switch” to work for you. That safety switch is the plan we’ve relied on in the Successful ETF Investing newsletter to help generate market-beating returns for most of the past four decades.

If you want a plan that will get you through all kinds of politically manufactured crises, then I invite you to check Successful ETF Investing today!

As its name implies, BSV tracks shorter-term U.S. government, investment-grade corporate and investment-grade international dollar-denominated bonds. All of the bonds in BSV’s portfolio have maturities in the duration range of 1-5 years.

With $21.59 billion of total assets under its belt and daily trading volume over $112 million, BSV is a huge fund with a lot of liquidity. The fund is passively managed using index sampling. Its efficient management practices yield a low expense ratio of just 0.07%.

One of the main advantages that this shorter-term bond ETF offers over the long-term bond ETFs is reduced fallout from the Fed’s interest rate hikes, which are expected by many forecasters later this year.

You may be interested to know that BSV is held by many large investment banks, such as Bank of America (19.55 million shares), Wells Fargo & Company (14.94 million shares) and Morgan Stanley (8.02 million shares). Banks do this to diversify their portfolios and hedge against interest risk. 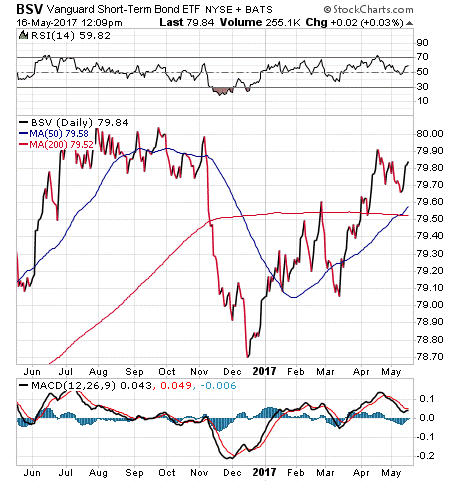 BSV provides constant current income with high credit quality. If you are seeking a safe go-to investment in the bond market, we encourage you to look into Vanguard Short-Term Bond ETF (BSV) as a potential purchase.

I’ve been listening to the DoubleLine Capital CEO/CIO for years, as he’s one of the smartest men on Wall Street. And after correctly predicting both a Donald Trump presidential victory, and the subsequent post-election Trump equity rally, Gundlach is making a different call today… one that involves short selling the S&P 500 and buying emerging markets.

But even if you buy Gundlach’s theory, simply shorting SPY and buying EEM isn’t the only way — or even the best way — to do it.

Here are what I think are three better ways to use ETFs to play Gundlach’s latest big recommendation.
15 Things to Buy with Your Sell in May Profits

Life in the equity markets has been very good to investors, especially since the unexpected election of Donald Trump as our 45th president.

The S&P 500 is up nearly 11% since Election Day, and many stocks are up far more than that since the “Trump reflation trade” has been in effect.

Now, however, we’re in May, and that means many investors are planning to follow one of Wall Street’s oldest adages: “Sell in May and go away.”

If you are sitting on a whole lot of post-election profits, and you are getting ready to sell in May and go away, the question then becomes … what do you buy with all that money?

Here’s a fun look at some of my favorite things to buy with your sell-in-May profits.

On Pushing Aside Static

“Getting things straight in your head is a major achievement because there is so much clutter out there. You’ve got to push aside the static to really hear the music.” — Steve Wynn

The brilliant hotelier and casino mogul transformed Las Vegas with his ability to push aside the static and really hear the music. That’s good advice when it comes to your personal life, your business decisions and your money. So, forget the clutter and get things straight in your head. Doing so will make you more successful and, ultimately, a lot happier.

In case you missed it, I encourage you to read my e-letter from last week about how low-volatility stocks may be facing a bumpy ride ahead.

U.S. stock markets ended the week slightly higher, driven primarily by consistent gains in selected technology stocks. The Nasdaq set another new record, jumping 0.94%. The Dow Jones rose by 0.16%, and the S&P 500 also eked out a 0.27% gain. The MSCI Emerging Markets Index continued to be the Belle of the Investment ball, rising yet another 2.43%. Emerging markets are having a strong year, and some smart money masters I am monitoring are also increasing their bets on the sector. Your