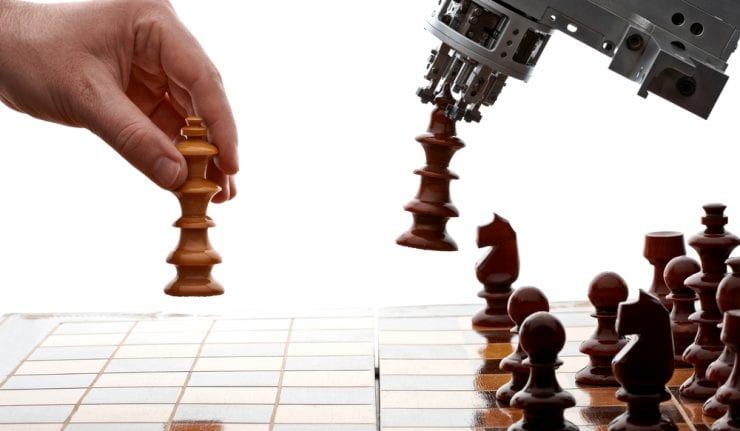 A specter is haunting today’s financial markets — the specter of “algorithmic trading.”

Today, quantitative or algorithmic trading is responsible for more than half of the trading in U.S. stock markets. This development signals a fundamental shift in the character of financial trading.

It marks the rise of the importance of computers and artificial intelligence in the way the world’s most sophisticated investors make their investment decisions.

I recently listened to a podcast with Garry Kasparov where he discussed his new book, “Deep Thinking:  Where Machine Intelligence Ends and Human Creativity Begins.”

Kasparov was the world’s #1 chess player for over 20 years.

He is best known to the U.S. public for losing a chess match to IBM’s Deep Blue computer in 1997.

In the interview, Kasparov concedes that human chess players today don’t have a prayer against today’s powerful chess computers.

They are never “off their game.”

Meanwhile, a human chess player only has to screw up once to lose a match.

The same reasoning applies to trading in the financial markets.

The ability of emotions to derail your trading just may explain why algorithmic traders — also known as quants — have been outperforming human traders over the past decade.

The TABB Group estimates that these hedge funds are now responsible for 27% of all U.S. stock trades by investors. That’s almost double the level of 14% in 2013.

By way of comparison, individual investors collectively account for 29% of all stock-trading volume.

Throw in high-frequency traders and exchange-traded funds that also invest based on algorithms, and you realize that up to 70% of trading on U.S. stock markets is quantitatively driven.

The Rise of the Quants

When I started my investment career in the 1990s, quant investing was mostly about identifying momentum in stocks — riding recent price gains like a surfer rides a wave. I developed my first profitable trading system in 1994 using a now-defunct computer program called “Windows on Wall Street.”

Today, the cutting edge quant hedge funds use machine learning and artificial intelligence. This is more the world of Astrophysics PhDs than of traditional financial analysts.

This quant-driven approach to trading has grown for two reasons.

First, over the past decade, regulators have made it hard for investors to generate an informational edge by prodding company executives for non-public information. What was acceptable before Dodd-Frank is now no-go territory.

Second, any edge stemming from original research has all but disappeared. In 1815, Baron Rothschild used carrier pigeons to learn about the outcome of the Battle of Waterloo ahead of other investors. George Soros attributed his early success by investing in European companies to being the “one-eyed king among the blind.”

Today, investors have more information on their smartphones than what they can consume in a lifetime. And one-eyed kings just don’t cut it anymore.

Paul Tudor Jones — one of the original “Market Wizards” — is one of the best-known investors in history. Yet his Tudor Investment Corp. has fallen on hard times, barely making any money in 2014 and 2015.

What is Tudor Jones’ new philosophy?

Hedge fund billionaire Steven A. Cohen calls this the “man plus machine” approach.

On the contrary, quant-driven strategies can create a false sense of security about the market’s stability. The more money is invested in algorithmic models, the more likely it is some algorithms will be similar to one another. And that’s a formula for “flash crash” style market disruptions.

Quant-driven “portfolio insurance” exacerbated the market crash in October 1987. Long Term Capital Management’s quant models brought global financial markets to the brink of collapse in 1998. In the Flash Crash on May 6, 2010, quant traders caused the Dow Jones to plunge 998.5 points within 36 minutes.

Second, late entrants to quant investing are likely to be disappointed. It takes more than a handful of PhDs to compete against long-time money machines like Jim Simons’ Renaissance Technologies.

Third, quant investing is becoming just a bit too fashionable – always the sign of a market top. The newer quant-focused firms are even reluctant to call themselves “hedge funds,” aligning themselves instead with cutting-edge tech companies in Silicon Valley. One firm — Empiric — calls itself a “technology company operating in financial markets.”

The Lessons of Garry Kasparov and ‘Deep Blue’

Garry Kasparov has long conceded that computers can outplay human players in a complex game like chess. The question is whether computers can do the same in financial markets.

For all its complexity, chess has a limited set of rules that a powerful computer can “solve.” In contrast, financial markets are infinitely more complex.

Thus the analogy between financial markets and chess is incomplete.

So Tudor Jones is correct that “no machine is better than a man with a machine.” According to this belief, computers are tools to improve human judgment.

My suspicion is that the real advantage of quant-driven strategies is that they protect you from your own emotions.

And that may be the greatest edge of all.

Bad Investment Results? Your Birth Year May Be to Blame

An Algorithm, an ETF, and an Academic Study Walk Into a Bar

A Simple Guide to the End of the Boom

What I’m Listening to

The James Altucher Show: Garry Kasparov — Become The World’s Greatest at What You Love Most

P.S. My Alpha Algorithm trading service tracks 35 “quant-based” algorithmic investment strategies and recommends the stocks on which at least 8 of these strategies converge.

Currently, 18 out 23 positions are profitable with gains of up to 29% just since January. For more information on how I track top investment strategies to generate “best of breed” investment ideas, you can follow this link.

In case you missed it, I encourage you to read my e-letter from last week about three stock picks from this year’s top hedge fund conference.