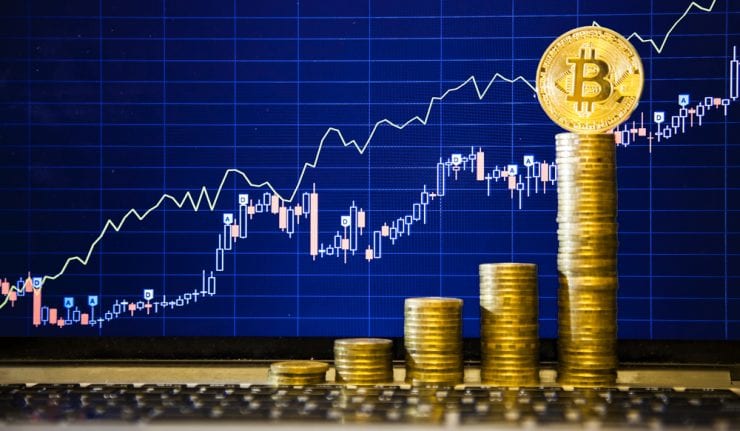 Bitcoin, the most successful computer-generated cryptocurrency, hit an all-time high today, and is now trading around $2,500 due to Japan announcing it would accept Bitcoin as an official payment for retail purchases in that country. 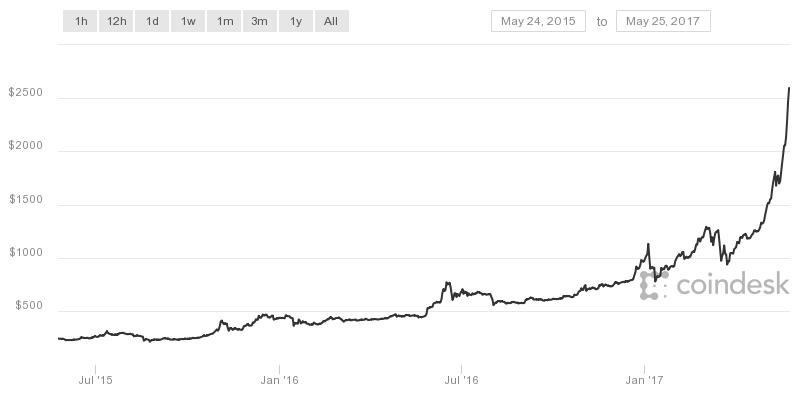 To find the price of Bitcoin, go to http://www.coindesk.com/price/.

Still, the evidence is growing that Bitcoin is entering a new megatrend of official approval as an alternative to the dollar and other currencies. There are several cryptocurrencies competing for your money, including Bitcoin, Ethereum, Factom and Maidsafe. Bitcoin is in the lead, but many analysts expect Ethereum to surpass Bitcoin. Will there be a winner-take-all cryptocurrency?

Fidelity Investments’ CEO Abigail Johnson is a big fan of Bitcoin and now allows Fidelity to accept Bitcoins when employees buy lunch at their headquarters. The company is also partnering with other organizations and universities to mine Bitcoins and encourage shareholders and investors to become more involved.

How to profit? On Monday, I recommended a fund that invests in Bitcoin, and we doubled our money in four days. Talk about a wild ride! The fund sold off today, but the upward trend may continue.

WARNING: Bitcoin is highly speculative and is only for investors willing to take high risks. Expect volatility (Bitcoin saw a 30% swing in prices today alone), and buy on the dips. But the long-term trend is clearly upward.

10th Anniversary FreedomFest, July 19-22, Paris Resort, Las Vegas: We are less than two months away for “the greatest libertarian show on earth.” Highlights include a Festschrift celebrating Steve Forbes’ 70th birthday at the Saturday night banquet. (A Festschrift is a German term for celebrating a scholar’s life and ideas.)

Plus, don’t miss the historic photograph of John Stossel and the other top 100 Most Influential Libertarians on Friday, July 21, followed by the appearance of William Shatner. And we’re screening a record 23 libertarian movies and documentaries at our Anthem film festival this year!

We expect a record crowd of several thousand people this year to celebrate our 10th anniversary. Come join us! Register at http://freedomfest.com/register-now/. Or you can call toll-free: 1-855-850-3733, ext. 202 and talk to Amy, Karen or Jennifer. And be sure to use special code FS2017 to get $100 off of the registration fee! The cut-off date for the discount is June 30.

In case you missed it, I encourage you to read my e-letter from last week about the debate over long-term versus short-term investing.

I just finished the latest semester as a Presidential Fellow at Chapman University and I am delighted that the university’s leaders awarded an honorary MBA degree to Judy O’Connor, the mother of a quadriplegic MBA student who graduated on May 20.

Marty O’Connor, 29, became paralyzed from the shoulders down after he fell down a flight of fire-escape stairs on Aug. 12, 2012, leaving him unable to use his arms or legs. He chose to battle back by seeking his MBA but he needed his mother, a retired elementary school teacher, to serve as his official note-taker.

The mother joined her son at Chapman University for his MBA graduation and, as they stopped to take a photo on the main stage, an announcement came over the loudspeaker that she would receive an honorary MBA as a “thank you” from her son and the university.

The surprised mom blew a kiss to the crowd of Chapman graduates who stood to applaud. She deserved it.

Marty O’Connor suffered spinal cord damage on a day in which he earlier had played golf and attended a Los Angeles Angels of Anaheim matinee baseball game. He also had hung out with friends in nearby Newport Beach.

“After I got hurt, I kind of thought everything was lost and I didn’t really have a future,” Marty O’Connor said following his graduation. “In the past two years, I’ve really found out how much I can still achieve. There’s new strengths that I have that I didn’t have before.”

But he showed resilience after the accident by working out at rehabilitation facilities and beginning to use a wheelchair. In 2013, O’Connor and his mother attended the Angels home opener and met several players, including slugger Mark Trumbo, whose sixth grade teacher was none other than Marty’s mom. Last season, Trumbo led Major League Baseball with 47 home runs.

This year, credit a home run to Chapman University for honoring the sacrifices of a mother who lovingly did what she could to help her son pursue new dreams after a catastrophic accident that he did allow to define him.