Now that Amazon.com (NASDAQ: AMZN) has hit $1,000 per share, many investors are asking whether the stock is still worth owning, let alone buying at its current price.

The company has so many strengths and no comparable online competitor in the United States that its results and its prospects give investors much to like. Indeed, the company’s share price rise, as shown in the following chart, seems far from topping out. 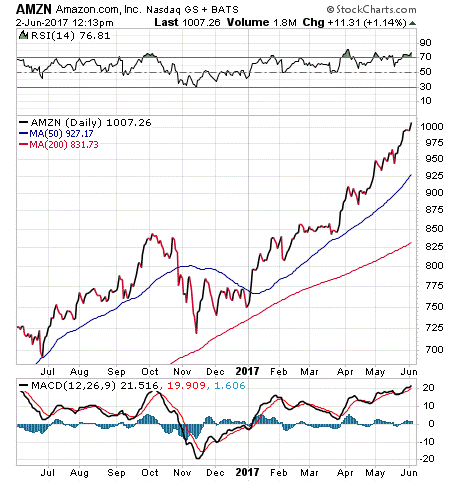 The first reason why you should still be buying Amazon is because while its enterprise value is high at $475 billion, it is not absurd to think that it can’t go even higher. Apple (NASDAQ:AAPL) is currently worth nearly $800 billion and Alphabet (NASDAQ:GOOG) (NASDAQ:GOOGL) is worth more than $675 billion. All three companies are at their heart, technologies firms, but while Apple and Google may have the head start on Amazon, it is the one that’s growing much faster.

Taking a quick look at the last few quarterly earnings reports from Amazon shows the company is rapidly growing, and more importantly, just not in one unit of its business. While Apple has seen sluggish growth in most of its units besides the iPhone for years, Amazon has a number of business units, both small and large which are showing impressive growth.

Despite Amazon being a nearly half a trillion dollar company, it still is producing growth rates typically not seen outside of late-stage startups. Amazon’s marketplace is experiencing growth rates in the billions of dollars while most retailers seem to be struggling. Furthermore, this growth shows that more and more people are willing to buy more and more items online.

Items such as Amazon’s Alexa, Echo devices and dash buttons all make ordering daily household products much easier. Push a button and toilet paper shows up on your door two days later with free shipping. The alternative is to drive to the grocery store, park, walk in and carry a large awkward package through the store, to your car and then drive home. To me and apparently many other consumers, the choice is becoming a no brainer. The ease of making these purchases will only help Amazon continue to show amazing growth from its retail sales units.

As for Amazon Web Services, it offers a similar, if not better, product for a cheaper price than the competition. It seems to be the way company founder Jeff Bezos built Amazon when it started as an online book seller. It appears to be a proven success formula for Bezos and his company.

Amazon’s growth is at such a level that even if it were to slow, it’s still way above what traditional retailers and other online sellers are likely to deliver. That competitive advantage is what investors should emphasize, not so much the current price of one share. Based on Amazon’s sales growth, the company’s share price does not seem overpriced at $1,000.

At the time of this writing, Matt Thalman owned shares of Apple, Alphabet, and Amazon.co. Follow him on Twitter at @mthalman5513.

previous article
Teaching Students about Money and the Economy
next article
Can You Have Fat Profits without Customer Service?

Risks of Investing in REITs