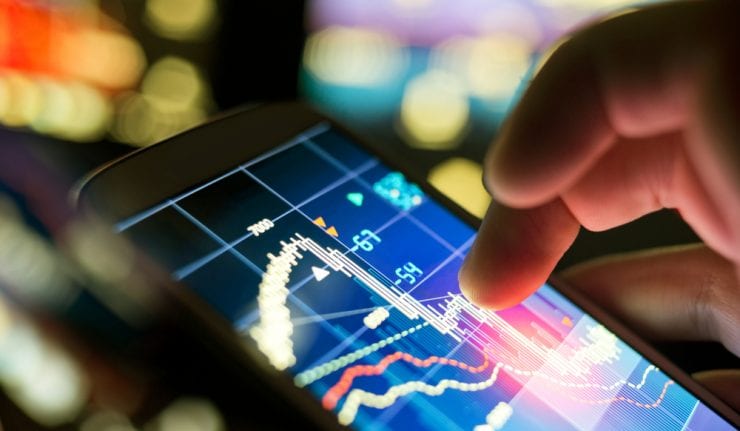 There is a rising tide of sentiment that the fixed-income, commodity and equity markets are at a major inflection point.

Investors are caught up in a whirlwind of cross-currents in the market. It pits political good versus evil, right versus wrong and fear versus confidence and complacency.

As Edward Luce of the Financial Times (Wall Street Turns a Blind Eye to Trumpian Risks — June 7, 2017) wrote, “Washington and Wall Street cannot both be right. On the one hand, the future of the liberal international order hangs in the balance. Donald Trump is a loose cannon with record low approval at this stage for any presidency. Washington and the world are in a state of fear. On the other, Wall Street sees only blue skies ahead. U.S. stock indices keep breaking record highs.”

Even as the Fed raised short-term interest rates for the second time this year to a new range of 1.00-1.25%, the U.S. central bank did so as the rate of inflation tapered from 2.0% to 1.5%, per its favorite indicator, the Personal Consumption Expenditures (PCE) Index that excludes food and energy prices. The core PCE price index measures the prices paid by consumers for goods and services without the volatility caused by the movements in food and energy to reveal underlying inflation trends. 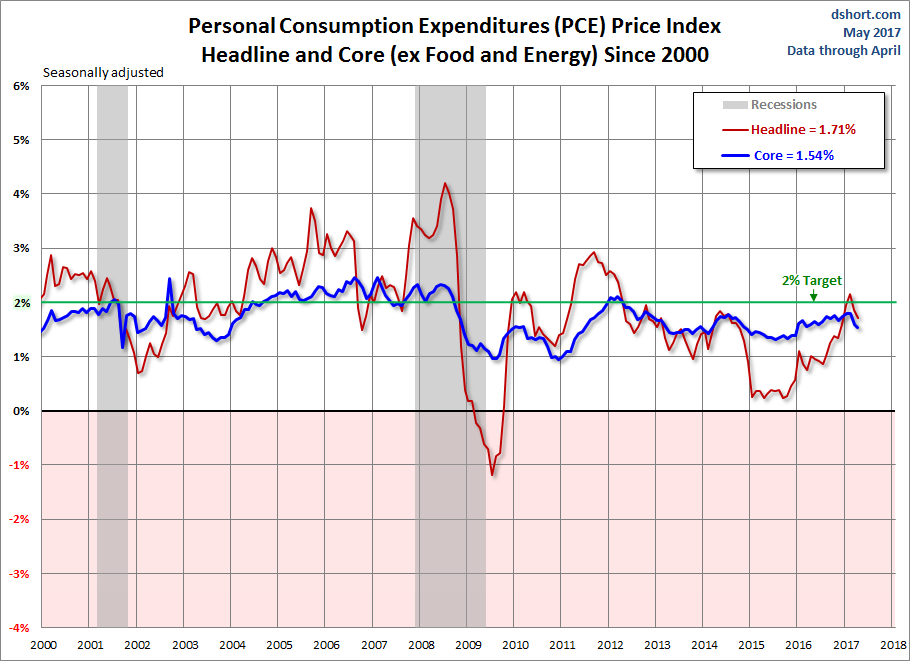 Heading into the month of June, expanding stock valuations have been supported by the notion of rising inflation, prospects for a tax cut stimulus plan, a second proposal for health care, passage of financial reform in the House of Representatives and the expectation of a strong infrastructure program. With the combination of these goals, it made intuitive sense for the bullish camp to keep the wagons rolling, with new record highs being recorded on an almost daily basis. And this was all before Mr. Trump decided to fire James Comey, the former director of the FBI.

Now things don’t look so remarkable, with the exception of one major underpinning to the market rally. The political atmosphere is as hostile as any of us can remember and the chance of passing of tax reform, health care reform, financial reform, infrastructure spending and just about anything meaningful have receded and continue to deteriorate. Several leading Republicans have conceded that we shouldn’t expect anything to come to vote or become law before 2018. Yet, the markets continue to shrug off the reality of the dirty business of politics and how campaign promises can go right up in smoke.

Politics Not as Usual

To the bulls’ defense, it takes more than a political donnybrook, fake news and hour-by-hour fact checking by news media zealots to override the incoming macro tide of rising global earnings. Short-term corporate earnings fundamentals for the United States are strong, while the growth in the euro zone is finally picking up, as it is in Japan.

Even during former President Bill Clinton’s darkest hour in the midst of his White House sex scandal, blue dress drama and all the rest, it was no match for what was taking place with how the internet revolution was changing the world as we know it today. Markets are in a similar cycle right now, where the secular advances in quarterly earnings can’t be denied or derailed by high-visibility geopolitical events.

The resignation of President Richard Nixon on August 8, 1974, had a definite market impact, but it came along after the 1973 OPEC oil embargo hurt the United States as a way to retaliate for the Americans re-supplying the Israeli military during post-war Arab-Israeli peace negotiations. After peaking in January 1973, the S&P 500 fell by 48% over the next 21 months before hitting bottom in September 1974, following Nixon’s resignation. (source: Armstrong Economics — How Did The U.S. Markets Respond During Watergate?) 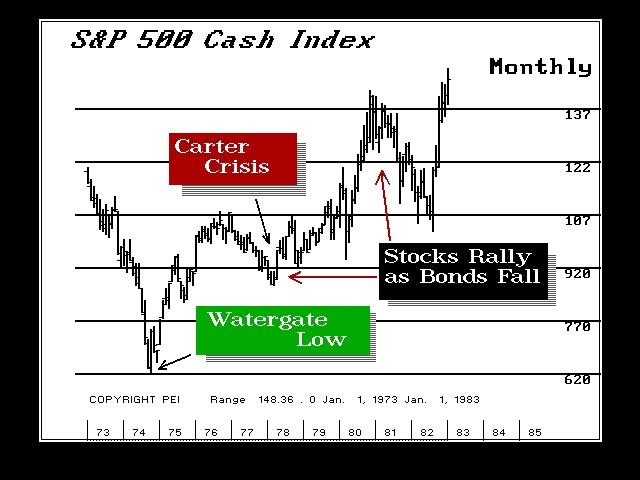 The crisis was merely compounded by the fact that then-President Gerald Ford could not restore voter confidence sufficiently to prevent Jimmy Carter from winning election as president. Unfortunately, President Carter essentially destroyed America’s global street credibility and consumer inflation spiked to 10.0%. Then along came Ronald Reagan in 1980 and the Dow gained 130.9% after he became president. (source: Global Macro Monitor — Presidential Stock Market Returns — Dec. 17. 2016) Today, the stock market under Trump doesn’t have the support of massive central bank stimulus, unlike the case for Barrack Obama. In fact, the market is gaining ground in an atmosphere where history states “don’t fight the Fed.” 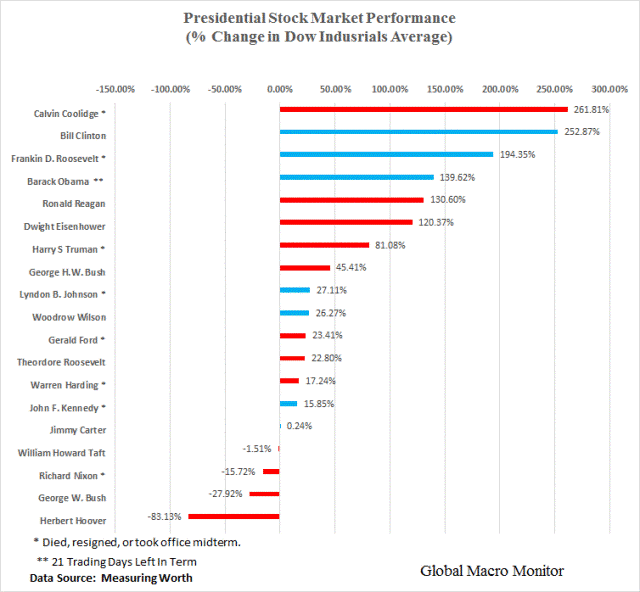 At risk of overusing the phrase “Goldilocks scenario,” it’s hard not to see the market building on its already solid first-half 2017 gains. Markets are a forward discounting mechanism and look out six to nine months for perceived results. I would contend that market participants have somewhat resigned themselves to the idea that nothing of any significance will happen in the way of Trump legislation in 2017 and to look forward to 2018 as the soonest possible time for bills to become laws. As Barrack Obama found out first hand, there are only so many executive orders a president can issue to bypass Congress. President Trump is facing many of the same challenges.

With this understanding, imagine where the market would be trading if there were the faintest of political tailwinds and not the daily dose of cable, social media and talk radio vitriol that fuels the angst of average, hard-working citizens. Beyond the noise of political uncertainty, there is a grand recovery in global growth underway that is gaining traction and attracting capital flows. Charles Biderman, of Informa Trimtabs, on June 15, 2017, stated on CBNC in an interview with Rick Santelli that his service is seeing record inflows in bonds and huge inflows into equity exchange-traded funds (ETFs). It is hard to see a major downturn in either stocks or bonds any time soon, based on such strong fund flows.

To summarize, it’s my view that the market’s current upbeat and sometimes not-so-easy-to-explain performance isn’t so much about the “Trump trade” and whether his campaign promises will prevail. The global reflation trade for equities and bonds is being fueled more so by rising business investment, organic earnings growth, lower inflation from lower oil prices and the European Central Bank and Bank of Japan printing a combined $2.5 billion per day that will continue to find its way into equities and bonds.

With that said, you can turn off the TV, enjoy the ride and continue to comfortably invest in companies leveraged to the domestic and global reflation trade. One of the best ways to capture big profits from steady gains in big-cap stocks is through the use of bull-call-spread option strategies. My advisory service Instant Income Trader is all about an actively managed bull-call-spread strategy. It is an excellent way to invest in stocks that trade over $100 per share at a fraction of the price and allow the power of time and market volatility to generate 20-40% returns in a matter of weeks or a couple months, with regular consistency.

Big winners include bull-call-spreads that involved stocks such as Boeing, Lockheed Martin, Netflix, Apple, Broadcom and Wynn Resorts, just to name a few. We maintain a stable of 10 strategies at work every week and only focus on market leaders. Take a test ride on Instant Income Trader by clicking here to reserve a front row seat on the bull market train that is being led by the best-performing blue-chip stocks money can buy.

With U.S. stocks trading in a choppy manner, you hit two more stops on your Momentum Trader Alert positions this past week. Albemarle Corp. (ALB) stopped out on June 12 at $112.15 for a 10.35% gain. In addition, Nanometrics, Inc. (NANO) stopped out on June 14 at $26.50 for a 13.57% loss. This week’s Momentum Trader Alert recommendation takes you to London, England, with Aon PLC (AON). This insurance giant provides risk management services, insurance and re