Sitting Between Investing’s Doom and Gloom 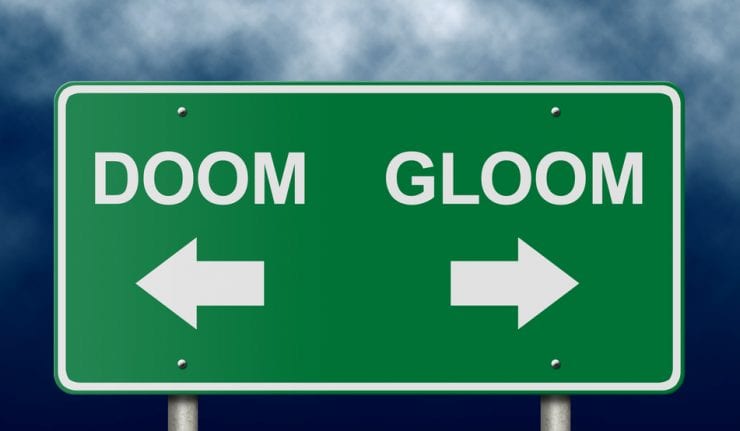 The Federal Reserve has spoken, and it’s done so today via the Federal Open Market Committee’s (FOMC) decision to leave interest rates unchanged.

And while any change in the benchmark fed funds rates from the current range of 1% and 1.25% wasn’t expected, what was highly anticipated was language in the FOMC statement signaling how and when Fed Chair Janet Yellen and colleagues plan to unwind the balance sheet.

On that front, there was a development, as the Fed changed the language in Paragraph 5 of the FOMC statement to clearly signal that balance sheet reduction will begin “relatively soon.”

What this basically means is that the Fed will begin unwinding its balance sheet (likely very slowly) beginning with the September FOMC meeting. That also means that we most likely will get one more quarter-point rate hike this year, and that may well come at the December FOMC meeting.

Now, the one potential wildcard in the FOMC statement was the Fed’s outlook on inflation, but that also turned out basically to be as expected. The Fed did acknowledge the recent weakness in inflation, saying inflation measures “have declined and are running below 2%.” Yet importantly, the Fed kept its language that the near-term risks to the economic outlook appear to be “roughly balanced.”

The bottom line with respect to today’s Fed statement is basically that it was “as expected” by Wall Street. And while we’ve all learned to live with the Fed and to interpret its short-term machinations, the broader issue of massive central bank money printing still is a huge underlying unknown for global financial markets and the global economy.

Indeed, the issue of the Fed and the potential mess that might be headed down the road was one of the subjects of an investment panel I was on this weekend at the FreedomFest conference in Las Vegas. Here I am, seated between two of the world’s most-famous market Cassandras, Jim Rogers (to your left) and Peter Schiff (to your right). While both of these gentlemen have interesting thoughts on the markets, the Fed and the future of the global economy, both are bearish on U.S. equities and on the economy. Also, both warn of a coming debt-fueled collapse somewhere down the road.

Now, I do admire both men’s always-strident opinions, and I think much of what they say is interesting theoretically. The issue I have with their ideas is that I think by constantly sounding the gloom-and-doom alarm, they’re missing out on the current opportunities open to all of us to own great companies in a bull market.

I do not share the idea that one should shun great companies because somewhere down the road there may be another financial crisis, or a dollar crisis, or a debt crisis. And though I do think the Fed’s grand quantitative-easing (QE) experiment could potentially end very badly, I don’t want to sit on the sidelines and miss out on the opportunities in front of our very eyes.

Many exchange-traded funds (ETFs) that target a specific sector focus on well-known names to attract the interest of investors. However, there are some investors who are more interested in funds that provide exposure beyond the typical large-cap stocks in the market.

KBE’s marriage of these two ideas comes as a result of its equal-weighted approach to the banking stocks it holds. This means that an investment in KBE offers easy exposure to large-, mid- and small-cap banks in significant amounts.

Admittedly, this makes the fund potentially riskier than some ETFs, but also more interesting. For instance, unlike a more focused ETF such as the SPDR S&P Regional Banking ETF (KRE), KBE offers investors access to a wide array of companies and sub-industries in its portfolio. This list includes: asset management & custody banks, diversified banks, regional banks, other diversified financial services, and thrifts & mortgage finance. Diversification is one of the most appealing points of many ETFs, and KBE is a great example of this appeal.

Also, the relative performance of this fund is quite interesting. Year to date, with a gain of just 0.76%, the fund has greatly underperformed both the S&P and the best-known financial ETF, XLF. However, over a 12-month scope, it has dramatically beaten both by posting a 37% gain, compared to just 6.5% for XLF and 14.2% for the S&P. Interested investors also can pick up a 1.36% dividend here, set against an expense ratio of 0.35%. Assets under management for this fund total $3.25 billion. Because this fund uses an equal-weighting strategy, its top holdings are essentially arbitrary. More interestingly, the fund has 77.5% of assets in regional banks, about 10% in diversified banks, 7% in thrifts and mortgage finance, 4% in asset management and custody banks and 2% in other diversified financial services. This heavy weighting in the regional bank sector should be noted by any investor who is serious about possibly investing in this ETF.

For those looking for a less-typical way to gain exposure to the financial sector, the SPDR S&P 500 Bank Fund ETF (KBE) is an investment vehicle that could prove to be useful.

In economic terms, freedom means the absence of government intrusion on the free exchange of money, ideas, goods and services conducted by individuals, companies, countries, etc.

I subscribe to a “libertarian,” free-market mindset that argues the freer the economy, the more prosperous the economy. I’m not alone here, of course, as many of my Eagle Financial Publications colleagues (particularly my friend Mark Skousen), subscribe to similar views.

Last week, I made the trek to Las Vegas for Mark’s annual FreedomFest, which has become the premier conference gathering of free-market-oriented thinkers in the world.

At FreedomFest, I was surrounded by extremely smart, like-minded individuals dedicated to advancing the cause of freedom, and to stunting the growth of big government.

One person who I don’t expect to see at FreedomFest, but who I think should attend, is JPMorgan Chase & Co. CEO Jamie Dimon.

Dimon is known for being brash and outspoken, and someone who doesn’t mince words when he has strong views on an issue. Those views came out rather blatantly recently, as the banker offered this blunt criticism during the last JPM earnings call:

“It’s almost an embarrassment being an American citizen traveling around the world and listening to the stupid s— we have to deal with in this country… And at one point we all have to get our act together or we won’t do what we’re supposed to [do] for the average Americans.”

Dimon added, “Since the Great Recession, which is now 8 years old, we’ve been growing at 1.5 to 2 percent in spite of stupidity and political gridlock, because the American business sector is powerful and strong… What I’m saying is it would be much stronger growth had we made intelligent decisions and were there not gridlock.”

The JPM chief then topped off his comments by saying the United States has become “one of the most bureaucratic, confusing, litigious societies on the planet,” and “it’s hurting the average American that we don’t have these right policies.”

Now, one can differ on what the “right policies” are. I suspect Mr. Dimon’s policy prescriptions are far less free market than mine would be, or than most liberty lovers would be. However, these comments do accurately reflect the frustration out there among the CEO class. That frustration is that Washington is in the way of economic progress… and by extension, standing as an obstacle to more economic freedom.

I suspect that the more outspoken powerful folks such as Jamie Dimon are in the effort to shake Washington out of its paralysis, the more likely it is that at least a modicum of additional freedom can be achieved.

For that, I salute this Dimon cry for freedom.

“It is said that power corrupts, but actually it’s more true that power attracts the corruptible. The sane are usually attracted by other things than power.”

Speaking with author and scientist David Brin at the FreedomFest conference was one of many personal highlights from last weekend’s activities. I love David Brin’s novels, as well as his views on technology and society. In this great quote, David gives us insight into those who are attracted to positions of political power. It’s also why I’m always suspicious of anyone who gets into that line of work.