A much-anticipated decision by the Federal Open Market Committee (FOMC) to launch a third round of quantitative easing (QE3) today buoyed the markets but leaves unclear what other potential catalysts may exist to keep equities rising.

The Fed’s announcement that it will buy additional mortgage-backed securities at a pace of $40 billion a month indefinitely should help to keep long-term interest rates low in an attempt to spur slow U.S. economic growth. The move is the latest in a series of monetary policy decisions by central bankers in the United States, Europe and China to respond to economic weakness that is occurring throughout the world. 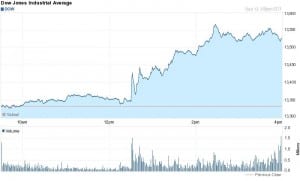 Fed also announced that it would continue its current program through the end of the year of extending the average maturity of its securities holdings of agency debt and agency mortgage-backed securities.

“These actions, which together will increase the committee’s holdings of longer-term securities by about $85 billion each month through the end of the year, should put downward pressure on longer-term interest rates, support mortgage markets, and help to make broader financial conditions more accommodative,” the Fed explained in a statement.

Information received since the FOMC met in August indicated that economic activity has grown moderately in recent months, job creation has been slow, unemployment remains elevated, and business investment has tapered off. Consistent with its statutory mandate, the committee seeks to foster maximum employment and price stability. But strains in global financial markets continue to pose significant downside risks to the economic outlook, the Fed explained.

On the plus side, low interest rates help the affordability of buying homes, obtaining credit, refinancing and paying the interest on the government’s record federal deficits.

On the negative side, the Fed is running out of actions that potentially can stimulate the economy and reduce the unemployment level. In addition, the market has been supported by the expectation that the Fed would act to support the economy. Now that the Fed has responded, natural questions will arrive about what the central bank can do to aid the economy further if the current problems persist.

At least for today, investors have good news and the market responded with big trading gains.