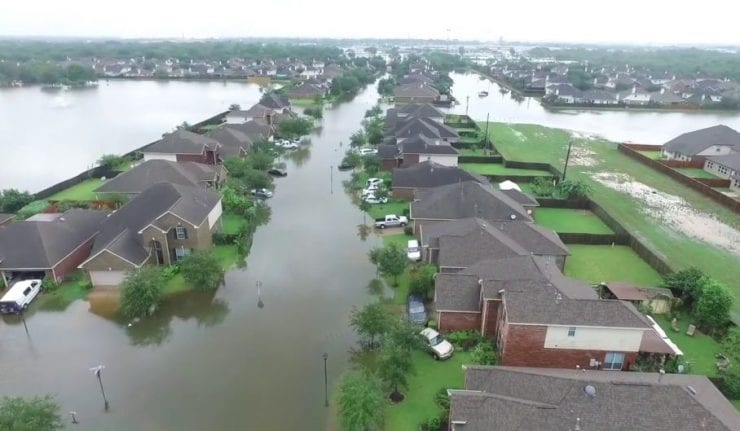 Hurricane Harvey’s death toll of at least 70 lives lost so far will be accompanied by tens of billions of dollars in property damage that AccuWeather estimates will be worse than any previous storm to hit the United States.

AccuWeather predicts that Hurricane Harvey, which has slammed Texas and flooded much of America’s fourth-largest city of Houston, could become the costliest natural disaster in U.S. history. The extent of the damage from winds and flooding also could hurt the U.S. economy sufficiently to delay the next interest rate hike by the Federal Reserve Bank, predicted Dr. Joel Myers, the founder, president and chairman of AccuWeather.

Specifically, AccuWeather expects the ultimate property damage of Hurricane Harvey to top the combined, inflation-adjusted toll of $70 billion from Hurricane Katrina in August 2005 and Superstorm Sandy in October 2012. 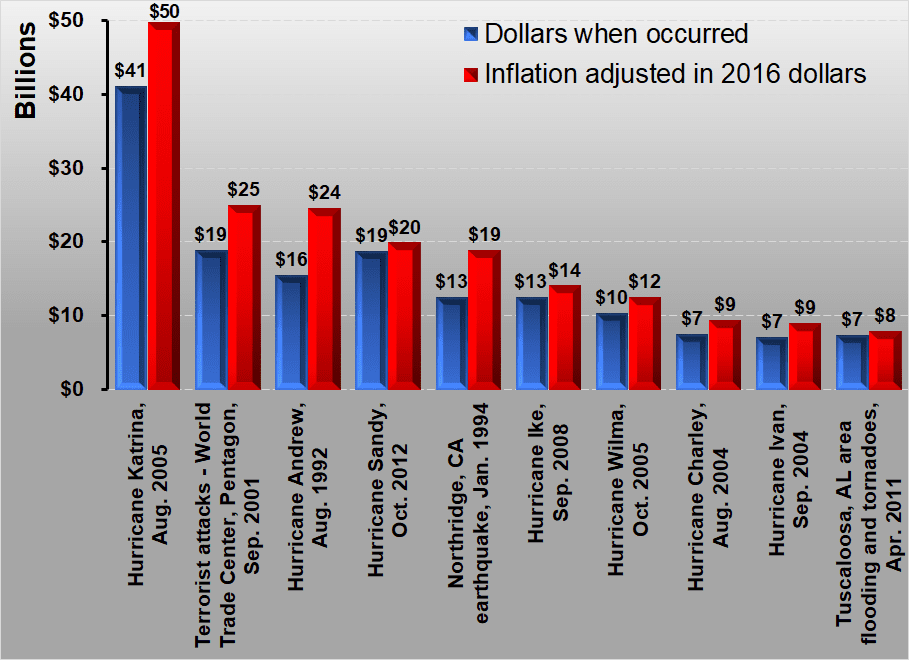 The costs include property losses only and excludes flood damage covered by the federally administered National Flood Insurance Program.
The adjusted numbers have been adjusted for inflation through 2016 by ISO using the GDP implicit price deflator.
Data Source: Property Claim Services® (PCS®), a Verisk Analytics® business.

Kai Pan, an insurance equity analyst at Morgan Stanley, told The New York Times that insurance stocks generally decline immediately after a natural disaster due to the possibility of big losses, then recover three to six months later as losses “become more defined.”

AccuWeather raised its estimate of Hurricane Harvey’s impact to the nation’s gross national product (GDP), as of Aug. 31, to $190 billion, or a full one percent of GDP, which would far exceed the economic impact of the combined devastation of Hurricane Katrina and Superstorm Sandy. That estimate is based on a current U.S. GDP of $19 trillion and includes both insured and uninsured losses.

As a result, business leaders, the Federal Reserve, major banks, insurance companies and others should begin to factor in the negative impact Hurricane Harvey will wield on business, corporate earnings and employment, Dr. Myers said.

Parts of Houston will be uninhabitable for weeks and possibly months due to water damage, mold, disease-ridden water and all of the ill effects that will follow this “1,000-year flood,” Dr. Myers said.

Catastrophic flooding is continuing in Houston, even though the rain has ended. Flooding also is causing post-storm havoc in communities ranging from Beaumont and Port Arthur, Texas, to Lake Charles, Louisiana.

To put Hurricane Harvey into historical context, if the 1900 Galveston hurricane occurred in 2016, it would have caused $41.7 billion in insured losses, based on adjustments for inflation, growth and value of coastal properties and increases in property insurance coverage, according to Karen Clark and Company.

The insured value of properties in coastal areas of Texas totaled $1.2 trillion in 2013, accounting for 26 percent of the state’s total insured property exposure,” according to an analysis by AIR Worldwide.

But these losses do not include damage from flooding, which typically is not covered in standard homeowners’ insurance policies. Flood insurance instead is covered by the National Flood Insurance Program (NFIP) of the Federal Emergency Management Agency (FEMA). Public programs have assumed big obligations to pay for storm damage. They include:

The Insurance Council of Texas reported that only about 20% of the state’s homeowners have flood insurance, with most of the coverage provided through the NFIP, which is already nearly $25 billion in debt.

Hurricane Harvey may push the NFIP up against its borrowing limit of $30 billion and spur action by lawmakers to reform the program, which is due to be reauthorized at the end of September 2017. In Harris County, Texas, the home county of Houston, the NFIP holds more than 240,000 policies totaling $60 billion-plus in coverage.

Standard homeowners and renters insurance will cover wind damage from Hurricane Harvey. Flood coverage, however, is excluded and currently is available through the NFIP and a few private insurers. Congress created the NFIP in 1968 in response to the rising cost of taxpayer-funded disaster relief for flood victims and an increasing amount of damage from floods.

The NFIP provides coverage for up to $250,000 for the structure of a home and $100,000 for personal possessions. Replacement cost coverage is available for a home’s structure but only actual cash value coverage is available for possessions. Replacement cost coverage pays to rebuild a home as it was before the damage. Actual cash value factors in depreciation, reducing compensation for possessions based on their age.

previous article
Back into a Top Technology Momentum Play — and Locking in a 176% Option Gain
next article
U.S. Economy Moves Forward with Steam 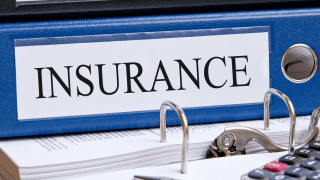 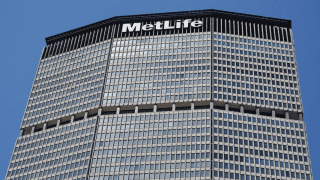